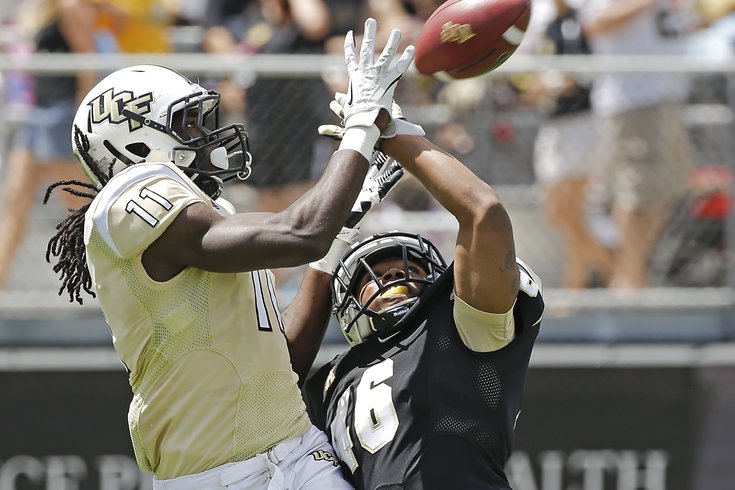 Central Florida's Breshad Perriman has been linked to the Eagles recently.

In Ed Marynowitz's first session with the media as Chip Kelly's right hand man, he laid out the Eagles' three-part evaluation process for draft prospects, noted below:

"Number one, it's the height-weight-speed, according to the position. That's the one factor of it. They either have that or they don't. It doesn't necessarily eliminate them per se, but that's one element of it. So you'll grade that individually."

"The second part is the position specifics, or the critical factors for that position, which is basically the guy's athletic ability to play that specific spot, which is also relative to your system and scheme. Every team is different, so we have certain prototypes for that."

"The third part is the character, attitude, and intelligence piece, in terms of the right football makeup, and how we want to build the team."

All three would be nice, but the Eagles are willing to make exceptions. "Each one in and of itself is evaluated," said Marynowitz. "Just because a guy is exceptional or deficient in one won't preclude us from taking him, but ideally, especially in the in the upper rounds, you're striving for guys that fit in all three of those."

During that same press conference, Marynowitz also noted that the three biggest positional strengths of the 2015 draft are at wide receiver, cornerback, and along the offensive line. Those positions happen to match up with what are arguably the Eagles' three most glaring needs.

Over the next couple days, we'll look at the wide receivers, corners and offensive linemen in the 2015 draft, and determine how many "Ed heads" they get. To note, the "#culture" column is very difficult to determine, having no knowledge of how well prospects interviewed with the Eagles. Therefore, I can only go on whether or not there are any known serious issues. Let's take a look at the wide receivers ranked among the 100 players in the 2015 NFL Draft, via CBS Sports' rankings:

We'll just lump those three guys together, since the Eagles will have no shot at any of them unless they trade up, but all three have excellent size-speed combos, and would fit well into any offense in the NFL. None of them have any known serious character issues.

Perriman is a size-speed beast, but is thought of as a raw route runner with inconsistent hands, for which we'll dock him half an Ed head for "position specifics."

DGB's off the field issues are well-known by now, but he's not a very polished receiver either, per ESPN's Louis Riddick:

Dorsett is an absolute blazer, but he's small (5'10, 185), so we'll give him half an Ed head in the size-speed category. Otherwise, he's an outstanding fit in the Eagles offense. This isn't just a guy who runs 9's. He'll also go across the middle, catch balls in traffic, and get YAC.

Like Dorsett, Agholor is undersized but fast. He is a little bigger than Dorsett and not quite as fast, but we'll put them in the same bucket.

Strong checks off all the boxes, in my opinion, as a size-speed guy who's a great leaper and can make contested catches. The worry with Strong is a wrist injury, as noted by the National Football Post:

Jaelen Strong, WR Arizona State: Reported to have a small bone fractured in his wrist and likely needs surgery. He admits to the fracture but states he played five games with it and there is no surgery needed. This in and of itself is not unheard of but skipping the chance to go to medical rechecks to prove it is quite unusual. Strong had Steelers’ doctors put him through a battery of tests and was cleared. Those results were passed along and he thus skipped the medical recheck. In my almost two decades of attending medical rechecks, that is an unusual move. It is akin to a player skipping a workout in front of all 32 teams and just having his private workout numbers and evaluation for one team sent to the other 31 teams. I am not saying he needs surgery or can’t be drafted highly, but I would think that teams would want to stop and take a hard look based on the injury and the unusual circumstances.

Smith has the speed, but not the size. He is also somewhat of a one-trick pony, although his one trick (burning defenses for long TDs) is an awesome one. Still, he's not thought of as a good or willing blocker, and doesn't have great hands. On the plus side, he is thought of as a great special teams player who will contribute right off the bat.

Coates has a ways to go before he'll be a polished NFL receiver, but the size-speed measurables are certainly there. Personally, I initially thought he'd be a nice fit in Philly, but have soured on him. There are better vertical receivers who can contribute more quickly than Coates, in my opinion.

Funchess' position at the next level could either be at WR or TE, but as a WR he lacks speed. However, I can imagine a fit in the Eagles' offense for Funchess as a Joker TE they can utilize to create size mismatches on DBs and speed mismatches on linebackers.

Conley is a size-speed freak who wins contested catches. He was under-utilized at Georgia because of their dominant run game, but NFL teams will know what he can do.

Conclusion: There are indeed a lot of wide receivers to like in this draft.