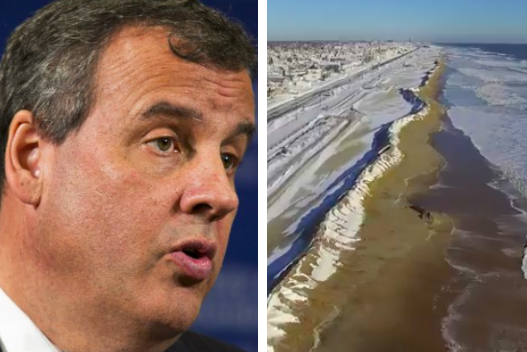 Republican presidential candidate and New Jersey Governor Chris Christie (L) speaks at the University of New Hampshire at Manchester, in Manchester, New Hampshire, May 12, 2015..Aerial drone footage (R) shows dunes along Belmar coast in the aftermath of a powerful winter storm on January 23, 2016.

In the aftermath of the record-breaking blizzard that dropped more than a foot of snow and caused severe flooding along New Jersey's coastal areas, one of the state's key bulwarks against infrastructure damage appears to have succeeded, shows drone footage released by Belmar's Department of Public Works.

Prior to the storm, Belmar constructed a series of dunes to protect its boardwalk and coastal properties. The project stands in contrast to the heated battle between residents of Margate and other Ocean County towns who have staunchly opposed Gov. Chris Christie's call for coastal reinforcement to guard against the effects seen during Superstorm Sandy.

The drone footage below, captured by Belmar Mayor Matt Doherty, shows that with the exception of a breach around 12th Avenue, the dunes held up through the storm. "Our preparations paid off," Doherty told NJ.com.

In an interview on CNN Sunday morning, Christie praised New Jersey's blizzard response, saying the state will be "ready to go" for Monday morning rush hour. He added that about 22,000 New Jersey residents still without power, primarily in Atlantic and Cape May counties, should expect to have service fully restored by Sunday afternoon.

Christie, who returned from the presidential campaign trail in New Hampshire for the storm, brushed aside his low approval ratings in New Jersey as a consequence of running for higher office. "I don't govern for approval ratings," Christie told Jake Tapper. "I govern for results."

During the storm, Christie again chided Margate and Ocean County residents for resisting dune projects even after he filed eminent domain action in October to seize public property along the coast, according to Press of Atlantic City.

"It’s three years post (Hurricane) Sandy; this should not be held up by what I really believe are a few very selfish homeowners who do not want to give into the idea that we have to build these dunes by using the fake excuse that somehow I want to build a boardwalk or a ferris wheel or a hot dog stand or public bathrooms on the strip of land that we’re taking. It’s a ridiculous idea."

On Sunday, Christie claimed the results of the storm response this weekend provide sound reason for Americans to take his Republican bid for the presidency seriously.

“When the chips are down," Christie said, "I deliver.”