2.8-million-square-foot property seen from above 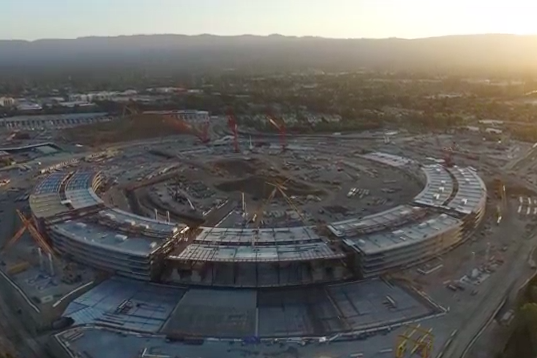 In anticipation of Apple's upcoming September 9 'Hey Siri' event, which rumors strongly suggest will include two new iPhones, photographer Duncan Sinfield released the latest footage from a drone he has regularly flown over Apple's massive circular campus under construction in Cupertino.

The $5 billion campus, designed by Foster+Partners, is expected to open in early 2017. While Apple replaced the Swedish contractor working on the project in June, progress appears to be coming along nicely.

More than a mile around, the new UFO-style campus will be situated in a 2.8 million-square-foot area and will house more than 13,000 Apple employees.

Before his death, Steve Jobs reportedly played an active part in conceiving the design parameters of the project, pushing for top-of-the-line materials while also striving to build an environmentally friendly infrastructure.

According to CNN, the plan is to have the four-story facility run entirely on renewable energy drawn from on-site fuel cell plants and rooftop photovoltaic arrays. The campus will be surrounded by 7,000 trees, replacing what was previously a plot covered with buildings, parking lots and decorative trees not suited to the Pacific climate.

In addition to a 90,000-square-foot cafeteria and a $75 million fitness center, the campus will include a new, underground corporate auditorium, where future events will likely be held in lieu of trekking to San Francisco. The company doesn't have plans to abandon its current headquarters at One Infinite Loop, but instead is hoping to fulfill Jobs' vision to "bring California back to Cupertino."