Drop me a line, undercover poll watchers: I want to see you in Philly 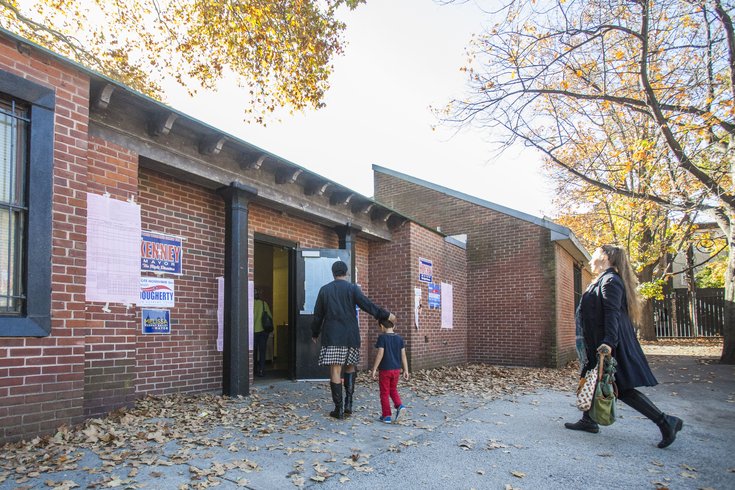 Voters enter the polling location at the Weccacoe Recreation Center at 400 Catharine St. in Queen Village on November 3, 2015.

When it came time to stake claims to Election Day assignments at PhillyVoice’s International Headquarters the other day, I had but one request: Pretty please (feat. sugar on top) let me cover any Trump Election Observer™–related chaos.

Voter turnout stories are necessary, but not exactly as cool as Worldstar-worthy confrontations at the tail end of a rage-filled campaign season.

Yeah, yeah, the last half of that last sentence isn’t the most responsible thing I’ve ever written. I just think it’d be fascinating as heck to see what happens when people who’ve only seen “inner cities” through the lens of dystopian nightmares venture into Philly’s rougher neighborhoods as rent-a-cop tribute artists with chests puffed out, fear reflexes twitching and unarmed trigger fingers itching.

We live in the molten core of a world where a 2008 video taken outside a North Philadelphia seniors home can spark voter-intimidation and voter–fraud conspiracy theories that linger to this day.

It stands to reason that uncertainty surrounding potential polling-place showdowns would provide stories that my kid would pass down to his kids sometime in the 2030s, right? Right. Hence, my assignment request.

Well, a pair of news blips over the past couple days offered a mixed bag from professional dream-fulfillment perspective.

Let's pretend that angry hillfolks will wander North and Southwest Philadelphia with cases of Old English forties and bags of schwag in an attempt to convince residents to just chill instead of voting on Tuesday.

A federal judge finger-wagged the state Republican Party’s request to allow poll watchers from across the state to watch polls outside their geographic jurisdiction. Translating it from spin and legal mumbo-jumbo into real-people talk, they made that push as a result of Trumpian claims that the election is rigged and the rigging is happening in non-entirely-white places like Philadelphia.

This is bad news because it tamps down the likelihood of yokels from the sticks cruising east on the Turnpike and getting a rude introduction to places like 15th and Lehigh. Sad-face emoji goes here.

On the whimsical plus side of the ledger came a story earlier this week on the website Politico regarding some very special visitors who plan on plying Philadelphia voters with weed and booze out of the kindness of their dark hearts.

Neo-Nazi leader Andrew Anglin plans to muster thousands of poll-watchers across all 50 states. His partners at the alt-right website “the Right Stuff” are touting plans to set up hidden cameras at polling places in Philadelphia and hand out liquor and marijuana in the city’s “ghetto” on Election Day to induce residents to stay home. The National Socialist Movement, various factions of the Ku Klux Klan and the white nationalist American Freedom Party all are deploying members to watch polls, either “informally” or, they say, through the Trump campaign.

Granted, as some have maintained, this probably isn’t a real thing that will actually happen.

In fact, Joe DeFelice, the city GOP’s executive director, told me Thursday that he thought it was all a joke.

Alas, Anglin didn’t respond to my request for comment (to be fair, he clearly states on his white supremacy website that he gets way too many emails to have a realistic chance to respond to them all).

But let’s just pretend, for a moment, that it isn’t a joke, and that a whole bunch of angry hill-folks will actually wander North and Southwest Philadelphia with cases of Olde English forties and bags of schwag in an attempt to convince residents to just chill instead of voting on Tuesday.

“If someone was acting like a nutcase, I wouldn’t issue one to them. That’s happened before, actually.” – Joe DeFelice, GOP executive director in Philadelphia, on issuing certificates to poll watchers

If you’re a writer and you don’t want to cover that kind of scene, were you ever really a writer at all? No. You weren’t.

My takeaway from those two stories, though, is that Trump Election Observers™ – whether in official or unofficial capacities – will be Philly Election Day yetis. Some will say they’re out there, but out there they will not actually be. Another sad-face emoji goes here.

DeFelice and I have long been able to have cogent and mutually respectful conversations across an ideological divide that can drive wedges between relatives, friends and author-source relationships.He told me he’s upset about the court decision as well, albeit for different reasons. I’m all about visceral observation; he would welcome outside observers because “it’s well known that Philadelphia can’t run an election on its own.”

DeFelice cited indictments for votes being added to machines, a state senate race that was actually overturned by the courts and related voter fraud that some consider paranoid delusion but others deem a conveniently ignored reality of this deep-blue city.

Then, he said the bill that brought about the recent decision had been pending for several years, that it’s not just a knee-jerk reaction fueled by Trump’s “rigged election” allegations as Democratic spin would have you believe.

“Right now you can circulate petitions anywhere in the state, but you can’t observe polls?” he asked, citing districts that span municipalities but residents therein aren’t permitted to observe polls throughout the very district they call home. “I was fine with people coming into the city as poll watchers.”

When I told DeFelice why I was so into it, he became something of a wet blanket, though. He noted that anybody who’d want to poll watch in an official capacity would have to get a watcher certificate from, yep, DeFelice.

It wouldn’t be as Wild West-y as I’d anticipated, he said. Outsiders would stick out from the crowd; even someone observing polls across the city from their home would know enough about the lay of the land so as not to stoke ire in others.

“If someone was acting like a nutcase, I wouldn’t issue one to them,” said DeFelice, noting that he’s gotten more media calls about poll watchers in the past several weeks than he has in his entire career. “That’s happened before, actually.”

Well here’s hoping these stories don’t scare all of the yahoos off. And here’s a humble request for those brave enough to perform what they consider their Constitutional duty (or something like that):

Drop me a line when you know where you’ll be. Twitter or email is fine. I’d love nothing more than to come out and watch you try to convince someone that a nickel bag of oregano is worth not voting in an election that may very well decide the survival of America itself.