Drug bust pulls about 30 pounds of heroin off Philly streets 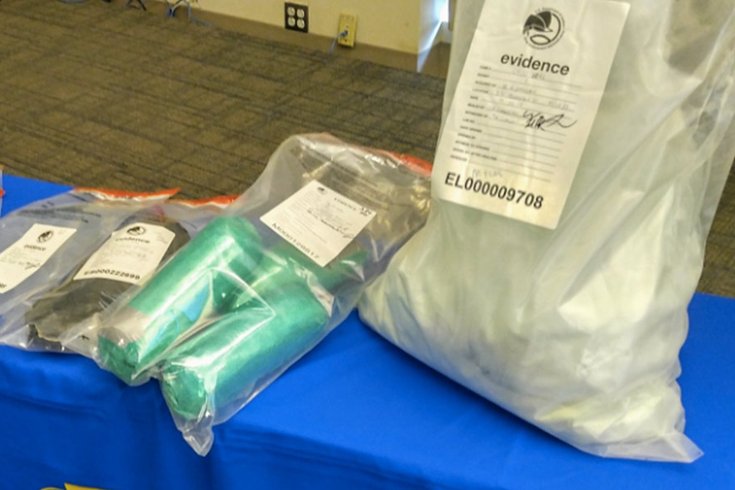 Authorities confiscated more than $3.3 million of heroin during a joint investigation by police and DEA personnel in Burholme, in the Far Northeast section of the city, officials said.

More than 13 kilograms – about 30 pounds – of heroin was confiscated as part of a surveillance operation in the area of 7100 Bingham St. in Burholme in the Far Northeast section of the city.

The arrests send "a clear message that Philadelphia’s law enforcement community is going to keep doing all it can to make our streets as safe as they can be,” said Philadelphia District Attorney Seth Williams in announcing the results of the joint investigation by Philadelphia police and the Drug Enforcement Administration's Philadelphia Division.

"The seizure of this heroin ... will undoubtedly save lives across our region,” said Gary Tuggle, special agent in charge of the DEA’s Philadelphia Division.

During the ongoing surveillance near the Bingham Street home, officers observed Alavarez-Mercedes enter and leave the property on January 24. Officers followed him to the area of Algon Avenue and Magee Street in Oxford Circle, where he met with another man. Alavarez-Mercedes was observed placing a small white box in his car. He then drove away, but was stopped a short while later when officers allegedly found about three kilograms of heroin in the box. He was taken into custody.

As Alavarez-Mercedes was being stopped, investigators at the property observed a woman, later identified as Roldan, leave the property with a baby, diaper bag, handbag and a container. She was stopped and voluntarily consented to having her car searched, authorities said. Officers allegedly recovered four racks of glassine packets containing heroin, $5,000 and the container, which allegedly contained 18.4 pounds of heroin. Roldan was taken into custody and arrangements were made for family members to care for the infant.

After Alavarez-Mercedes gave officers consent to search his home on Bingham Street, police allegedly recovered a half-kilo of heroin, packaging materials and scales. They also allegedly found ledger books, passports for him and Roldan, and 13 counterfeit $100 bills, in an upstairs bedroom.

If found guilty, each defendant could face approximately 60 years in prison.