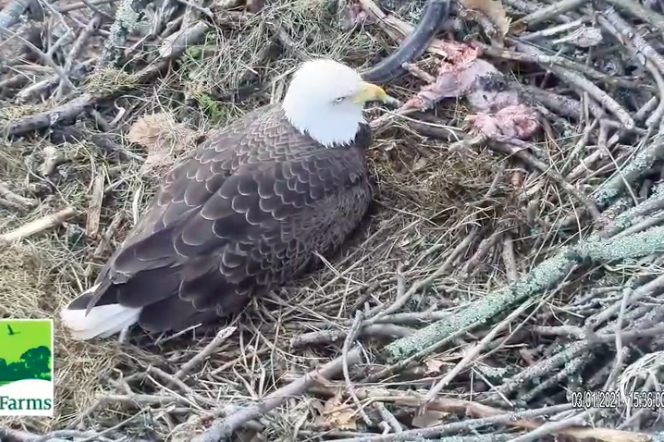 The Duke Farms Eagle Cam, now in its 14th season in New Jersey, reaches 12 million viewers who love to observe the birds in their natural habitat. Three eggs were laid in the nest in 2021. One of them has already hatched, and the other two may follow in the next several days.

The Hillsborough, Somerset County-based eagle cam has been an annual favorite among eagle observers. Some 12 million viewers have tuned in since it launched in 2008.

Three eggs were laid earlier this year — on Jan. 17, Jan. 20 and Jan. 23. The first of the eggs hatched Feb. 26, meaning the other two are due over the coming week, if they are viable.

The eaglet #1 has landed! pic.twitter.com/iSjkb4hpGx

Duke Farms spans nearly 1,000 acres and aims to be a leader in environmental stewardship and preservation of natural habitats.

Staff at the farm discovered the first nest in 2004 and have been tracking the number of chicks that fledge every year. The first camera went up at the farm in 2008. It was moved to a new nest tree in 2013 after the original nest was damaged by Hurricane Sandy. The camera was destroyed by lightning in 2016 and has since been replaced by a camera with infrared light for night viewing.

Twenty-five eagle chicks have been raised and fledged from Duke Farms since 2005, including two in 2020.

When the chicks first hatch, they're covered in white fuzz and are frequently fed and tended to by their parents as they begin to resemble immature bald eagles.

It takes a chick 10-12 weeks to fledge (or fly). Like the adults, the chicks are typically banded before they fledge and have been observed later in Maryland, Connecticut and Maine, though sometimes they die as a result of natural competition in new habitats.

Bald eagle populations across much of the northeast, including New Jersey and Pennsylvania, have made a significant comeback since their near-disappearance in the 1980s.

The federal government removed bald eagles from the endangered list in 2007, but the breeding population in New Jersey still remains endangered and has the state's highest level of protection.

In Pennsylvania, bald eagles are no longer endangered, but they remain protected by the Bald and Golden Eagle Protection Act and the Migratory Bird Protection Treaty Act.

Lucky viewers of the Duke Farms Eagle Cam may have a chance to see two more eggs hatch over the next week, and should keep an eye on Duke Farms on Twitter for updates on the status of the chicks.