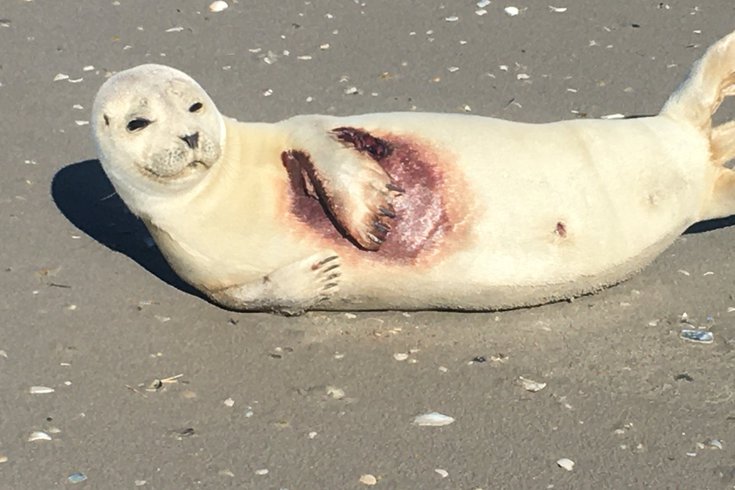 This harbor seal was found injured in Strathmere, Cape May County on Feb. 4, 2021. A veterinarian working with the Marine Mammal Stranding Center in Brigantine completed a successful surgery on the seal's flipper. The animal is expected to be released back into the wild in March.

A pair of injured seals found this month at different Jersey Shore beaches are on the road to recovery under the care of experts at the Marine Mammal Stranding Center.

The Brigantine-based nonprofit clinic, which provides care to a range of sea animals, shared an update about the two seals on Facebook.

🚨New Patient Alert🚨We are currently caring for two seals in our Intensive Care Unit, a male harbor seal yearling and a...

A white harbor seal was found Feb. 4 at a beach in Strathmere, Cape May County while suffering from a large bleeding wound under his left front flipper.

A veterinarian at the Stranding Center surgically removed the injured digit while preserving the use of the seal's front flipper. The seal is now eating on his own. His caretakers believe it will be safe to release him in about a month.

In Belmar, Monmouth County, an underweight grey seal was found Feb. 11 with wounds to her left front flipper. The pup was too young to have learned how to eat on her own, so she's being rehabilitated and given a chance to learn how to take care of herself.

"After offering the pup live minnows in her pool, her instincts finally kicked in and initiated a feeding response," the Stranding Center wrote on Facebook. "Now that she is eating on her own, this little pup will stay with us until she gains some more weight before being released."

Seals typically feast along the New Jersey coastline during this time of year due to lower water temperatures.

Many seal pups find themselves at risk of abandonment or injury caused by other animals or rough terrain along the coast.

Despite their cute appearance, people are advised not to disturb seals on the beach and to stay at least 100 feet away from them.

It's both normal and necessary for seals to leave the water to spend some time on the beach. If a seal appears to be injured or in obvious distress, an authorized stranding network organization should be called to assess the situation.

The Marine Mammal Stranding Center operates through a combination of grants and donations. The rescue effort for the two seals already has raised more than $2,800.

People can make donations to the Marine Mammal Stranding Center at its website.