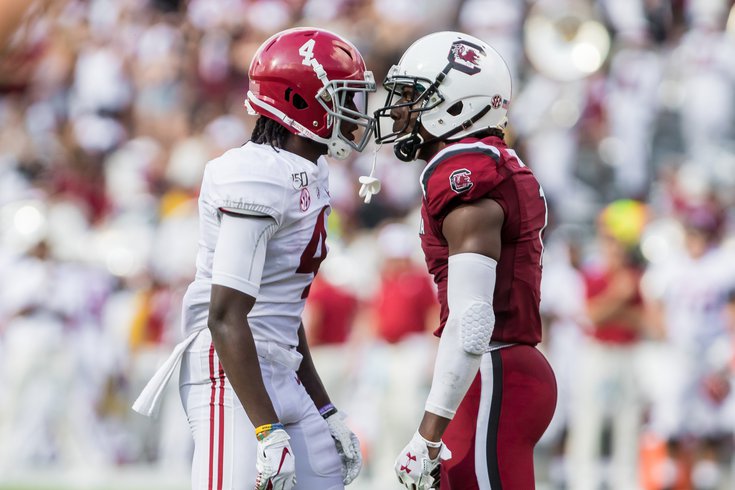 Over the last four months, we've checked in on various mock drafts to see who the national guys/gals were projecting the Philadelphia Eagles to take with their first-round pick. On the day of the draft, let's do that one last time.

Disclaimer: Normally, we provide commentary on each Eagles blurb, but in the interest of pacing my myself this weekend, we'll skip that here.

"Ideally, you don't pick a wide receiver in the first round in consecutive years, but Smith is too good to pass up at No. 12. He gives the Eagles the true No. 1 WR they're lacking."

"Of course the Eagles would also like a top WR, but CB Darius Slay needs a counterpart on the other side, and Surtain is terrific."

"The Eagles desperately need a No. 1 receiver to anchor the passing game. The silky-smooth Smith is an exceptional route runner with vertical playmaking ability."

"The Eagles need some help in the secondary opposite Darius Slay, and with Horn available here, Philly gets one of the elite corners in this class. I gave some serious thought to putting OL Alijah Vera-Tucker in this spot, and it’s possible GM Howie Roseman has a better grade on the USC prospect than Horn, but either choice would help this team."

"Another physical corner, Horn solidified his spot in the top dozen picks with an outstanding display of athleticism at his pro day (4.40 40-yard dash, 41.5-inch vertical leap). The Eagles need multiple cornerbacks, and will likely pick two in the first three or four rounds."

"The Eagles traded out of the top 10 and moved to No. 12, which essentially took them out of the quarterback race. They could also miss out on the top wide receivers; I suspect they would jump at Waddle if he made it here. Just looking at this roster, though, corner should be a priority, and they'd have their pick of all of them if the board shakes out this way. Surtain is the most fundamentally sound defensive back in this class."

"Let's start with the bad news: As we thought might be the case, the Eagles miss out on the top four pass-catchers in the class after their trade out of No. 6 overall. That's a problem. The WR room has Jalen Reagor, Greg Ward and Travis Fulgham as the top three options, not leaving QB Jalen Hurts in the best position to find success in an evaluation period. But here's the good news: The Eagles hold 11 picks this year (the most in the NFL) in a draft with a deep receiver class, the 2022 first-rounder received in the trade will certainly prove valuable, and Philly can still land a guy like Parsons here. He can do a little bit of everything in the middle of this defense."

"I think when the Eagles moved from 6 to 12 on March 29 in the trade with Miami, they hoped for three things: their choice of a top receiver, Northwestern tackle Rashawn Slater, and one of the top two corners in the draft. By this mock, they’re all there. Nothing would surprise me—include a shallow trade-down, say, to New England at 15 if the Patriots are smitten with DeVonta Smith. Horn is my pick here because corner’s a significant need; the Eagles’ best (and priciest) corner, Darius Slay, gave up 77-percent completions last year, per Pro Football Focus, and there’s no other long-term solutions, at least not one who has played to that level, on the roster now. Horn’s a three-year starter in a throwing league, and the book on him is he’s uber-competitive and feisty. Sounds like a Philly guy already."

"Many think they’ll go for cornerback Jaycee Horn. To get the most out of quarterback Jalen Hurts, they need to give him weapons. And, yes, given the presence of 2020 first-rounder Jalen Reagor, the Eagles would have a three-Ja(y)len attack."

"The Eagles could go wide receiver here or add to the trenches, but Philadelphia also needs help at cornerback. Horn and Darius Slay starting on the outside would help make cornerback a strength."

"Albeit undersized, Smith’s production speaks for itself."

"The Eagles have sniffed around on moving up, in front of Dallas, for a corner—so I think this would be a really nice scenario for GM Howie Roseman, and a gift to new defensive coordinator Jonathan Gannon, whose roots in Mike Zimmer’s aggressive scheme could come back to life with a top bookend for Darius Slay."

"Passing on DeVonta Smith may sting a bit, but Surtain is no slouch as a consolation prize. He’s been starting since his true freshman year at Alabama and was the highest-graded cornerback in coverage this past season."

"Wild: The Eagles have drafted one Bama player (WR Freddie Milons, 2002) since 1996. Smith would be a fascinating addition to Jalen Hurts’ offense."

"Philadelphia reportedly traded down from No. 6 because GM Howie Roseman assumed Ja'Marr Chase wouldn't be available, which suggests the team will be prioritizing a wide receiver with its first pick. Smith's presence also gives Jalen Hurts the best chance to succeed in his one-year tryout before the front office decides whether to move on with one of its two first-round picks in 2022."

"Cornerback could be an option here but with Surtain and Horn gone, the Eagles reunite Jalen Hurts and DeVonta Smith."

"Parsons can be the quarterback of Philadelphia's defense. He provides significant edge-rushing talent too."

"Their corner situation is a mess, so they have to get a top corner to go with Darius Slay. They could put Horn with Slay and keep Avonte Maddox inside as the nickel."

"I think when the Eagles moved from 6 to 12, they hoped for three things: their choice of a top receiver, Northwestern tackle Rashawn Slater, and one of the top two corners in the draft.” — NBC’s Peter King … “As usual, GM Howie Roseman’s been active in making trade calls, and word is that a move up might be for a corner.” — SI’s Albert Breer.

I also loved Benjamin Solak’s point on his Bleeding Green podcast about how the Eagles have only been picking players with 60th percentile scores in the forty, vertical, and broad. Athleticism is a priority, and Surtain is a 93rd percentile Adjusted SPARQ athlete. He fills a major hole as the CB2 next to Darius Slay, whomst he’d replace long-term. This would be a light’s out pick, especially with Surtain’s experience in a Cover 2/4/7 system like the one DC Jonathan Gannon is bringing from Indianapolis and Minnesota."

"The Eagles and Cowboys can be in lockstep trying to lock down one side of their pass defenses with a big shutdown type. Philadelphia will like the frame and physicality of Farley in Jonathan Gannon's secondary."