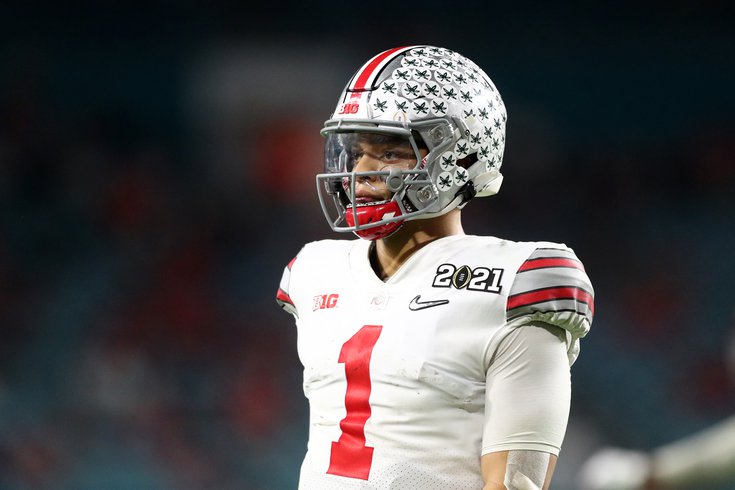 Did you click this thinking I mocked Justin Fields to the Eagles? If so, got eem.

Over the last four months, we have published five "Eagles-only" seven-round mock drafts. For the first (and final) time, here is our one and only full first-round NFL mock draft.

3) 49ers: Mac Jones, QB, Alabama. It's utterly insane to me that the 49ers gave up the 12th overall pick, a first-round pick in 2022, a first-round pick in 2023, and a third-round pick in 2022 to move up to this spot to draft Mac Jones, who offers very little in the way of impressive physical traits. If they already had the No. 3 pick, and they were like, "Well, we like him best of the quarterbacks," and then they just took him, then, OK. But to trade that package of picks? It's hard for me to wrap my head around, but it's been so widely reported that Jones is the pick, and it also matches with what I've heard in my digging that I guess I'll reluctantly slot him in here. 🤷‍♂️

4) Falcons: Kyle Pitts, TE, Florida. The Falcons basically put this pick up for auction, which tells me they don't love any of the quarterbacks they thought might be available here. They'll probably ride with Matt Ryan a while longer, and take the best player available, which is Pitts. They should take a quarterback, but the belief here is that they'll be delusional about their chances of competing for a Super Bowl in Ryan's twilight years.

5) Bengals: Ja'Marr Chase, WR, LSU. I was originally on "Team Protect Joe Burrow," but I've flipped. Chase is going to make a bigger impact over his career than any offensive lineman in this draft, in my opinion, so just take him, and build up the O-line with subsequent picks.

6) Dolphins: Jaylen Waddle, WR, Alabama. Take any pre-draft reporting with a grain of salt, but there's so much smoke around Waddle to the Dolphins that we'll just go with it.

7) Lions: Penei Sewell, OT, Oregon. The Lions feel like a strong trade-back candidate, as quarterbacks should still be available here. They have needs all over, particularly at wide receiver, but this feels a little too early for DeVonta Smith. If the Lions just make a pick, the addition of Sewell would give them a very strong line, though they'd have to figure out who would play RT, between Sewell or Taylor Decker. This is an imperfect fit, but for a team expected to be picking in the top 10 again next year, just get the most valuable player. In my opinion, that's Sewell.

8) Panthers: Rashawn Slater, OT/OG, Northwestern. Carolina has holes all over their line, particularly on the left side. Slater gets a chance to play LT instead of immediately moving to guard early in his career.

9) Broncos: Trey Lance, QB, North Dakota State. The Broncos could also trade up for a quarterback. They can still probably get Lance or Justin Fields if they just stand pat.

10) Cowboys: Patrick Surtain, CB, Alabama: The Cowboys' offense has the potential to be outstanding. Their defense overall is trash, and they have a gaping hole at corner.

11) Patriots (trade with the Giants): Justin Fields, QB, Ohio State. It's like someone was holding a metaphorical garden hose, folded it so that water built up but could not escape, let it go, and suddenly a bunch of "The Eagles love Justin Fields" reports shot out. Anyway, what that likely smokescreen says is that the (a) the Eagles want someone to trade up ahead of them to take a quarterback, and (b) they think that Fields is more likely to slide than Lance.

Anyway, if you're the Patriots and you have an opportunity to go up and get a quarterback as talented as Fields and only have to move up four spots to do so, it's probably better not to chance that (a) the Eagles wouldn't take Fields at 12, and (b) some other team like the Bears or Football Team won't jump ahead of them at 15.

Also, while we're on the Pats, allow me to predict who they'll take with their third-round pick (pick 77):

77) Patriots: Nobody. This pick is forfeited because the Patriots got caught cheating... again.

13) Chargers: Jaycee Horn, CB, South Carolina. The Chargers badly need OL help, but Horn is a better prospect than any offensive lineman who might be available here, and they have arguably just as big a need at corner.

14) Vikings: Christian Darrisaw, OT, Virginia Tech. The Vikings have drafted 14 (!) offensive linemen since 2015, and their offensive line still stinks. They hope that Darrisaw can fill their gaping hole at LT.

15) Giants (trade with the Patriots). Kwity Paye, DE, Michigan: Dave Gettleman has never traded back. And not just in the first round. Like, literally, he has never traded back in any round, ever, in his eight years as a general manager in the NFL. He insists that he's open to it, via Jordan Raanan of ESPN, and that it has almost happened in the past, so we'll believe that it's possible. And for the Giants, it really makes the most sense, since positional needs and prospect value are unlikely to align for them at pick No. 11. They desperately need edge rusher help, and there should be multiple options available to them at pick No. 15.

16) Cardinals: Alijah Vera-Tucker, OT/OG, USC. The Cardinals have four projected offensive line starters who will be at least 30 years of age by the time the season begins. They need to reload, and Vera-Tucker would be good value here.

17) Raiders: Trevon Moehrig, S, Raiders. A deep middle safety is of more importance in Gus Bradley's defensive scheme than it is in others' around the NFL, and while Trevon Moehrig is more than just a centerfielder type, he would fill a huge need. They should try to trade back.

19) Football Team: Jeremiah Owusu-Koramoah, LB, Notre Dame: A little mini run on linebackers here, as JOK is a hyper-energized LB/S prospect who flies around the field and makes plays. He can be a modern three-down linebacker for former linebackers Ron Rivera and MagaJack Del Rio.

20) Bears: Jaelan Phillips, EDGE, Miami. Phillips is probably the most talented edge rusher in this draft, but there are concerns about his medicals. With Ryan Pace and Matt Nagy in survival mode, they'll care less about long-term medical concerns than other teams, and will be more interested in who can help right now. With Robert Quinn having a disappointing season last year, Phillips can potentially slide into an immediate meaningful role.

21) Colts: Gregory Rousseau, DE, Miami: Quarterback excluded 😜, the Colts' most glaring need, by far, is edge rusher, and they should have their choice of a few of them who should be available at the 21st spot.

22) Titans: Elijah Moore, WR, Ole Miss: At the skill positions, the Titans have Derrick Henry, A.J. Brown, and then... not much. Moore is a lightning fast receiver who can make plays from the slot, deep down the field, and in the return game.

24) Steelers: Najee Harris, RB, Alabama: A trade down by the Steelers here is possible, seeing as the teams behind them aren't likely to draft a running back. Yeah, taking a RB in Round 1 is taboo for some, but Harris is an immediate starter out of the box, and he's a power runner with receiving chops.

25) Jaguars: Christian Barmore, DT, Alabama: Barmore is the best interior lineman in a weak DT draft. In six years as the 49ers' GM, Trent Baalke drafted three defensive linemen (two DTs) in the first round. He also took a DE in the first round of his lone draft with the Jags in 2020.

28) Saints: Caleb Farley, CB, Virginia Tech. There are some who believe Farley is the most talented CB prospect in this draft class, but significant injury concerns are going to push him to the back half of the first round, or later. With Drew Brees' retirement and a salary cap situation that finally caught up with them this offseason, the Saints will be rebuilding to some degree, and can take a big swing on Farley.

29) Packers: Asante Samuel Jr., CB, Florida State. The Packers brought Kevin King back on a one-year deal, which would allow Samuel to get his feet wet in the slot his rookie season, with an eventual move outside in Year 2. The Packers would lead the league in CB swag with Samuel and Jaire Alexander.

30) Bills: Joe Tryon, DE, Washington. If the Bills want to be be serious Super Bowl contenders, they're going to have to find a way to get to elite opposing quarterbacks in the playoffs.

31) Ravens: Teven Jenkins, OT, Oklahoma State. Ronnie Stanley will return, but the Ravens will still have to replace Orlando Brown. The Ravens fill their open RT spot with the pick acquired from KC for Brown.