The Archbishop Wood grad is likely going to be one of the first players selected, and for good reason. 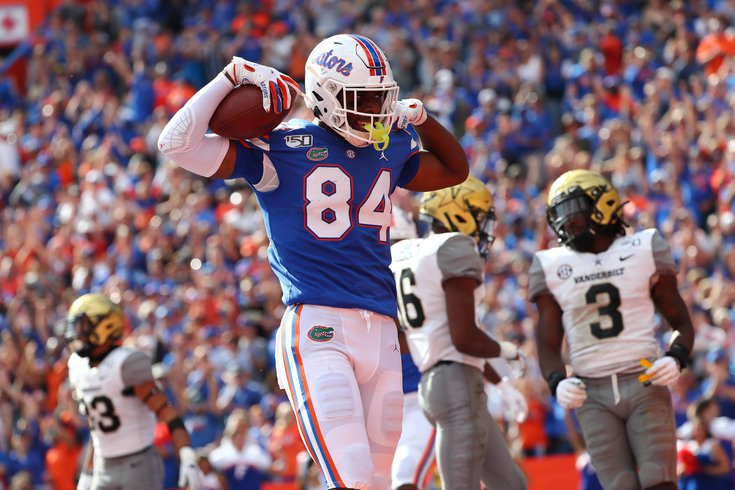 There are no lights behind Archbishop Wood High School where the football team practices. During the fall, it gets so dark that the only thing you can see are the tree tops off the moon-lit sky.

Steve Devlin would often find Kyle Pitts there. The only indicator the former legendary Vikings’ coach knew the 2018 Wood graduate was back there were the voices he heard from his players staying after practice doing more work.

The 6-foot-6, 246-pound Florida junior tight end—by way of Wood—was so good that he could catch passes in the dark.

The NFL Draft on April 29 is approaching fast and Pitts could very well be the first non-quarterback taken. Most prognosticators see the former Catholic League standout and first-team All-SEC selection going within the first six picks.

There’s no way Pitts will be there at No. 12 where the Eagles are.

Maybe due to all of those passes Pitts caught in the dark.

None of this surprises Devlin.

“Not at all, because Kyle would do everything you would ask him to do,” said Devlin, who’ll be entering his fourth year as the defensive coordinator at Ursinus College, where Florida head coach Dan Mullen happened to graduate. “Kyle just worked. He put the commitment in then to be better. Kyle is still the same person. The demands are nuts, with everyone coming at him, the media and NFL teams.

“That can be intimidating. It’s not that way with Kyle. That comes from his foundation from his parents and his grandfather. His family are all great people. Kyle never put himself above anyone else. When I was at Wood, I had to go looking for him. It would get dark out around six, Kyle would have the quarterbacks and the younger guys stay with him working on routes.

“That’s what’s so special about Kyle. It’s why he’s been so successful at every level he’s played—his work ethic—and he’ll continue that in the NFL. That’s just Kyle.”

There are lights at Florida’s practice facility. In late November, Pitts was returning to play after suffering a concussion against Georgia in a game on Nov. 7. As the sun was slowly sinking, everyone was walking off the field.

"...he’s kind of like a unicorn. The only way you can defend a unicorn is with another unicorn. If you don’t have a unicorn on defense, you have a problem."

The media and other obligations would have to wait another 20 minutes.

Success hasn’t changed him at all.

Playing in eight games this past season, Pitts caught 43 passes for 770 yards and 12 touchdowns, while averaging 17.9 yards a reception for the Gators. In the SEC championship alone, he snared seven passes for 129 yards and a TD, averaging 18.4 yards a catch, in a 52-46 shootout loss against eventual national champion Alabama.

“His ability to create matchup problems (is what makes Pitts standout in this draft),” Mullen said. “I think he’s an elite wide receiver and I think he’s an elite tight end. When you’re that, that’s what causes the problem of what personnel grouping that you’re in, who you’re going to match up against him.

“I was in a meeting one day, and some guy came up and said he’s kind of like a unicorn. The only way you can defend a unicorn is with another unicorn. If you don’t have a unicorn on defense, you have a problem.”

Mullen spelled out the problem. If NFL teams want to put a cornerback on Pitts, what happens to that corner when Pitts attaches and becomes a blocker? If a linebacker is attached to Pitts, he can flex out. How will a defense combat that? Roll the coverage to Pitts, or away from him, which would open areas for other receivers on the field? 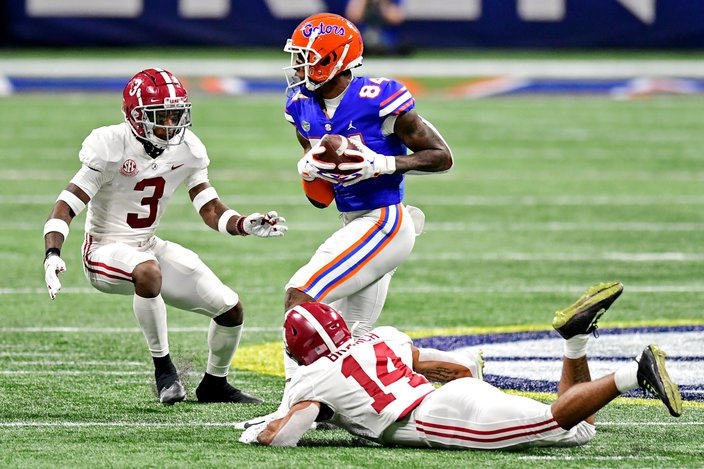 “The ability to move (Pitts) around, because not only is he a fun guy to coach on the field, because he has great character, great work ethic, all of those things, he’s fun to coach off the field,” Mullen said. “You have this piece who can move around and have this matchup advantage against most defenses you play.”

If not Atlanta, the Miami Dolphins, who traded for the Eagles’ No. 6 pick and No. 156 overall (fifth round) in exchange for the 12th overall pick, No. 123 overall pick (in the fourth round) and Miami’s 2022 first-round pick, seem a possibility.

“I talked to [the Falcons] on Zoom a couple of times, and I talked to them a few more times, and they seem to be interested in me,” Pitts said. “They’re going to try and learn more about me. I feel they’re pretty interested in me. It will be a dream come true to be the first non-quarterback to be taken off the board.”

As for weaknesses, “I would say one of my weaknesses is hand placement in the run game, trying to keep my hands inside, trying to make sure I stand my ground in the run game,” Pitts said. “I didn’t talk to (the Dolphins) about scheme. No teams have mentioned to me about playing specifically receiver. I think a two-tight end (team scheme) will be difficult for a defense to guard.

“This (time) has been kind of different, because you dream of this your whole life and now you see it front of your eyes, to be able to enter the NFL as a top-10 pick. There’s not that many people who are fortunate enough to do that.”