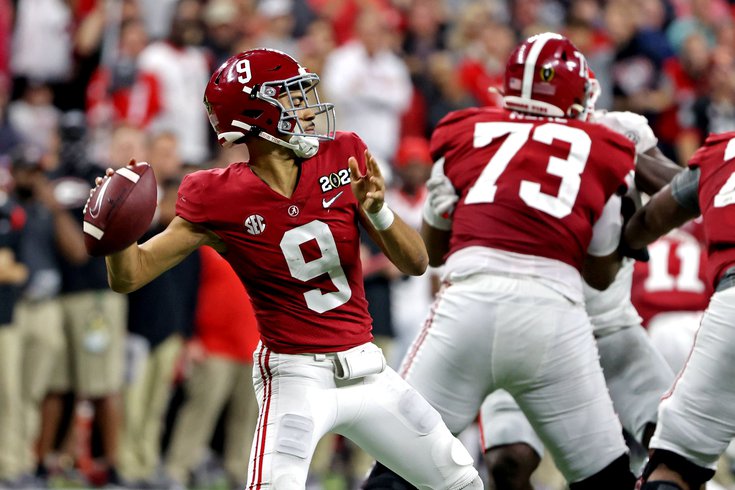 Nobody mocked Bryce Young to the Eagles, but more people will click if the picture is of him, and since we're selling out by publishing this crap in the first place we may as well get our money's worth.

Don't blame me for this. You clicked. As long as you're here, it's perhaps mildly interesting where some of these draft nerds think the Philadelphia Eagles (and New Orleans Saints) will finish in 2022, and you'll start to learn some 2023 prospects along the way, I guess.

Pick 16: Derick Hall, EDGE, Auburn: The Eagles have some notable expiring contracts at defensive end, a position the team always prioritizes. Hall emerged as a star for Auburn and has a chance to take another step in 2022 as he cements his status as a future high pick.

#JimmySays: The Eagles are about as likely to take a running back in Round 1 as they are a linebacker.

Pick 12: Eli Ricks, CB, Alabama: Another Alabama cornerback, but this time around, it’s a lot of projection. Eli Ricks transferred from LSU to the Crimson Tide and projects to start opposite Malachi Moore. Ricks is a long and rangy cornerback with a healthy recruiting background from his days in high school. He doesn’t allow much in coverage, amassing 5 career interceptions despite playing just a handful of games a season ago for the Tigers.

Pick 13 (Saints pick): Brandon Joseph, S Notre Dame: Back-to-back picks in the secondary for the Philadelphia Eagles in this NFL Mock Draft as they grab Brandon Joseph from Notre Dame. Similar to their first pick, Joseph’s selection is also a major projection at this time.

He thrives in zone coverage as a free-ranging safety, intercepting a national-best 6 passes in 2020. After he decided to return to college and spurn the 2022 NFL Draft, he transferred to Notre Dame, where he fits their system perfectly.

#JimmySays: I didn't know that Joseph had transferred from Northwestern to Notre Dame, so I guess I learned something here.

Pick 12 (from Saints): B.J. Ojulari, EDGE, LSU: The Eagles turned their big draft haul into a much smaller one with trades in 2022, leaving the need for a young explosive pass rusher on the table. This explosive player with a quick first step and a variety of moves would make sense. Ojulari is the brother of former Georgia star Azeez, a 2021 second-rounder who starts for the Giants.

Pick 13: Brandon Joseph, S, Notre Dame: The Eagles also couldn't tap into a need at safety after choosing not to give Notre Dame's Kyle Hamilton first-round consideration. Here they think about Hamilton's replacement. Joseph should build on his corner-like on-ball playmaking in his transfer from Northwestern, rebounding from a tough transitional year in his former program.

#JimmySays: Joseph again! We have an early leader in the clubhouse!

Pick 12: Nolan Smith, EDGE, Georgia: Anyone who watched this year’s NFL Draft prospects from Georgia knows what I’m talking about when I say that Nolan Smith is a very distracting dude. He made it very difficult to write notes on any of their prospects because Smith kept showing up on the tape. He’s heading up the depth chart and will be a future player this season. Honestly, in a few months, we might be talking about him in the Top 5 picks.

Pick 13 (from Saints): Myles Murphy, DL, Clemson: This feels low for a guy I think could end up going No. 1 when all is said and done. I don’t have rock solid proof on tape that he’s the best defensive end in the class or even on his own defensive line, but that tape could easily show up over the course of this college football season and the testing will follow. Here, he falls to an Eagles team that gets back-to-back picks and just massively upgraded their pass rush.

#JimmySays: Hey, Nolan Smith! I had him in my Eagles-only mock 1.0 before he decided to go back to Georgia.

Pick 10: B.J. Ojulari, EGDGE, LSU: Brandon Graham won't be around much longer, so the Eagles will need an edge rusher for the future. B.J. Ojulari did a great job of taking over for the injured Ali Gaye in 2021.

Pick 12 (no distinction given which pick is from the Saints): Malachi Moore, CB/S, Alabama: The Eagles miss the days that a perennial Pro Bowler like Brian Dawkins used to patrol the middle of the field. Malachi Moore is an instinctive defensive back who can play anywhere in the defensive backfield.