Eagles 53-man roster projection after the first week of camp 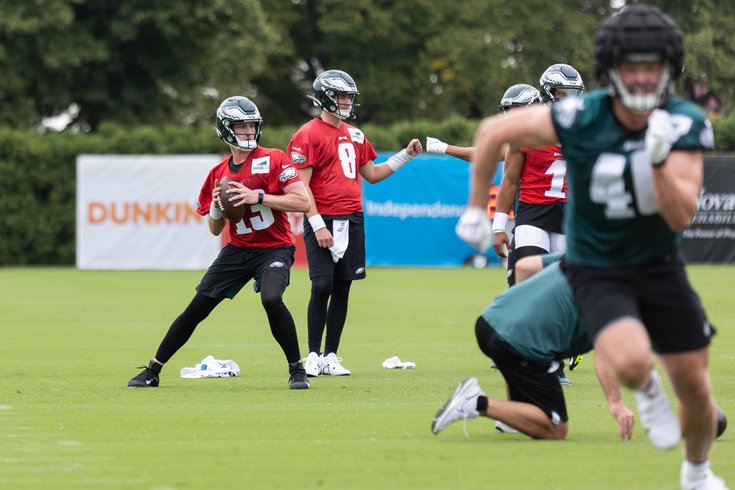 The first five practices are in the books at Philadelphia Eagles training camp, and they'll hold five more before moving onto joint practices and preseason games. In other words, we're sort of at the midpoint of the "Eagles practicing against themselves" portion of camp, if that makes any sense.

And so, let's go ahead and update our 53-man roster projections.

Hurts and Minshew are obvious, but Reid Sinnett? Maybe. After Miami waived Sinnett in October last season, the Eagles claimed him and proceeded to carry him on the 53-man roster the rest of the season. And there's a reason why — he's not bad!

In practice, Sinnett has shown decent enough arm strength, and he's been accurate. In the Dolphins' third and final preseason game last year, Sinnett went 22 of 33 for 343 yards, 2 TDs, and 1 INT. You can find highlights from that game here.

We'll see soon enough how Sinnett looks in the Eagles' preseason games, but for now I have him on as the #NextNateSudfeld.

In case you missed our "stock up - stock down" article yesterday, Carson Strong doesn't quite appear ready yet.

Would it be weird for the most run-heavy team in the NFL a year ago to head into the season with just three running backs, especially when the top guy has had his share of injuries? Yes, perhaps, though they could still add a big back to round out the rotation.

I reluctantly leave Jason Huntley off the initial 53 even though he is probably the best kick returner on the team. If he's going to make the roster, he'll have to show that he can contribute in the regular offense. He'll need a standout performance or two in the preseason games to punch his ticket, in my opinion.

There hasn't been a standout receiver who has consistently made plays so far aside from the top five here. If the team wants to keep an additional slot receiver, Greg Ward and Britain Covey are the biggest contenders for that role.

Calcaterra had a strong start to camp as a receiver before he was sidelined with a hamstring injury. He's going to make the team. Stoll has been quiet (he's more of a blocker than a receiver), but he should be back as well.

The Eagles have extreme depth along their offensive line. I would say that the top nine players above are locks, with Anderson on the bubble, fighting it out with Kayode Awosika and Le'Raven Clark.

Anderson has center-guard versatility, and he looked like a playable player at both spots in the Eagles' meaningless Week 18 game against the Cowboys last season. I would call him the favorite if the Eagles keep 10 linemen.

Clark is a veteran with guard-tackle versatility. If the Eagles were to cut him, he would not be subject to waivers and could choose to return after Week 1 (with a non-guaranteed salary) if the Eagles can work out such an arrangement with him (see Najee Goode as the recurring example of this in past years).

The team is trying to develop Awosika as a guard-tackle bench guy, and in my opinion, he looked good in camp a year ago as an undrafted rookie free agent. This year, he seems to be improving as a guard, but he has a ways to go at tackle. However, while I didn't review his play specifically in the Eagles' Week 18 game last year, he did enter my peripheral vision while watching Dillard, Anderson, and Clark, and it looked like he struggled in that game. I think he could use another year of development on the practice squad.

I should note that I have a bet with Bo Wulf of The Athletic surrounding Awosika's inclusion on the Eagles' initial 53-man roster. If he doesn't make the team, Bo owes me one sandwich from Pastificio Deli in the same shopping center as Chickie's and Pete's near the stadium. If Awosika makes the initial 53, I owe Bo seven Pastificio sandwiches.

While I don't want to root against a polite young player working hard to make the team, I also don't want to have to get Bo seven sandwiches.

This group feels rather cut and dried, but here's where I'll note that undrafted rookie free agent Ali Fayad has flashed at times. He's a strong practice squad candidate.

Tuipulotu was a controversial name on our last 53-man roster projection. He had a meh camp and bad showing in the preseason games a year ago, and he made the team anyway. This year he has played much better so far, and while the team is deep at DT, Tuipulotu can be a solid backup nose tackle. If anyone is looking to put sandwiches on that one, I'm all ears.

To make room for Sinnett above, I had to make a tough decision somewhere, and that was Patrick Johnson, who has struggled to get anything going as a pass rusher so far this summer.

This is the deepest the Eagles have been at linebacker in a long time. Edwards, White, Taylor and Bradley have all made plays so far this camp, and once Dean starts to find his sea legs I think he'll be fine.

Six feels like the magic number at cornerback this season. Slay, Bradberry, and Maddox are locks, with McPhearson not far behind, even if he has given up a bunch of deep balls this camp. The final two are tough choices at this point. I think the team likes Gowan's size and will view him as the player with the most long-term upside, while Vincent has some inside-outside (and maybe some safety?) versatility.

In my opinion, the four above players are ahead of K'Von Wallace, and a fifth, undrafted rookie Reed Blankenship, has looked comfortable from the jump on the back end of the defense.

The Eagles have barely had Siposs punt at all so far, which is curious.