Eagles activate five players off of injured reserve, and some other roster moves 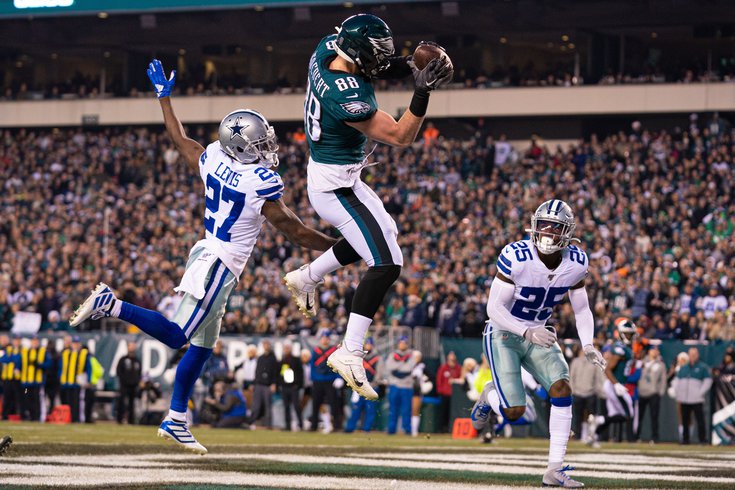 The Philadelphia Eagles are getting some reinforcements for their Week 8 matchup against the Dallas Cowboys, as the team announced on Saturday that they have activated five players off of injured reserve.

They are as follows:

• TE Dallas Goedert: Goedert fractured his ankle against the Bengals Week 3, and has been out since. In his absence, Zach Ertz was unproductive before landing on IR himself with an ankle injury, and the Eagles have been forced to give the lion's share of snaps at tight end to Richard Rodgers. While Rodgers had a good game against the Giants Week 7, Goedert would be a huge upgrade for the Eagles' offense, both in the passing game, and as a blocker.

• WR Jalen Reagor: Reagor will provide the Eagles' offense with some playmaking ability, as he returned slightly earlier than anticipated from a UCL tear that he suffered against the Rams Week 2. Sunday will be our first opportunity to see what a pairing of Reagor and Travis Fulgham looks like at wide receiver.

• LB T.J. Edwards: Edwards will be a welcomed addition back to the defensive lineup, as he has become the team's best linebacker. Edwards has been excellent against the run in his young NFL career, and the timing of his return lines up nicely against a Cowboys offense that is almost certain to try to lean on the ground game with Ezekiel Elliott, with third string rookie Ben DiNucci forced to start at quarterback.

• OL Jason Peters: It would appear that the Eagles are poised to start Peters over Jordan Mailata at LT, despite Mailata having clearly played better than Peters so far this season. As such, there's an argument to be made that Peters is subtraction by addition.

• S Rudy Ford: With Craig James out, the Eagles could use Ford back in his special teams only role.

• LB Nate Gerry: Gerry has not exactly been a fan favorite this season, as tight ends have eaten him up in the passing game, and lanes have been open in the run game. Gerry was playing every snap each game, so it will be interesting to see who the new three-down linebacker will be in his absence.

• DE Genard Avery: Avery had a nice game against the Niners (that was perhaps a bit overstated), but he wasn't playing much after the return of Vinny Curry from a hamstring injury.

• TE Hakeem Butler: Butler's lone snap in the regular offense in the NFL was the failed fade pattern on 4th and Goal from the 4.

• DT Raequan Williams: Williams will be the fourth DT with Ridgeway out.