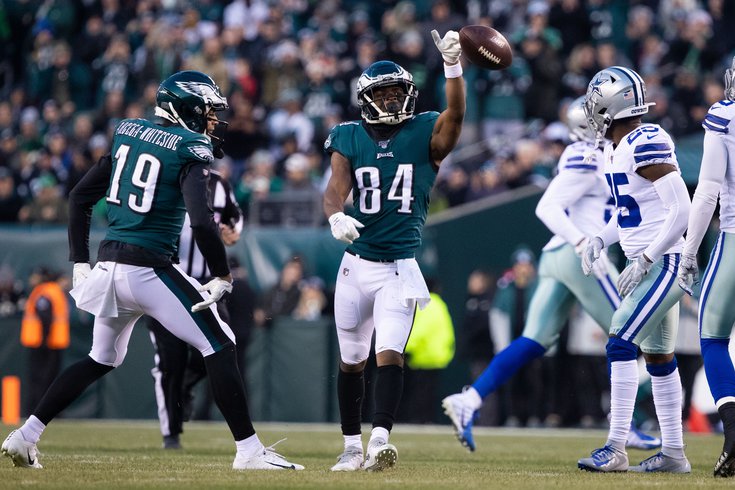 It feels different this year. Despite Sunday night's matchup between the Eagles and Cowboys coming with first place in the NFC East on the line, it feels as though Dallas Week just doesn't have the same juice as it used to.

Although perhaps that's somewhat to be expected, as the division title they'll be playing for is the equivalent of a participation trophy, with any real ideas of contending likely out the window at this point as loses and injuries continue to mount for both teams.

Or perhaps it's just that in 2020 — not to mention less than a week before a highly contested election — people just have more important things to worry about.

Either way, the Eagles will be back on the field on Sunday night for their second consecutive home primetime matchup against an NFC East rival — it appears the NFL schedule-makers were not prepared for the division to be this bad. And for the second straight week, first place is on the line.

Whether you're counting down the hours until kickoff or simply hoping it can provide a temporary distraction between the regularly-scheduled block of campaign commercials you've already seen a thousand times, odds are you'll be tuning in to this week's SNF matchup at The Linc. Even if you can't even name the Cowboys' starting quarterback.

So how do our writers see this primetime matchup playing out? Let's take a look with our weekly predictions...

This line opened at 6.5 points, is up to 7.5, and I suspect it'll jump even higher once Andy Dalton is ruled out and the Cowboys have to start Ben DiNucci. Get your bets in before that happens, because this Cowboys team is straight garbage. [Editor's note: The spread is already up to 9, and could be even higher by the time you're reading this.]

If the Eagles can't smoke this train wreck of a team, then what are we even doing?

It seems like every time I write one of these, there are a handful, handful and a half of players whose statuses are up in the air with just days to go before kickoff. Will Lane Johnson play Sunday? Will Jalen Reagor make his return? Will Dallas Goedert?

With most other NFL opponents, my prediction for this game would be determined in large part by which offensive contributors Carson Wentz will be able to rely on in the upcoming match up. But with this particular opponent, the putridly horrible Cowboys, it really doesn’t matter. In fact, if I were the Eagles, I would probably lean toward holding back some of these injured players with the bye week ahead so they can return with a healthy and replenished team for Week 10. Why risk it against a third-string quarterback no one has ever heard of in Ben DiNucci?

The Eagles’ injury-depleted roster is still good enough to decimate the Cowboys, and the Birds should enter their bye sitting pretty in first place in the NFC East.

I'm trying to not overthink this one too much. With the Cowboys on their third-string QB — assuming Andy Dalton isn't cleared to play and they're forced to roll with Ben DiNucci — it suddenly becomes a much easier pick to make. Had Dalton been healthy all week, there would have to be some concern about the Eagles chances in this one. But that's no longer the case.

The Eagles offense, which could be getting some reinforcements this week, shouldn't have any trouble scoring against what has been one of the worst defenses in football. And the Cowboys already appear to be in tank mode, trading away and releasing veterans, despite the fact that a win on Sunday would put them back in first place in the NFC East. With poor play on the field bleeding over into the locker room, they appear to be the true definition of a dumpster fire — and that's saying something considering the division in which they play.

My only pseudo-concern here is over the Cowboys' skill players. The Eagles defense has been solid up front, but there have been more than a few issues on the backend. And the prospect of guys like Amari Cooper and Ceedee Lamb running free in the secondary is always a worry. That's the only reason I see this game being slightly closer than some of my colleagues, but it should still be a comfortable win for the Eagles. (Is there any such thing as a comfortable win for this team?)

I continue to have little confidence in this Eagles team — they needed every bit of 60 minutes to take down a dreadful Giants team — but there are reasons for hope. Travis Fulgham has emerged as a legitimate weapon at wide receiver, and with Jalen Reagor looking like he could suit up, the Eagles may suddenly have a nice three-man group of Fulgham-Reagor-Ward to make life easier on Carson Wentz. The QB certainly deserves a bit of credit for Philadelphia’s late comeback last week, too, shrugging off some mid-game struggles to earn a win in the end.

I’m less enthused by the defense, but this Cowboys offense is running out of options and answers with all the injuries throughout the unit. Give me the Birds.

I saw and covered Ben DiNucci at Pine-Richland in high school and the young man I remember was a tenacious, highly intelligent, fearless competitor who never gave up. He beat a loaded St. Joseph's Prep team by firing back again and again in the PIAA state championship. I think those traits have only strengthened through time. What is also fact is that regardless how intelligent and how competitive DiNucci is, there is no crash course in preparing for NFL speed, than facing NFL teams. DiNucci, right now, has not logged the time.

This is an easy Eagles' victory, making them the best of a very bad NFC East situation. But the Cowboys will and should be a different team the next time the Eagles face Dallas, in Dallas, late in December. There's no reason this game shouldn't be an Eagles' blowout. Maybe I just placed the "Joe Jinx" on the Birds. Now watch the Eagles turn the ball over six times and lose 34-10

MORE: Eytan Shander: Eagles might be bad, but this team is full of guys worth rooting for

Dallas week… eh. I always thought it was a little overblown since nobody in Dallas has "Philly Week." At this point I’ll take any form of life in either the fanbase or the team. The Cowboys are awful, but so are the Eagles. Philadelphia is in no position to cover a 9.5-point spread, but they can beat Dallas.

I like the Eagles to win this game, 27-20. They will start slow – as they normally do – and the Cowboys will play the hardest they have all season. They have talent on the offensive side of the ball to get a score, add an Eagles turnover and you have a tighter game.

It might be "Cowboys Week," it might be "Sunday Night Football," but it's also Halloween weekend and the latest incarnation of one of the NFL's most heated rivalries shapes up as more of a dress-up.

The Dallas Cowboys were supposed to be the frontrunners in a bad division with a new accomplished head coach in Mike McCarthy (that's the Super Bowl-winning former Green Bay mentor not famed super agent Mike McCartney for those of you on Twitter), a superstar quarterback ready to cash in with Dak Prescott, an All-Pro level running back in Ezekiel Elliott, the most dangerous receiving corps in the league, and the perennial strength of a top-10 offensive line.

Add in a representative defensive led by DeMarcus Lawrence up front and widely athletic linebackers like Jaylon Smith and Leighton Vander Esch and some had Dallas as a legitimate Super Bowl contender.

Seven weeks in, after losing the QB for the season, going through an Eagles' level of attrition on the offensive line, watching the RB turn into a turnover machine, and understanding that the only thing new defensive coordinator Mike Nolan can stop is Zoom calls, Jerry Jones turned the mighty Cowboys into sellers in advance of the Nov. 3 trade deadline, sending veteran edge rusher Everson Griffen to Detroit and releasing overweight defensive tackle Dontari Poe and Philly native Daryl Worley, after there were no clearance-aisle shoppers for them.

The hits kept on coming when Andy Dalton was concussed last week during an ugly loss at Washington leaving rookie seventh-round pick Ben DiNucci as likely to start for the Cowboys at Lincoln Financial Field, seemingly rendering the one true strength left of Amari Cooper, Michael Gallup, and CeeDee Lamb at receiver somewhat nullified with no expected consistency from the vehicle that needs to get them the football.

Meanwhile, the Eagles are finally getting healthier with rookie receiver Jalen Reagor, left tackle Jason Peters, Mike linebacker T.J. Edwards and special teams stalwart Rudy Ford seemingly ready to return. Tight end Dallas Goedert also might be added to that list and even though right tackle Lane Johnson is still iffy and running back Miles Sanders is less than that, the net gain there is significant.

Eagles roll in this one.