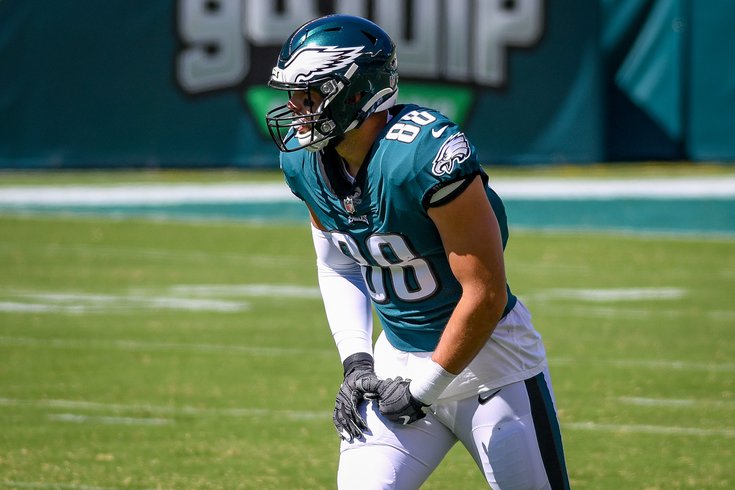 The Philadelphia Eagles announced on Wednesday (and Tuesday, and Monday) that they made a few roster moves, most notably activating a three-week practice window for the return of tight end Dallas Goedert off of IR. So let's do some catching up on that stuff.

The Eagles activated a 21-day practice window for Goedert, who is currently on injured reserve with a broken ankle suffered early in the game Week 3 against the Cincinnati Bengals. Goedert was off to a good start in 2020, catching 12 passes on 17 targets for 131 yards and a TD the first two games of the season.

His return to the lineup would be a huge boost to an Eagles offense that is also missing Zach Ertz. There's a legitimate argument to be made that Goedert is already better than Ertz at this stage in the two players' careers. Certainly, Goedert has looked better than Ertz in 2020.

If Goedert is able to return in time for the Eagles' matchup against the Cowboys on Sunday, it's worth noting that Goedert had a big day against Dallas in the Eagles' crucial Week 16 game last season, when he caught 9 passes for 91 yards and a TD while Ertz was out.

The Eagles placed Jackson on IR after breaking his ankle on a cheap shot by Giants safety Madre Harper.

Actually, there were two dirty hits on that play. The first was the helmet-to-helmet shot by CB Corey Ballentine, which was penalized, followed by the egregiously late hit by Harper, which was not. To be determined if the latter cheap shot will result in a fine.

At this point, there probably weren't realistic expectations that Jackson was going to stay healthy, but it's a bummer to see him go down in that manner. Jackson could have a chance to return before the end of the season, but he is expected to miss around two months.

Ridgeway went on IR with a biceps injury. Because the Eagles were (previously) fortunate not to see any of their top three DTs miss any substantial time through the first six games, Ridgeway didn't get a a ton of snaps, but he was productive when he was on the field. Ridgeway had 11 tackles (2 for loss) and a sack on 137 snaps this year. His season is over.

That's an untimely injury, given that Malik Jackson is currently trying to come back from a quad injury.

Reagor, Peters, Edwards and Ford all had their 21-day practice windows activated, like Goedert above. We covered those guys on Monday.