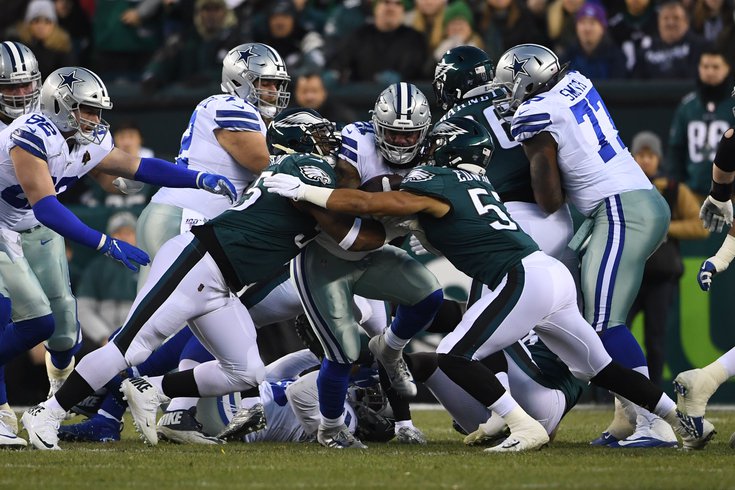 The Eagles' defense must shut down Ezekiel Elliott and make either Andy Dalton or Ben DiNucci beat them through the air.

The Dallas Cowboys and Philadelphia Eagles entered the season in something of a two-horse race for the NFC East, with Super Bowl aspirations. Seven weeks in, the Eagles are atop the division (lol) at 2-4-1, while the Cowboys are a half game behind at 2-5.

The Eagles have been bad, but the Cowboys have been even worse, as they are currently dead last in the NFC with a point differential of -67. Here are our five matchups to watch for Sunday's game, one in which the Eagles enter as a 7.5-point favorite according to TheLines.com's consensus odds.

1) The Eagles' defensive line vs. the battered Cowboys' offensive line

It probably makes sense to start with a recap of the players the Cowboys are missing (or could be missing) along their offensive line:

• C Travis Frederick: Frederick has been the starting center for the Cowboys since they drafted him in the first round of the 2013 NFL Draft, racking up 96 starts along the way. He missed the entire 2018 season with a rare disease, but returned in 2019. In six years in the league, he had three All-Pro nods (one first-team, two second-team), and five Pro Bowl appearances. He retired this offseason, so he's not on the team (duh), but is certainly worth noting.

• RT La'el Collins: Collins started the season on short-term IR with a hip injury, but when his hip didn't progress as the Cowboys had hoped, Collins had surgery, ending his season. He was replaced in the starting lineup by undrafted rookie free agent Terence Steele.

• LT Tyron Smith: Smith has four All-Pro nods (two first-team, two second-team), and seven Pro Bowl appearances to his credit, and is widely regarded as one of the best offensive tackles in the NFL. He played in two games this season, but surgery on his neck ended his season.

• RG Zack Martin: Martin was concussed against the Cardinals Week 6, and missed the Cowboys' matchup against the Football Team Week 7. He is expected to be ready to play against the Eagles Week 8.

• C Joe Looney: Looney entered the season as the starting center in place of Frederick. He started the first four games, before spraining an MCL and landing on IR. He is eligible to come off of IR this week, and could be ready to play. However, even if Looney is good to go for Week 8, Mike McCarthy said that rookie Tyler Biadasz, Looney's replacement, will continue to start at center.

• OT Brandon Knight: Knight started four games in relief of Smith, but he had arthroscopic surgery on his knee, and he's now on IR.

Over the first seven weeks of the season, the Cowboys' offensive line has looked like this:

The Cowboys' expected Week 8 alignment is this:

To note, it's also possible that Martin could fill in at tackle, where he played in college. In that scenario, either Looney or McGovern would play RG.

In short, the Cowboys have had a similarly disastrous season along their offensive line as the Eagles on the injury front.

An undrafted rookie will have to face Brandon Graham. A rookie fourth round pick will have to deal with Fletcher Cox. Either a bad veteran (Erving) or a converted RG will have to block Derek Barnett and Josh Sweat.

Clearly, this is a matchup that overwhelmingly favors the Eagles, and they must take advantage.

2) The Eagles' run defense vs. the Cowboys' rushing attack

As you have seen this season, the Eagles have done a good job stopping opposing running backs, but they have given up a ton of big plays on the ground to quarterbacks, wide receivers, and tight ends.

Luckily for them in this matchup, the Cowboys don't use a whole lot of that misdirection stuff that the Eagles have seen plenty of this season, most notably against the Rams, 49ers, and Ravens. On the season, the Cowboys only have 6 rushing attempts with their wide receivers:

Instead, their power run game is led by Ezekiel Elliott, who looks like he is already on the downside of his career, after heavy usage in his first four seasons. Elliott is only in his fifth season and he's still only 25 years old, and yet, there are only six running backs currently on NFL rosters with more career touches than him. They are Frank Gore, LeSean McCoy, Adrian Peterson, Le'Veon Bell, Mark Ingram, and Todd Gurley.

Not to mention, he already has four fumbles this season. He's just not the same guy.

Of course, with the Cowboys missing Dak Prescott, they are going to want to lean on Elliott and the rushing attack. The Eagles will face either Andy Dalton or Ben DiNucci at quarterback this Sunday. DiNucci is probably preferable, but either way, neither quarterback has appeared capable of leading the offense in any way comparable to Prescott. First and foremost, the Eagles need to shut down the run, and force Dalton and/or DiNucci to beat them through the air.

In four games against the Eagles since he arrived in Dallas, Amari Cooper has 25 catches for 422 yards and 3 TDs. With the exception of the Eagles' Week 16 win over Dallas last season, the Eagles have struggled from keeping Cooper from shredding their defense.

They now have a cornerback in Darius Slay, who has shown that he can man up on Cooper. With Detroit last season, Slay (mostly) followed Cooper all day. With Slay in coverage, Cooper was targeted 6 times. He caught 2 passes for 33 yards. Here are those targets.

Unquestionably, the Eagles are better equipped to handle Cooper than they have been in the past.

Gallup is the outside receiver opposite Cooper, while Lamb has mostly operated out of the slot. Both are capable of making big plays.

More than anything, the Eagles cannot give up big plays in the passing game. In 2019, including the playoffs, they gave up 16 pass plays of 40+ yards, which led the NFL. This season, they've done a far better job limiting the deep ball, as they've only allowed 1 play of 40+ yards, which is tied for the fewest in the NFL.

Against a team with an offensive line as banged up as this, starting an ineffective backup quarterback, you absolutely cannot allow quick points. If they're going to score, make them prove they can drive the field without making a drive-killing mistake.

5) The Eagles' rushing attack vs. the Cowboys' awful run defense

Not be all old school football guy here, but the Eagles should run the ball, since the Cowboys haven't been able to stop the run all season long. The Cowboys' run defense rankings through 7 games:

It would help quite a bit if the Eagles have Miles Sanders this week, but even if they don't, they should run it anyway, considering the backs that the Cowboys have faced aren't exactly a who's who of RB legends.