Eytan Shander: Eagles might be bad, but this team is full of guys worth rooting for 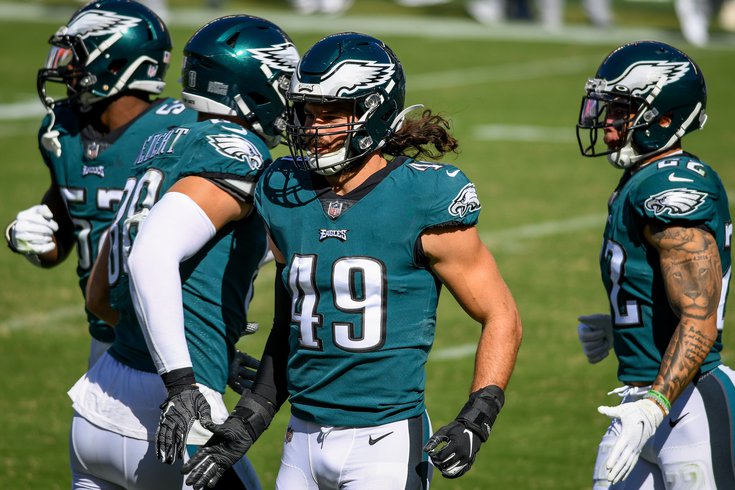 The Eagles are not a good team. They aren’t fun to watch. It’s been difficult this season to understand some of the coaching decisions, as well as some of the throws from the quarterback. This is not a typical season in a typical year with a typical sense of home field advantage. Nothing is truly normal about anything in our world right now, and the Eagles are no exception.

But that doesn’t tell the whole story, and it overlooks one of the best things happening in this city when it comes to sports. There are some really cool stories and fun guys to root for on this team. Winning six or seven games in an awful division shouldn’t take away the interest in rooting for some cool stories of people taking advantage of an opportunity, one they may not have had elsewhere or in a more "normal" year.

Travis Fulgham represents all of us who kept pushing for greater things but were simply held back because of who was on the “roster” at work. He knew the entire time in Detroit that lack of opportunity wasn’t because of his work ethic or skill set, it was simply a matter of roster politics. We’ve all been there, no matter the industry. We can root for ourselves in what we see in Fulgham, and I’m here for every single big catch he makes.

This young man has earned every single snap he gets, and if his count lowers as a result of bodies coming back, it’s a damn shame and awful reflection on the coaching staff. Fulgham is their top WR threat right now. That doesn’t mean that a rookie can’t step in — nor that they shouldn’t look to add to that position. It means that he earned the snaps and should be a staple in this offense moving forward.

Alex Singleton joined The Middle on Tuesday and instead of going off on what a fun guy he seems to be, I’d ask you simply watch the hit. He was full of energy and you can tell his motor never stops. Sure, he plays a position that’s been fully neglected by the front office, but you wouldn’t know it from watching him play. His energy stays the same on special teams, and you can truly feel how special playing in the NFL is to him.

Sacrifice. Hard work. Those buzz words you hear from middle management actually paid off for Alex. It’s a cool story to see someone bounce around and have success in Canada, only to return to the states and find success in our city. You can even hear in the clip how in tune he is with the fans here!

Then there’s Boston Scott, the little engine that could. Not brought in here to be the feature back, but simply taking advantage of the circumstances around him. Scott stepped up last year and truly helped that makeshift offense get to the playoffs. He is a small dude but filled to the brim with fight. He defines the “little guy” or underdog making it. And it was pretty cool to watch as Scott again took advantage of an empty backfield with Miles Sanders down with a knee injury.

If you’ve ever been told you are too small — or large, or old, or that something in your physical appearance is wrong for the job — then you can’t help but crack a smile for what Scott has done. It’s hard to ignore these guys all making something out of – as they were likely all told at one point – nothing. It’s also easy to miss these stories of growth and accomplishment during a miserable season in the middle (yes, middle) of a pandemic.

We still have Greg Ward, remember? The former QB who was plucked off the practice squad last year to play wideout, and did it well. He set the trend, opened the door if you will. Now, we have a bunch of good stories like the ones mentioned above — and we didn't even get to Jordan Mailata. The best part is they are all relatable in some way to your daily life. Think of how refreshing it is to root for guys who refuse to let up, instead of an alleged QB whistleblower or someone misquoting Hitler on their IG.

Each week I’ll provide one big bet I like for the upcoming Eagles game. It can be a simple line bet or a more specific prop. As always, all our odds come from TheLines.com.

Although I am pretty confident the Eagles can cover a 7.5-point line, I’d rather play the total here. Dallas is shot, and I don’t think they have anything planned to make life easier for whoever their quarterback will be on Sunday night. The plan to just hand Ezekiel Elliott the football won’t end well against the Eagles defense, mainly because at some point the Dallas QB will have to make a throw. I love the Birds D in controlling the tempo of this game. Yes, the Eagles will score a bunch of points, but Dallas will not. They simply can’t right now. Go with the under 43.5 and enjoy the win!