When will Jalen Reagor, Dallas Goedert, Miles Sanders and more be back? Does Jason Peters' return spell the end of Jordan Mailata? 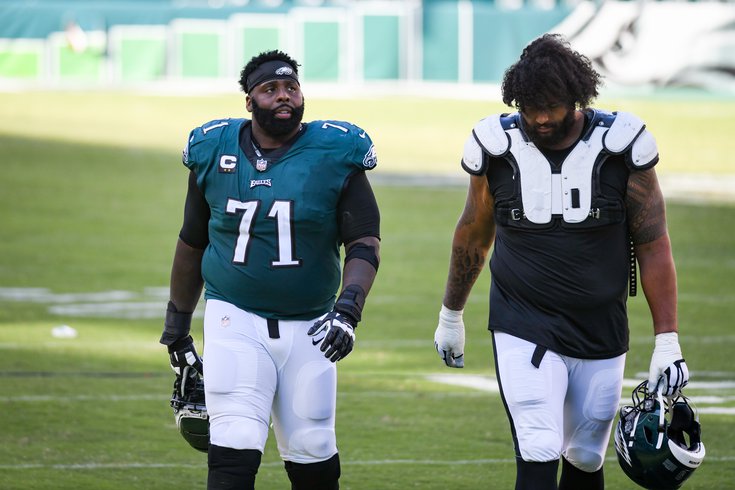 Jason Peters and Matt Pryor walk off the field after the Philadelphia Eagles loss to the Los Angeles Rams.

With the Dallas Cowboys apparently starting a fire sale in Dallas — they've parted ways with several veterans in the last two days alone — the Eagles could be on the cusp of getting some reinforcements. And we're not talking about potential trade deadline additions, either.

Heading into their primetime matchup against Dallas with first place in the NFC East on the line — a game in which the Eagles are currently 7.5-point favorites, according to TheLines.com — the Birds are hopeful that they'll get a few players back from injury.

"He's doing extremely well," Pederson said of Goedert. "I'm excited to get him back and sort of integrated into practice, even if it's on a limited basis, where he can at least start maybe catching passes from Carson [Wentz] and detailing some routes. We just got to see where he is each day and see where his comfort level is and how he responds with a little more of an intense, I guess, workout on his injury."

Goedert, who would be a big addition to the offense with Zach Ertz sidelined, was out on the practice field on Wednesday, as was Reagor, the Eagles first-round pick who suffered a thumb injury that forced him to go on IR. Whether or not either player is ready for the Cowboys will likely depend on how practice goes this week.

"Again, [Reagor's] another one we got to get him back into the offense and then just see where he's at," Pederson said. "But yeah, he's another one that will be out there today practicing."

While Jackson was the only one of those players to practice on Wednesday (and in a limited capacity, at that), the first three, according to Doug Pederson, are "day-to-day" and at least have a chance to play against Dallas. Alshon Jeffery, on the other hand, appears set to miss yet another game for the Eagles after a calf injury halted his potential return from foot surgery last season.

"Sometimes you see it with guys that have one injury and then they come back and something happens to another part of their body," Pederson said of the veteran wideout. "It is something that occurs, but when he's healthy, he'll be out there and ready to go."

The biggest injury-related news for the Eagles, at least in terms of analysis, might be along the offensive line. We already mentioned that Lane Johnson did not practice on Wednesday, although Pederson said it's hard to envision him not trying to play through both a lingering ankle issue and an MCL sprain in such an important game.

"I'll let you take that up with Lane because that guy doesn't want to come off the field," Pederson said. "You know he's tough. He's tough and still — I will mention this too with [T] Jack Driscoll, he's getting close and we're going to see where he's at again. We have to be smart obviously as a medical staff and as coaches to not put a player in harm's way.

"If the player feels comfortable — if Lane feels comfortable in playing and getting out there then listen, I'm not going to be the one that stands in his way. But it does give us some added firepower I think with the offensive line if somebody like Lane can go."

In addition to potentially getting Johnson back for Sunday's game, Jason Peters also returned to practice on Wednesday. But not at the position many had hoped.

Following a nice showing from Jordan Mailata in his time replacing Peters at left tackle, it appears the team is ready to go back to the 37-year-old veteran, rather than continuing to roll with the young kid to see if there's a chance he can be the team's left tackle of the future. With Johnson unable to practice, Mailata moved to right tackle and Peters lined up at his familiar position on the left side, according to reporters who were at the NovaCare complex.

Prior to practice, Pederson was asked about his plans along offensive line, and it sounded like Peters' return to LT was less of a shuffling as a result of Johnson's continued absence and more of a glimpse at how the team is planning to line up moving forward.

"First of all, Jordan [has] filled in nicely. He's done a great job, and I think that's a bright spot for us having seen him play and really play against some really good defensive ends or outside linebackers," the head coach said. "We all know that Jason Peters feels comfortable at left tackle and he's a veteran player and if that's where we want to play him this week, even if he's available to play. It's just something that I think too with Jordan, again, the reps, the time on task is just valuable and something he can learn from as he progresses and moves forward. So, it gives us a lot more depth now at the offensive line position, that's for sure."

But Mailata is a tackle, so if Peters is lining up on one side and Johnson the other, that doesn't leave much of an opportunity for your young prospect to develop. However, you could leave Mailata at LT and plug Peters back in right guard, where he worked out during training camp before you gave him a raise to move to the outside.

Maybe that is the plan, after all, and this was indeed a temporary move with Johnson out. But typically you practice at the position you're expecting to play in the next game. So either the team doesn't actually expect Johnson to come back, or they do, and Mailata is returning to a backup role.

But, hey, at least it's nice to be talking about the Eagles having options along the line, rather than worrying if they're even going to have five serviceable guys to line up.

Here's a look at the Eagles official injury report from Wednesday: