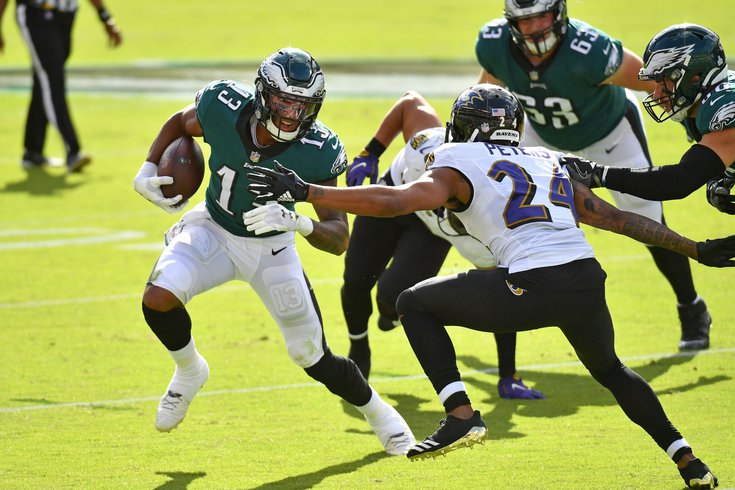 When smarts and competitiveness meet opportunity, you just might end up with Travis Fulgham, the unlikely Eagles' WR1 who didn’t even arrive in Philadelphia until Aug. 20.

Before that demarcation line, there was hope that DeSean Jackson would stay healthy, that Alshon Jeffery might get healthy, and that, perhaps, Jalen Reagor would offer an immediate impact as a first-round pick.

Many observers were even holding out hope that 2019 second-round selection J.J. Arcega-Whiteside might turn the corner in his second season or that slot receiver Greg Ward would continue an ascent that would turn him into another Julian Edelman.

None of that has happened, of course, but what did was the Eagles picking up the 6-foot-2, 215-pound Fulgham off waivers from Green Bay.

After nearly a month on the practice squad, the injuries continued to pile up for Philadelphia and Fulgham got that opportunity when the calendar turned toward October. His ascent started at San Francisco where the Old Dominion product, a sixth-round pick by Detroit in 2019, got his feet wet with his first two professional receptions, one of which was a game-winning 42-yard touchdown from Carson Wentz.

The big plays really came forward in Pittsburgh as Fulgham was the best WR in the NFL that week, according to ProFootballFocus.com, after hauling in 10 receptions for 152 yards and another score. The TD streak continued against Baltimore at Lincoln Financial Field as Fulgham snared six catches for 75 yards against the top cornerback duo in the league, Marlon Humphrey and Marcus Peters. Fulgham's first month as a contributor ended against the New York Giants in Week 7 with five more catches for 73 yards.

In four games Fulgham transitioned from emergency fill-in to legitimate WR1, at least on this team.

Fulgham was more of a basketball player for most of the high school before finding his calling and walking on at ODU, where he ultimately developed into the first offensive player in school history to be drafted into the NFL.

"You look at a guy who didn’t play football his whole life, he only played the latter part of his high school career and then kind of went as the walk-on deal over to ODU and ended up becoming a great player there and then gets drafted," Moorehead said. "Sometimes, you know, things happen within your time somewhere."

Everyone in the NFL can play, something defensive coordinator Jim Schwartz explained earlier this week.

"Anybody that makes an NFL team is good enough to play, so I think you start there," Schwartz explained. "That's going to get your respect right away. You're good enough to make a 53-man roster. That deserves our respect."

From there it's often about fit and an opportunity, which frankly never arrives for many players who don't have the pedigree that comes with the tag of a premium draft position attached. There are other hurdles that can emerge as well, something Moorehead, once an NFL WR himself for Peyton Manning in Indianapolis, explained.

"Maybe it’s you get comfortable, maybe it’s some things are going on in your personal life, maybe it’s you and the quarterback aren’t on the same page, maybe it’s you and the coaching staff that aren’t on the same page," Moorehead explained. "There are things that happen, and I can’t say that one thing or another has happened to Travis, but I know this, when he came here, there was a sense of comfort. Something about him, as soon as he got here, he started practicing, I don’t know if it was some weight off his shoulders, maybe he didn’t feel any pressure, but all of a sudden, the guy just starts making plays."

Those plays quickly transferred from the practice fields at the NovaCare Complex to the bright lights of game day.

"He keeps making plays, and you put him in the game and the same thing happens, and right now he’s playing really good football," Moorehead gushed. "I can’t attest to what happened in Detroit or Green Bay, but there seems to be a guy or two every year that this happens to."

Moorehead noted that personnel is never an exact science and miscues can happen at every step along the way. Think Adam Thielen, undrafted out of Minnesota State and not even invited to the combine, vs. Corey Coleman, Josh Doctson, or Laquon Treadwell, former first-round picks who have done virtually nothing in the NFL.

One thing helping Fulgham trend in that direction is his football IQ.

Doug Pederson often talks about starting receivers slowly in his offense and allowing them to learn the X position, or the Z. Even the slot before expanding roles. In Fulgham's case, he was thrown in the deep end against the 49ers, something few expected, and by the Pittsburgh game, Fulgham was lined up all over the field.

“It's definitely a shock,” Fulgham admitted when asked by PhillyVoice.com about his extensive role. “I didn't know it's gonna happen this fast but this is something I'm ready for.”

"Travis is a smart guy," Moorehead said. "He works really hard and he’s got a knack for making plays. I think that as he kind of got into our offense and started to learn our offense, the way we call it, he’s been fortunate enough where he’s been in a west coast offense before so he had some of the terminology was pretty much the same.

"That allowed a little bit of room for him to step in quicker."

The biggest part of Fulgham's success, however, was quickly earning Wentz's trust and he did that by fighting for every football that has come his way.

“I just feel like I'm a playmaker,” said Fulgham. “Whenever the ball in the air, just go ahead and make the play. Doesn't matter where the ball is, I have a big catch-radius. Doesn’t matter if it’s one hand or two hands, just come down with the ball.”