John McMullen: For contending Eagles, time is on their side 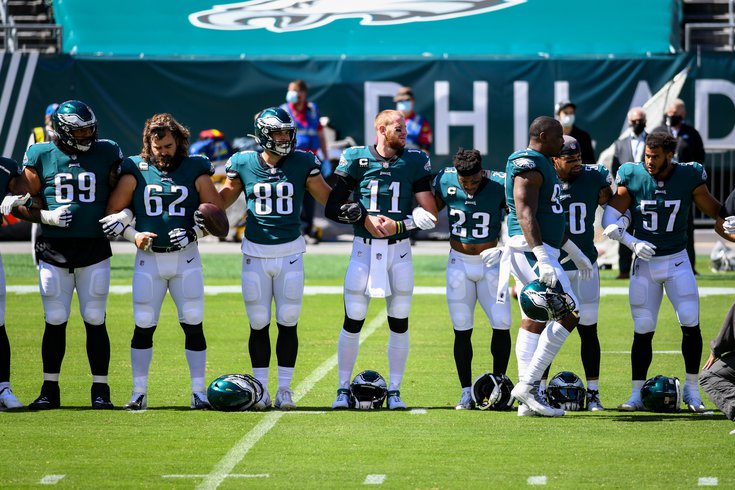 Teammates link arms in solidarity before the Philadelphia Eagles game against the LA Rams at Lincoln Financial Field in Philadelphia on September 20, 2020.

The whole Philadelphia Eagles' ecosystem is built on the theory that the more times you're in the mix, the more likely the stars will align.

That structure really started in 1999 with Andy Reid's arrival and finally played out nearly two decades later on a cold winter's night in Minneapolis with Big Red's acolyte, Doug Pederson.

In between, there were 10 postseason appearances and since Super Bowl LII, there have been two more. The constant churn of giving yourself the opportunity for pieces like Patrick Robinson, Chris Long, and LeGarrette Blount to complete a very difficult puzzle.

The odds are always against you. After all, for all the success of Bill Belichick and Tom Brady, the final game for New England was always more likely to be a loss than a win.

To say the rest of 2020 and into the next calendar year is going to produce another Lombardi Trophy seems beyond specious for Philadelphia but what the Eagles do have is the luxury of time when it comes to creating the opportunity for this group of puzzle pieces to align correctly again.

Much like Thursday night's win over the New York Giants, that sentiment has more to do with the others in the NFC East than the Eagles themselves but it exists nonetheless.

The NFC East is that bad especially now that Dallas is without Dak Prescott.

From a practical sense, a home playoff game at 10-6 is the same as one with a 6-9-1 record, the latter a path that this dismal division could provide as an option for Doug Pederson's fourth consecutive playoff berth.

That became even clearer Sunday when the Washington Football Team emerged as the Eagles' top contender by routing the Cowboys 25-3. To make matters worse for Dallas there is no guarantee veteran backup QB Andy Dalton will be through the concussion protocol in time for next Sunday's game at Lincoln Financial Field.

Dalton, the long-time starter in Cincinnati, took an ugly blow to the head from Jon Bostic after sliding in the third quarter Sunday, leading to the latter being ejected and Dalton being taken to the locker room and quickly ruled out.

Andy Dalton took a nasty hit to the head pic.twitter.com/Yg913OGotr

In case you're wondering if Dalton can't recover quickly enough next week the Cowboys would be down to rookie seventh-round pick Ben DiNucci and Garrett Gilbert against the Eagles. Not exactly Roger Staubach, Troy Aikman, or Tony Romo.

In theory, the WFT is now the Eagles top threat in the division because of its unlikely comeback win in Week 1 over the Eagles but Kyle Allen at the controls doesn't exactly foreshadow a ton of success over the final nine games of the season for Ron Rivera's team.

Take out the crystal ball and you’ll surely conjure up the Eagles as the team assuredly left standing after 17 weeks and who knows what happens from there.

Come January, maybe Jalen Reagor is back at receiver and looking more like Justin Jefferson. Perhaps, Isaac Seumalo and Jason Peters are back to calm down the offensive line deficiencies and open up holes for Miles Sanders. And maybe all of that plus the returns of Zach Ertz and Dallas Goedert at tight end opens up Rich Scangarello's supposed play-action tricks for Carson Wentz, who in turn stops turning the football over.

On the defensive side, the best projection is that the line keeps trucking and perhaps Jim Schwartz turns linebacker into a meritocracy while the defensive backfield stays healthy and consistent.

If you find any of that plausible, the Eagles are still losing in the postseason. If you find all of it plausible at once, download your favorite gambling app and take the odds right now before that Murder Hornet nest in Washington State starts migrating east.

The rumors are true - our entomologists located the first-ever #AsianGiantHornet nest in the U.S. late yesterday. Press conference at 2 p.m. pic.twitter.com/oXuE6urXff

That many stars aligning is obviously rare and likely isn't going to happen but the opportunity for it all to come together will be there in January.