Despite Eagles' loss to the Ravens, Wentz put the team on his back and was a two-point conversion away from a legendary performance 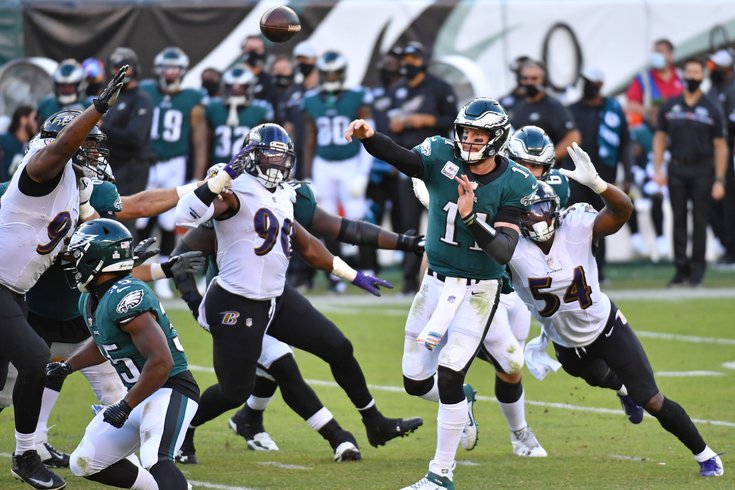 The numbers were actually pretty ugly but there was Carson Wentz, bruised and battered, still plugging away against one of the best teams in football.

After an afternoon of 6,000 fans-or-so secretly thinking about what life might be like with Jalen Hurts at the controls, the discourse was forced to do a 180.

Incredibly, a 31-14 deficit with just over seven minutes to go against the powerful Baltimore Ravens had turned into one play to tie it despite Wentz throwing to Jason Croom and Travis Fulgham, not Zach Ertz and DeSean Jackson.

Despite Jamon Brown and Brett Toth blocking for the QB1 instead of Brandon Brooks and Lane Johnson. Despite John Hightower and Miles Sanders dropping potential touchdowns. Despite head coach Doug Pederson getting the two-point play call in a little too late and speeding things up for the inexperienced offensive line.

Wentz somehow still gave the Eagles a chance by dragging a cast of players many of those 6,000 didn't even know.

This was a real-life Rocky Balboa getting knocked down again and again by the uber-talented Apollo Creed. In the end, however, just like the fictional pugilist, Wentz lost thanks to an ill-conceived RPO sniffed out by Baltimore's Matt Judon and LJ Fort, the ex-Eagle who’s better than any linebacker Jim Schwartz currently has.

“We probably did get a little later out of the huddle than we wanted," Wentz said when discussing what went wrong on the final opportunity to potentially extend things in what turned out to be a 30-28 setback. "I think it’s a 20-second play clock, seems like it goes pretty quick on a two-point play, and so we have to be more urgent to get up to the line and get our calls and get our checks. We had a scouted look there that we felt confident in. They made a good play, made life tough on us.

"It’s frustrating to come up short, but hats off to them.”

“We were bringing pressure there," Harbaugh said. "Both of those guys were right where they were supposed to be, and that’s why we had too many people for the gaps. They executed the defense very well. Of course [Judon] saw what he saw as far as the run play, I think they just executed the defense really soundly and made a great tackle."

Had Wentz finished the comeback and the Eagles won in overtime this was a game that would have been talked about for generations. Instead, it will become a footnote, at least to the people who weren't on the field with him.

“Carson doesn’t need to show me anything. I know who he is," All-Pro center Jason Kelce said. "I know who he has been since he has been here. He did an unbelievable job all year, really, of fighting through a lot of hits."

The opposition sideline was also aware of what went on.

"Credit the Eagles. Just a hard fight. It was a tough, hard fight. They came roaring back," Harbaugh said. "That's a really good football team. Give Carson Wentz a lot of credit. He played, just — he got hit and he kept coming back, making plays with his legs, hanging in there and making throws.

"I give Carson a lot of credit. I thought he led them."

The actual numbers for Wentz were just 21-of-40 for 213 yards and two touchdowns, along with 49 yards and another touchdown on the ground. They would've been much better if not for the dropped touchdowns, however, and if the offensive line wasn't Kelce and what Jeff Stoutland found in the utility drawer at the NovaCare Complex.

"The resiliency of this team is something that I don’t think you can question," Wentz explained. "And the toughness of these guys and I mean, you got injuries all over the board and you got guys stepping up that maybe just got here this week or all over the board. And that’s not an excuse, but there’s a lot of good that we can learn from and the fight and the effort is something that I’m so proud of."

By the end of 60 minutes of football, the Ravens' route down Darien Street heading for I-95 south felt like an escape, not a triumph.

The Eagles, meanwhile, might be the club fighter unworthy of a title shot, but they're getting a sequel in the form of a three-game stretch against woeful NFC East foes, hoping to turn a 1-4-1 start into a division title and a fourth consecutive postseason berth.

"These guys – to give us the chance to tie it up at the end of the game – obviously we came up short and we’re frustrated with that, but I’m proud of these guys and we’ll keep building with this," Wentz assured. "We have a quick week to turn it around and start going in the right direction.”

You can also listen to John during the week on @SIRIUSXM and every Tuesday and Thursday on "The Middle" with Eytan Shander, Harry Mayes and Barrett Brooks on @SportsMapRadio and streaming live at PhillyVoice.com/TheMiddle, and on dozens of radio station nationwide courtesy of @JAKIBMedia