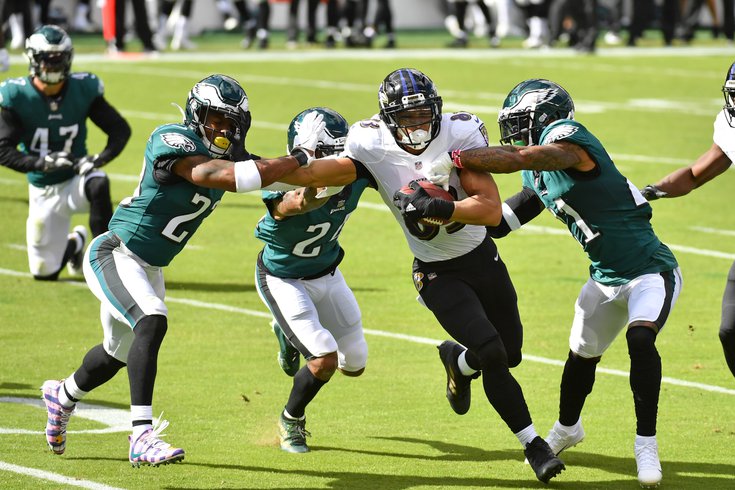 The Eagles are just not good enough this season to justify trading draft picks for new players.

A report was buzzing around before the Eagles kicked off their somewhat confidence inspiring 30-28 loss to the Ravens Sunday, suggesting that Howie Roseman was getting ready to wheel and deal, ahead of the trade deadline in about two weeks.

That's nothing new — Roseman has added a player in each of the last few mid-season marks with mixed results (like Genard Avery, Golden Tate and Jay Ajayi). What is new, is that the Eagles should not be buying at the trade deadline. At the most they should stand pat — but with a salary cap issue and a bevy of older players stuck on the ledger, selling is probably the smartest course of action.

Well for one, they're old. Selling serves two purposes and neither of them is tanking. The first is to get more draft picks, to help the Eagles get younger. The second is to open up starting roles for young players who may be blocked snap-wise by a veteran guy.

The Eagles could, theoretically (and, they probably will), use their near-epic comeback on Sunday, getting to a two-point conversion away from tying the Ravens after trailing by as many as 18 points as an excuse to buy before the November 3 trade deadline. But they are 1-4-1 now, and regardless of how much better certain facets of the team looked in Week 6, this is not a team that should be buying. The deep hole they dug themselves into was not helped by the injury bug biting once again, threatening Greg Ward, Zach Ertz, Miles Sanders, Jack Driscoll, K'Von Wallace and Jalen Mills with a short week coming up.

Yes, the Cowboys are missing Dak Prescott. Yes, Washington and New York are awful and the Eagles could, theoretically, win the rest of their division games and make the playoffs. But a trade, or even two or three at the deadline would not solve anything. And could negatively impact the team in the long-term.

On top of that, what are they going to be able to bring in that's going to suddenly turn this team around? There are issues all around, and on both sides of the ball, and a quick fix is not something that's going to available because, well, it doesn't exist.

Let's take a position by position look at why it makes no sense whatsoever for this team to swap draft picks for an upgrade anywhere on the roster:

The Eagles have suffered through dreadful quarterback play — a near unbelievable comeback Sunday notwithstanding. But there is no upgrade out there (and if they make a change, they'll "promote" from within with Jalen Hurts). Carson Wentz has turned over the ball 10 times, the most in football though six games. He has gotten almost no help from his offensive line and is scraping the bottom of the barrel with receiving options, but he still looks at times to be more than substantially worse than he was at the end of last season, even if he has improved in recent weeks.

Running back (17th in rushing yards)

Miles Sanders has been good when his number has been called, which is rarely. He is the only big playmaker currently on the roster — but is a constant injury risk. He left the Ravens loss with a new injury, the extent of which is currently unknown. The Eagles don't run the ball nearly enough and are getting almost nothing from backups Boston Scott and Corey Clement. A veteran running back would help, but how much?

The Eagles need help at wide receiver and will get it in the form of DeSean Jackson, Alshon Jeffery and Jalen Reagor. Once that trio is healthy, the Birds will have too many mouths to feed, with John Hightower, JJ Arcega-Whiteside, Greg Ward and Travis Fulgham also on the active roster. They won't be making a move for a WR.

Zach Ertz has a huge contract and Dallas Goedert isn't going anywhere. No tight end help is coming (though the production since Goedert's injury is awful). If anything, the Eagles would be smarter to move one of their tight ends, probably Ertz, before they both enter contract years in 2021.

Should the Eagles be interested in adding offensive line help? Yes. Without a doubt. Their line is decimated by injuries and has a single projected offensive starter left in Jason Kelce. The problem is, they pretty much need three or four players to help reinforce the offensive line, and have massive contract commitments to injured veterans Jason Kelce, Lane Johnson and Brandon Brooks — the first two of whom should be healthy at some point. They also should get Jason Peters back from injury later in the season as well.

The defensive line has been good, and relatively healthy. Knock on wood.

The Eagles linebackers have been one of their biggest problems on offense, and they could use help here. Roseman is reportedly looking for a linebacker on the trade market. But is it worth giving up draft picks for what could amount to a short-term rental in a season where seriously contending seems out of the question? Or would it be smarter to let your young players like Davion Taylor and Shaun Bradley get some experience, even if they aren't quite ready yet?

The Eagles' secondary has been half-decent and has stayed healthy, but they do have an issue keeping a safety on the field alongside Rodney McLeod. Will Parks is now healthy and returned against Baltimore. They also are not particularly ball hawks.

The Eagles have seven picks in the 2021 NFL Draft. Chances are, with their record toward the bottom of the standings, they'll get a pretty good pick. Trading away portions of their draft stockpile in order to chase an empty division title in a weak NFC East would have horrible consequences in years ahead — particularly after the front office has swung and missed so badly in recent years.

So to recap, the Eagles would need to give up what are theoretically good draft picks — ones they need badly to get younger and "rebuild" to fill holes at a ton of positions — in order to get a few band-aids so they can win seven games and the NFC East (and lose in the first round probably). The worst case scenario could play out, as the Eagles are slated to host the Giants Thursday night in Week 7, and then have nine days off before facing the Cowboys for what could be first place in the division. The trade deadline will be two days after that fateful game.

Roseman, Doug Pederson and the rest of the Eagles decision-makers want to think they're just a trade piece and some injury returns away from contention. But they have to decide if contending for an empty division title is really worth depleting draft pick reserves, keeping young players off the field (from potentially developing) and finding a way to move on from their numerous over-30 former stars.

Heading into Sunday's game against Baltimore, Philly had insanely long +6000 (18th best) Super Bowl odds, according to TheLines.com's consensus odds. Do you want a team like that to be buyers before Week 8's deadline?