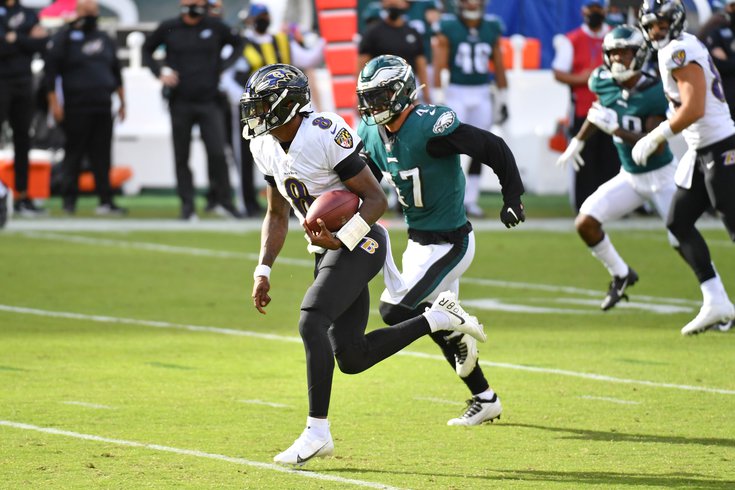 The Eagles were fortunate to get a substandard performance from the Ravens on Sunday, but it says a lot about Philadelphia that they only threatened the Ravens in the game's final minutes. Baltimore's 30-28 win featured some late heroics from Carson Wentz and a good fight from the group, but a loss is a loss.

• On a day where the Eagles had so many things go wrong, the defensive line deserves a round of applause for keeping this from being an absolute ass-kicking. When they weren't tasked with defending a short field, they were excellent pretty much all day and all over the line. Josh Sweat continued his breakout season, Malik Jackson created pressure through the middle, Fletcher Cox got his hands on some Lamar Jackson throws, each piece of the line appeared to do their part to make things tough on Baltimore.

Sweat is the guy who probably deserves the biggest spotlight for his play, if for no other reason than it being a rare sign of development on a team that continues to whiff in the draft. The physical traits and flashes of production we've seen in small doses are being realized in much more consistent fashion, forcing Jim Schwartz to keep him on the field early and often.

• Well, that's one way to score the first touchdown of your season, JJ Arcega-Whiteside. JJAW's one redeeming quality this season has been his downfield blocking, something he flashed during Miles Sanders' long touchdown run against Pittsburgh, put him in position to scoop and score on another long Sanders run in the third quarter Sunday.

There's a lot to like in this play. Jalen Hurts' motion to start the play sucks in some Baltimore attention, opening a gap for Sanders to attack early. Sanders' speed and acceleration allows him to get to the second level, and he comes very close to producing another monster touchdown run, with the near turnover the only blemish. And then JJAW ends up getting into the endzone because he doesn't quit on the play, pouncing on the football almost immediately after it squirts out of Sanders' arms.

It doesn't have the same feeling as a pure Sanders run into the end zone, but six points are six points.

• I admit this one is mostly on me, but my reaction to Jason Croom scoring a touchdown Sunday afternoon was, "Who?" Given how many other people reacted the same way, I think I get at least a slight pass.

The practice squad call-up didn't have to do much work on this one, but good for him.

• Wentz got absolutely pummeled for four quarters on Sunday, and to his tremendous credit, he kept picking himself back off the turf, standing in the pocket, and giving his guys opportunities to make plays. Down by 16 points with time winding down, he rolled down the sideline and refused to go down on a long QB keeper, willing himself and his team into a position to score late in the game.

After narrowly dodging an interception earlier in the drive, Wentz would eventually come up with a touchdown throw to Travis Fulgham. Talk about a great story with that guy, by the way — he continues to come down with tough catches in big spots for his new QB:

These games are easy to fold in as a quarterback. We have seen careers altered when QBs sit back and get crushed in the pocket over and over again, not necessarily due to injury but because of how your confidence changes when you never know if you'll have enough time to throw. Wentz is a stubborn, tough SOB though, and the Eagles needed that mentality to make it interesting in the closing minutes.

Even with things crumbling around him, Wentz has looked considerably better in recent weeks. That's a great sign.

• Fulgham is a damn player, man. After Baltimore kept him in check for most of the first half, Fulgham came alive in the final 30 minutes of this game.

It is pretty incredible how much of a difference-maker he has been — Wentz suddenly has a guy who is putting pressure on defenses in just about every area of the field. He's comfortable going over the middle, he has adequately worked the sidelines, and as we saw late in the game, Wentz trusts him to go up and beat people one-on-one down the field. Apart from the touchdown in the fourth quarter, Fulgham very nearly came down with a difficult grab on a desperation heave from Wentz at the end of the first half, foiled only by a good breakup from Baltimore.

Don't care who you upset or have to keep on ice if/when everyone is healthy, he should be a fixture for this offense the rest of the way.

• What was Doug Pederson thinking when he went for two points on the Eagles' opening touchdown of the game?

That point ended up looming large. Philadelphia had to try to convert for a two-point conversion on their final drive of the game, and they got stuffed in the backfield to end the comeback threat. You can quibble with the play-call on that play and criticize them for a ton of other decisions that led up to the loss, but at least some of those issues are justifiable.

It's part of a season-long theme where Pederson's sense of aggression doesn't seem tied to the game situation, just some misguided general idea that he wants to play aggressive. I'm on board for punting less and playing aggressively between the 20s, not so much on the extra-point try when there's not a solid math argument to do it.

• All that praise for the defensive line up top just for them to get absolutely fried up the middle on this touchdown run for Jackson:

That being said, Nate Gerry was completely out to lunch on this play, which is something you could say about Nate Gerry on at least 50 percent of the snaps he plays. Who is he tracking around that side of the line? Why is he not filling a gap? What could he be hoping to accomplish?
Philadelphia's complete lack of investment at the linebacker position has killed them this season. They have had solid stretches in the secondary, the defensive line has come alive in recent weeks, and they still get gashed on plays like this. One group isn't carrying its weight.

• Outside of Gerry, who has the distinction of being a season-long headache, no one had a more miserable day at the office than Jamon Brown. Filling in for Matt Pryor at right guard, Brown looked like a guy who had never seen an NFL field before. I regret to inform you he has played 60 career games prior to this season, so I can't say I'm optimistic about him turning into a productive guard before the season is over.

Calias Campbell dominated the Eagles so thoroughly on that side of the line that it completely warped Philadelphia's protection all game. Wentz was running for his life for most of the game, and even that is a generous description of what the quarterback had to work with. There were many possessions where he never had a chance to run or throw the ball at all, with Baltimore in his face before he had even completed his dropback and assessment of the field.

Brown's day was so bad that it led directly to a lower-body injury for right tackle Jack Driscoll, whose legs got taken out after Brown got absolutely torched in pass protection to his immediate left. He stunk in every way it is possible to stink.

There's not a QB in the NFL who could win with the sort of protection and lack of receiving talent on display Sunday. I don't think the line has been a viable excuse for Wentz's play most of this season, but this game was an absolute disaster in the trenches.

• A smaller complaint compared to the more glaring issues, but Philadelphia's special teams unit feels more pedestrian than I can remember them being in a while. No explosive threats in the return game, Jake Elliott has been worse than in years past, they just aren't creating much value for a team that really needs some wins along the margins.

• I simply do not need to see any more of Gerry. Not in pass coverage, not trying to bring a runner down in the open field, especially not looking at the back of someone's jersey as they break off a big play. No mas.

• The Eagles have enough problems without letting teams get away with several blatant penalties in a row. No idea what the officials were looking at early in the fourth quarter, when Hightower basically got tackled on a throw that could have been a potential touchdown.

• Zach Ertz is having a brutal season, one where it feels like his chemistry with Wentz is crumbling and his future with the team is more uncertain than it has ever been. There are plays and catches to be made by Ertz that he's leaving on the table due to what looks to be from a lack of effort or focus. It is a huge and unfortunate development.

Things got even worse for Ertz on Sunday when he picked up a knock in the second half that continued to bother him the rest of the game. Given the issues he is already having, anything that impacts his ability to separate threatens to make a bad season even worse, and in a worst-case scenario, could remove one of the only healthy starters they have remaining from the lineup. Watching him walk slowly down the tunnel midway through the fourth quarter felt like the capper on another tough day.

With Sanders ruled out with a knee issue during the second half, things just continue to go wrong for Philadelphia this season. Is it the lack of preseason, the training staff, a run of bad luck? Most likely a combination of all of those things. In any case, this has all the makings of a disaster season, and any thought that they should be buyers ahead of the trade deadline is outrageous.