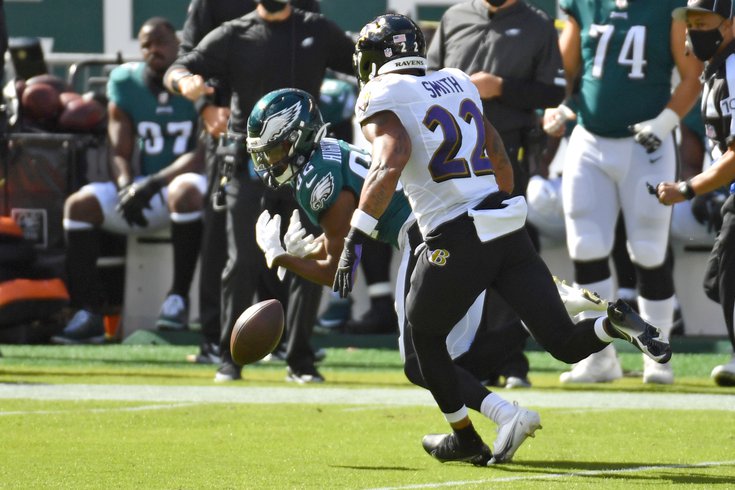 The Eagles offense continued to struggle behind a depleted offensive line, allowing a Ravens team not playing their best football to amass a 17-0 lead at halftime. Short fields spelled doom for Philadelphia in the first 30 minutes of football.

• The shame of how bad the Eagles were everywhere else is that I thought the defensive line actually played pretty well in the first half. Josh Sweat's breakout season continued on Sunday, with the third-year lineman bursting around the edges and forcing Lamar Jackson into some tough throws that he botched. Their defense of the run was also pretty solid, considering how tough it can be to deal with an option attack spearheaded by Jackson, one of the league's unique talents at quarterback.

• Jalen Hurts coming in and immediately providing the most positive play of the half on offense has to feel pretty bad for just about everyone involved with that unit. Getting a second first down on his second play from scrimmage was great to see from the kid, who looks as dangerous as a runner at the NFL level as he did in college. The Eagles came to life after they got Hurts involved, and perhaps they should look to use the second-round pick more with how ghastly this offense looks at times.

Hard to care too much about that stuff when the team is down 17-0. But if things continue to go south, there are going to be a lot louder cries for Hurts playing time, whether that's right or wrong at this juncture.

• What was your favorite play during Philadelphia's first offensive possession? Was it Jamon Brown giving up a sack on the first play from scrimmage? The Ravens blowing up a screen play on second down for another five-yard loss? Or John Hightower streaking open down the sideline, hit with a beautiful deep throw from Carson Wentz, only to drop a ball that fell right into his hands?

It was the final play that really did it for me, a week after Hightower had several high-profile mistakes that cost the Eagles in a tight game with Pittsburgh. After earning rave reviews for his play in training camp, Hightower is turning out to be yet another Eagles receiver who shrinks when the spotlight is on. Personally, I'd like to never hear about a receiver tearing it up in camp for this team again. Hightower got another chance to make a play on third-and-long late in the first quarter, and he got walked out of bounds on a play/throw that never really had a chance to be completed.

Philadelphia's offense was straight up garbage in the first quarter, failing to get a first down on three straight three-and-outs to open the game. Baltimore dominated the Eagles in the trenches, and on the rare occasion Wentz had time to step into a throw, there wasn't a whole lot there for him to throw to.

• One exception on that last point — Wentz did have Zach Ertz open over the middle midway through the first quarter, and while Wentz did miss on the throw by a bit, there was absolutely a play to be made by Philadelphia's top tight end. Instead, Ertz seemed to feel a potential hit coming, and a case of alligator arms led to an incompletion.

To be clear, this is a two-way problem, not something to pin exclusively on the tight end. The connection between Wentz and Ertz has crumbled, and whatever you want to attribute it to, from Wentz's inconsistency to the uncertainty about Ertz's future, the Eagles are going nowhere fast if they can't get it together. Bad body language, nonexistent production, and as a result, the Eagles are down one of their most reliable sources of offense.

• Utilizing Carson Wentz as a runner makes perfect sense this season. His legs have been his most consistently effective weapon, and when he has proven himself as a threat to keep it, it has been much easier for Miles Sanders to get busy. Unfortunately, the ball security issues haven't faded from view for Wentz, who put the ball on the turf near the end of the second quarter, gifting the Ravens a short field and jump-starting what had been a mostly bad start for Baltimore.

Wentz has had a turnover in every single game through six weeks and has shown no signs of this problem slowing down or disappearing. To say this is bad is an understatement:

Carson Wentz has more turnovers than every NFL team except Philadelphia

Being a turnover-prone offense/quarterback is never acceptable, but if this was a high-octane offense that thrived by taking risks, maybe you'd accept a few as collateral damage. That is not what is happening here. Wentz is putting the ball on the turf and throwing interceptions in situations with no upside to speak of on most of these plays.

• Maybe things would be better for Wentz if he had any competent offensive line play to speak of. That's not the world we are living in, unfortunately. The undermanned line got absolutely smoked in the first half of Week 6, failing to create holes for Sanders or any time for Wentz. There's a reason teams invest premium resources on both sides of the line. You don't have a chance to win if you don't get push up front.

The right side of the line was particularly ugly, with Calais Campbell absolutely abusing Brown, who filled in for Matt Pryor. That matchup went so poorly that it seemed to take center Jason Kelce out of his game, and the Ravens began getting pressure straight up the gut, something they're normally able to avoid with Kelce manning the middle.

This group is going downhill fast, and it's going to be hard to establish any consistency if they don't pull it together. When Wentz can't get the yardage necessary to convert a fourth-and-short with a QB sneak, you know things have gone off of the rails.

• Sanders had a drop that was arguably worse than John Hightower's, with Wentz finding him in the endzone on a nice throw that was not contested at all by a Ravens defender. Since it's in this section, you already know what happened next — Sanders had the ball bounce harmlessly to the turf off of his hands, eliminating Philadelphia's chance for six points before halftime.

When it rains, it pours, I guess. If Sanders looks this bad, their offense is drawing dead.

• Don't think you can really even be mad about the first touchdown the Ravens scored on Sunday afternoon. That's an elite talent creating something out of thin air, as Lamar Jackson tends to do.

Lamar stays patient and finds Nick Boyle for the score!

Would be nice to have someone on the Eagles capable of doing things like that. Seems like not that long ago they had a QB who pulled plays out of thin air.