Without Mailata, and for a while, Kelce and Dickerson, O-line depth kept the Eagles going 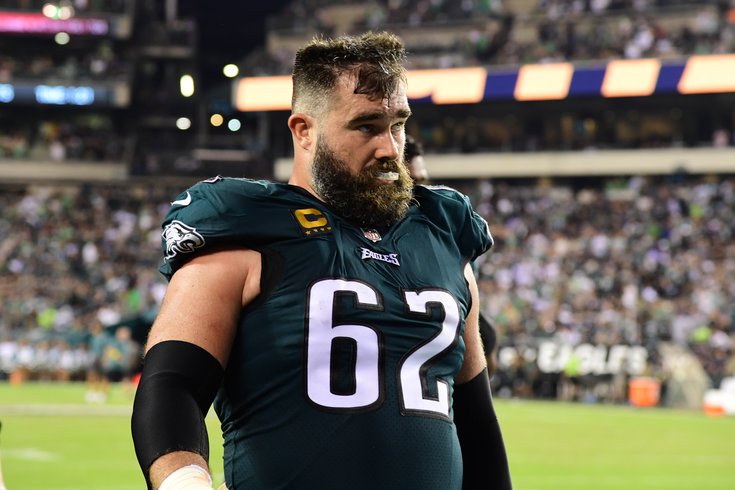 If the "next man up" mentality is still echoing through the Eagles' locker room, it definitely got the offensive line by on Sunday in Arizona.

Already without left tackle Jordan Mailata because of a shoulder injury and working with an Isaac Seumalo who was limited most of the week with an ankle issue, the Eagles had to go a stretch without starting left guard Landon Dickerson and, for a few minutes, veteran center Jason Kelce.

By the time the first half came to a close, center and the left side of the line consisted of second-stringers Cam Jurgens, Jack Driscoll, and Sua Opeta.

Kelce came back for the second half and Dickerson returned a little bit later to get the Eagles to a 20-17 win over the Cardinals.

Sunday was anything but pretty, and the condition of a suddenly banged-up offensive line might be cause for concern going forward, but for now, they're 5-0 and still the NFL's last undefeated team.

"We knew this was going to be a physical game," said Eagles head coach Nick Sirianni "We knew we had a really physical team, we knew our identity is to be physical, and when we needed to the most, we were."

The Eagles entered the season with a near-healthy roster, the healthiest it's been in years in fact, and a returning offensive line unit that a year ago helped create the best running attack in football.

But backup left tackle Andre Dillard went on injured reserve with a broken forearm just before the season started in early September, then last week in the rain-soaked win against Jacksonville, Mailata left the game in the first half and didn't return. Seumalo went down later favoring his ankle.

The offensive line started taking hits, luckily short-term ones – for now – but at positions that can only take so many.

As our own Kyle Neubeck wrote in his first-half observations:

No matter how deep you think the Eagles are on the offensive line, they're eventually going to lose too many guys to continue playing at an elite level. Even with Cam Jurgens waiting in the wings, it's a bit stressful watching Jason Kelce limp to the sideline with a return to action up in the air. Kelce going straight to the locker room is not a great sign.

Plus, quarterback Jalen Hurts, who has been taking hits all season, did take some noticeably harder ones on Sunday.

Dickerson, the second-year guard, went to the medical tent in the first quarter and was originally ruled questionable to return with an injury to his leg. He did check back in during the fourth quarter but left again late with the score tied and the Eagles driving. Opeta subbed in both times.

Kelce visited the medical tent in the second quarter but went right back in. Then, with 4:38 remaining in the first half, he was down on the grass, and Eagles fans everywhere held their breath. He went to the locker room on his own power after being checked on by trainers and when the team returned for the second half, he left the tunnel with his helmet on and was ready to go again.

Kelce said postgame that the trip to the tent was for a concussion evaluation following Hurts' second rushing touchdown on a QB sneak. He cleared but later hurt his ankle, which led to the brief exit. It was a low-ankle sprain, he said, but one that felt well enough to play on after getting taped up. He'll have an MRI on Monday to find out the grade of it.

Late in the fourth quarter, with the taped-up ankle, Kelce made several key blocks that led to big runs on the field-goal drive that went on to give the Eagles the 20-17 lead with less than two minutes remaining in regulation.

But while he was out, Jurgens, the rookie and center in waiting who did have an impressive training camp and preseason, got his first NFL series and held things down. Still, Sirianni will even tell you and has said already, as long as the 34-year-old Kelce can still play at the level he's been playing for years now, he's the guy they want anchoring the line. Jurgens' time isn't necessarily here just yet.

He definitely wanted to tell everyone about Driscoll postgame, who did admirably filling in for Mailata this week and much of last.

"I can't say enough about him," Sirianni said. "He just keeps stepping into scenarios, there are naturally gonna be bumps and bruises along the way on the offensive line, it's just so physical in there, and Jack Driscoll just continues to come in and play big in big moments. I'm so happy that Jack Driscoll's on this football team. He played a heck of a game."

The Eagles are hoping to have Mailata back soon and the team will have more details about Kelce's and Dickerson's injuries as the week goes on. All three's statuses will be something to monitor.

But for now, depth got the Eagles by.

"Our O-line is just deep and physical and nasty," tight end Dallas Goedert said. "It's a lot of fun to play with those guys."