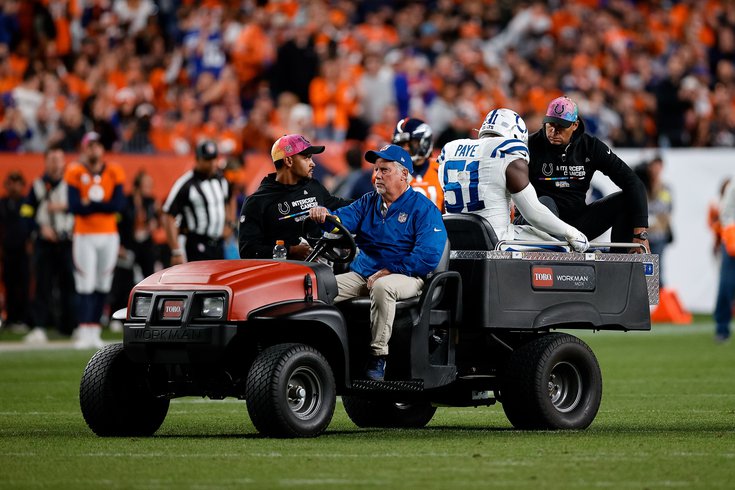 The Philadelphia Eagles had good luck on the injury front through the first half of the season, but the injury bug has bitten them of late, as a number of important players have landed on injured reserve. Their Week 11 opponent, the Indianapolis Colts, listed 12 players on their initial injury report this week, and their best defensive player is on injured reserve.

Here are the Eagles' and Colts' inactives, with analysis.

• OG Sua Opeta: Jack Driscoll will likely be the backup at both guard spots.

• CB Josh Jobe: Jobe is an occasional gunner on special teams. He was ruled out with a hamstring injury on Friday.

Ndamukong Suh and Linval Joseph will make their Eagles debuts.

• TE Dallas Goedert (IR - Week 11): Goedert has 43 receptions for 533 yards and 3 TDs, and has been one of the most efficient pass catchers in the NFL the last two seasons, in addition to his above average blocking skills. He is a top five type of tight end with no obvious flaws in his game who rarely comes off the field. Goedert will have to be replaced by a combination of Jack Stoll, Grant Calcaterra, and Tyree Jackson, who was activated off of the PUP list on Wednesday. WR Zach Pascal could also get some of Goedert's snaps because of his ability as a blocker.

Against the Steelers, he started seeing more action in even-man fronts, aligning as a three-technique. With Davis out, the Eagles had to play Fletcher Cox and Javon Hargrave more than they'd prefer, but they have since signed Ndamukong Suh and Linval Joseph to help pick up the slack.

• CB Avonte Maddox (IR - Week 10): Maddox is the Eagles' starting slot corner. He was replaced in the lineup by Josiah Scott, who gave up a few third down completions against the Commanders in the Eagles' loss on Monday night.

• DE Kwity Paye: Paye was the Colts' first-round pick in 2021, and he is a starter on their defensive line. He has 4 sacks in 7 games this season.

The rest of the Colts' inactives:

There will be no chance of Nick Foles playing today. 😔

• P Rigoberto Sanchez (Season-ending IR): Sanchez tore an Achilles during the offseason. The Colts signed Matt Haack to replace him.