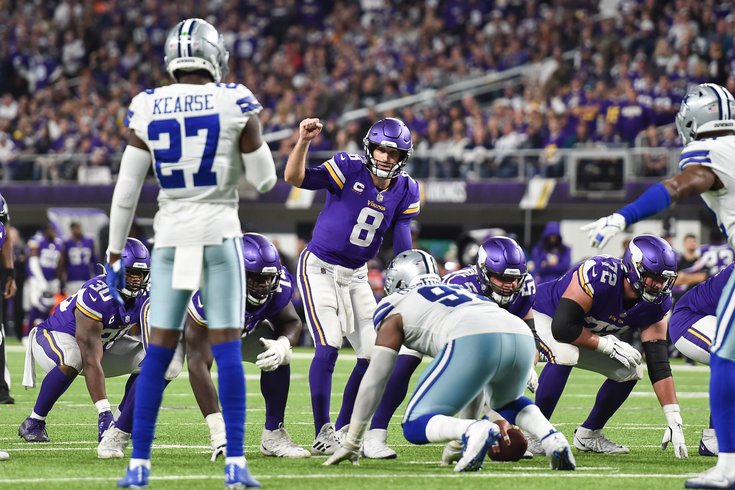 The Eagles will benefit no matter who loses the Cowboys-Vikings matchup.

After suffering their first loss of the 2022 season in Week 10, the Philadelphia Eagles' lead was narrowed in both the NFC East and the NFC in general. They'll look to get back in the win column on Sunday against the Indianapolis Colts, and will hope to get some help from around the rest of the league. Ideal winners bolded.

• Cowboys at Vikings (4:25 p.m.): This is perhaps the most interesting non-Eagles game on the NFL schedule to date this season, at least as it pertains to the Birds. On the one hand, you have the Cowboys, who have been the biggest threats to the Eagles in the NFC East all season, and still probably hold that title even if the Giants are closer in the standings. On the other hand, you have the Vikings, who now have the same record as the Eagles at 8-1, with the Eagles holding a head-to-head tiebreaker over the Vikings for the 1 seed.

It's probably worth taking a look at each of these two teams' remaining schedules from Week 12 on:

But certainly, the Eagles benefit either way.

• Commanders at Texans (1:00 p.m.): If you look at the NFC standings, you'll see that the Commanders could be jockeying for a wildcard berth with whichever of the 49ers or Seahawks does not win the NFC West.

Yes, the Commanders just beat the Eagles on Monday night, but it felt like a fluky game to me, and they are not as big of a threat as either Seattle or San Francisco. The better outcome is if the Commanders get in as a wildcard over either or those two teams.

• 49ers at Cardinals (MNF): As noted above, the 49ers are perhaps a troublesome matchup for the Eagles because they have a lot of really good offensive skill players who break a lot of tackles while the Eagles struggle with tackling. As such, if the Niners don't make the playoffs, that would be good for the Eagles.

• Rams at Saints (1:00 p.m.): If the season ended right now (it doesn't), the Saints' first-round pick, owned by the Eagles, would be fourth overall, up from sixth overall a week ago. Let's fire up the mock draft simulator each week just for fun:

The rest of the NFC South:

There are some other teams with bad records near the top of the draft order who could be jockeying for position with that Saints pick. It's better if these teams win:

On the Raiders-Broncos game, the Eagles benefit with a win by either team. I'll give the nod to the Broncos here, because the Saints played the Raiders this year. Why does that matter? Well, a Raiders loss lowers the Saints' strength of schedule, which is the first draft order tiebreaker between teams with the same record.