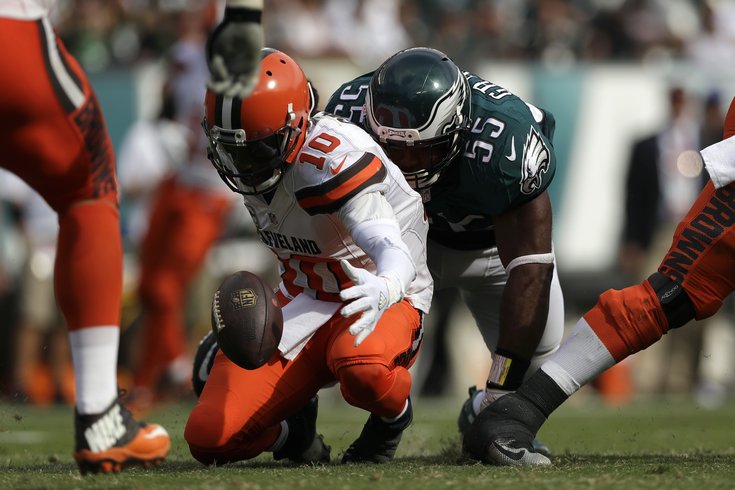 The Eagles defense didn't dominate yesterday, but they gave up just 10 points and under 300 yards, with help from the offense.

In 2015, the Philadelphia Eagles' defense fell apart down the stretch. In their #LastSevenGames, they gave up a disgusting 35.1 points per game on 458 yards per game. Those numbers are absolutely atrocious.

In the nine games before that, the Eagles gave up 20.4 points per game on 359 yards per game. That is roughly a 15 points-per-game and a 99 yards-per-game difference.

In the past, former players who played under Chip Kelly spoke out about feeling fatigued at the end of the season, partly because of the Eagles' practice regimen, but also because of the absurd number of snaps the Eagles ran both on offense and defense (especially defense). The numbers above indicate that end-season fatigue was indeed very likely a significant issue.

Because the Eagles under Kelly ran that constant up-tempo offense, their defense was forced to face more drives than any other team in the NFL. In each of his first three seasons with the team, Kelly's offense was dead last in time of possession per drive, per FootballOutsiders.com:

When the Eagles scored under Kelly, they scored quickly, and when they went three-and-out, you might miss the drive in its entirety while getting a beer from the fridge.

In their Week 1 game against the Cleveland Browns, the Eagles defense faced a mere 52 snaps, which projects to 832 on the season, which would be a difference over the course of a season of about four or five games' worth of snaps. Safety Malcolm Jenkins mastered the obvious on that point.

"To not have that many snaps is a good thing," said Jenkins. "That’s less opportunities for the opponent to score."

Wow. You don't say. See how that works? On average Sunday afternoon against the Browns, the Eagles offense clicked 3:17 per drive off the clock on offense. That is an enormous difference in "real time."

"I thought Carson and the offensive line did a great job controlling the game, and obviously that’s going to help us stay fresh on defense," said defensive end Connor Barwin.

That extra time on the sidelines not only allowed the defense to get breathers that they're not used to, but they were also chomping at the bit to get back out onto the field.

“It was weird," said defensive end Brandon Graham. "It was good because I know it’s going to help me later on in the year, where a lot of people are hurting and trying to figure out how they’re going to get their body right before the game. I know I’m going to hurt a little bit but I’m not really that banged up. It was fun. We were flying around today... It definitely helps us catch our breath, and gives us that anxiousness to go out and make more plays. We’re just like, ‘Alright, now we’re ready. C’mon y’all. Score. Do what you’re going to do, so we can get back out there and have some fun.’”

Of course, all credit doesn't go to the offense, as the defense did its part too. To start the game, the Browns went three-and-out, three-and-out, and then four-and-out and a turnover on downs. On the day, the Browns averaged 1:35 of clock on their drives, and were 2 for 10 on third down conversions.

"A lot of that is attributed to us playing good defense," said Hicks. "The fact that we were getting them off the field on third down and having a lot of three-and-outs. We started off the game with two three-and-outs, and then a turnover on downs. That’s huge."

The personnel isn't much different defensively this season than it was a year ago, but there's a decent chance the Eagles could go from the 30th ranked defense in 2015 to somewhere in the top 10, largely because that up-tempo offense is gone.

The best defense is a good offense, or at least an offense that isn't punting by the time you get back from taking a whiz during the commercial break.