Wentz, Matthews show just how dangerous they can be 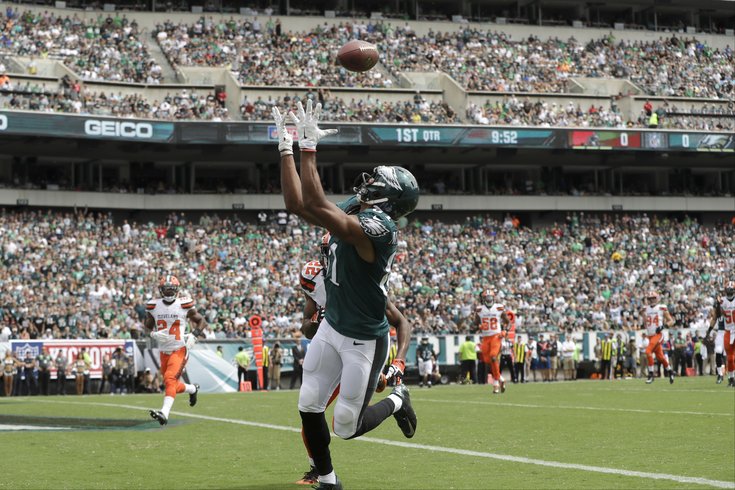 Carson Wentz said several times before his NFL debut that he wasn't paying any attention to the fact that the Cleveland Browns passed on the opportunity to draft the rookie out of North Dakota State. But he certainly didn't waste any time proving them wrong.

Not only did Wentz lead the Eagles on a 75-yard scoring drive to open the game, but he thoroughly outplayed his Cleveland counterpart, Robert Griffin III. When all was said and done, it was the home team's quarterback – 22/37 for 278 yards and a pair of touchdowns – who looked like the veteran, not RGIII – 12/26 for 190 yards, one touchdown and a fumble that went out of the back of the end zone and resulted in a safety for the Eagles defense.

Browns coach Hue Jackson with a rave review of Carson Wentz: "I thought he was fine."

Geez, I can't wait to see what he had to say about his own quarterback ...

The sound bites coming out of the other, more upbeat locker room after the Eagles' 29-10 win, were just slightly more effusive in their praise of the second-overall pick in this year's draft.

"I'm not surprised [by how well he played]," said wideout Jordan Matthews, who led all receivers with 7 catches for 114 yards and a touchdown in his first game back after missing the entire preseason with a knee injury. "His motto is 'A-O-1' -- for anybody who doesn't know, that means 'Audience Of One' -- so he doesn't let any of the outside stuff affect him. He hones in on what he needs to do and then he goes out there and perfects his craft. So I wasn't really that surprised."

The other big-name rookie making his debut on Sunday was head coach Doug Pederson, who admitted to having some pre-game jitters. The former NFL quarterback was out on the field joking with Wentz during warmups, in part to keep his quarterback relaxed, but also to help his own nerves.

After the game, however, Pederson echoed Matthews' sentiment, one that many other players seemed to share.

"It's not surprising, because of us being around him for so long now," Pederson said of the Wentz's performance. "And just knowing the maturity level that he has and the things that I was trying to get across to the fans, to the media: This is who he is. This is his DNA.

"And he really handled himself great all week long. He prepared like he was a five-, six-year veteran and obviously he played that way ... how he handled himself with the maturity level was outstanding."

So was the rookie nervous?

"No. I felt very confident," Wentz said. "Right from the first snap, I was locked in and it was just football again."

This is probably about the time you're thinking to yourself, "Come on, Matt. They beat the Browns, not the Seahawks." And while there is some truth to that, don't forget that it's only been eight days since Wentz was named the starter.

He was also limited this preseason in how much practice time he had with Matthews, who quickly became his favorite target of the game despite a drop on the first passing play of the game. The work they did get in this offseason, however, is more important now than ever.

"It just really goes back to the offseason, the spring and right after the draft and all summer long being around those guys," Wentz said. "Obviously, the amount of reps was limited, but we made it work and at the end of the day, it comes down to players making plays and that's what we did."

The two looked totally in sync against the Browns, probably because even when the two weren't able to fully practice, they continued to work together and develop the kind of relationship you like to see between QB and receiver.

"The one thing that Carson and Jordan did, even while they were sort of down in preseason, is they worked together," Pederson said. "They threw routes together. They worked together. So they maintained that chemistry that they needed. Jordan had a great week of practice. They really connected well all week long and it was great to see Jordan out there doing the things he's capable of doing. And Carson feels very comfortable throwing him the football."

They've also been trying to get inside one another's head. Because according to Matthews, he wants to know what makes his quarterback tick, on and off the field.

"It's been cool, man. I really like music -- I don't get into TV and all that -- so I was like, 'Bro, what do you listen to out in North Dakota? Because I don't know of any rappers from North Dakota,'" Matthews said with a laugh. "I was like, 'What's your favorite album?' And he was like Jason Aldean. And I went to school in Nashville, so I kind of heard Jason and was like, 'OK, cool.' ...

"If I'm going to learn this guy's mindset, I've got to listen to his music. So I listened to the whole album; it was pretty good. And there was a song on there called 'Fly-over States,' and it made sense because where he lives is a fly-over state. I ain't ever been to North Dakota, so I kind of got the feel of like, who he is. Humble guy, North Dakota. And I'm like, cool, I'm a humble guy from Alabama.

Wentz laughed when the first question of his postgame presser was about his thoughts on Kanye.

"Kanye's good," he said. "But I still like my country first."

And that rapport the duo built throughout the summer didn't waste any time producing results on the field.

"It was man coverage and he said he was going to go to me all week on it," Matthews said of the play that resulted in his 19-yard touchdown catch. "We threw it twice on Thursday at practice. So he was telling me, 'If they go man in this situation, I'm throwing it to you. Like, I'll close my eyes and throw it. And I was like, 'Ok, I'll catch it.' Great communication all week."

But that's only part of the story. Without the rookie making a perfect throw, the result of that drive could've been quite different.

"You can't throw those any better," Matthews said of Wentz's two touchdown passes. "He's putting them right where you need to be; he's waiting until you break leverage on a guy so even if he tries to recover it's too late. And that's all about timing, accuracy and poise, not getting rattled when you say 'OK, I've got this matchup, let me rush this ball out here.' He's taking his drop and putting the ball where it needs to be."

But ask the quarterback, and he'll say that play was all Matthews.

"I knew he would get a good release and beat his guy," Wentz said. "That's what he did, and I just threw it out there and gave him a chance and he made a heck of a play."

Wentz may have completed just under 60 percent of his passes, but that wasn't entirely his fault. There were at least two dropped passes, a couple of others batted at the line of scrimmage, and two or three others that the rookie wisely threw away to avoid being sacked. Basically, the kind of incompletions you can live with.

To a man, the Eagles said they aren't going to be content after the win -- as is the case with almost every team following Week 1, there's still plenty on which to improve.

But as far as NFL debuts go, Wentz and his teammates should be pretty pleased with the first game of the Doug Pederson Era. Next week, they'll get their first taste of primetime when they face the Chicago Bears on Monday Night Football.

"Jordan [Matthews] was already saying, 'Let's get back to work.' That's exactly the mentality we need," Wentz added. "We're going to learn from this game, and we are going to build on it. It was a great first team win, but we're going to head into Chicago next week right away and it's on to the next."