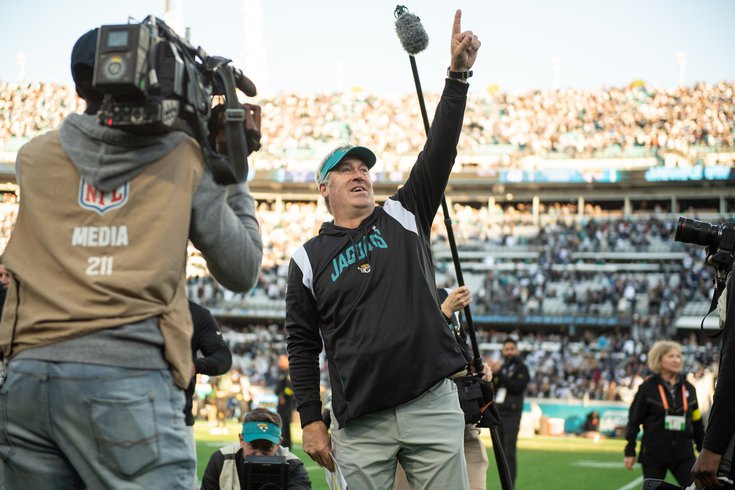 Jacksonville Jaguars head coach Doug Pederson celebrates the team's overtime victory over the Dallas Cowboys on Dec. 18. The Eagles, his former team, sent him an order of cheesesteaks on Monday.

The Jacksonville Jaguars pulled off an impressive comeback on Sunday against the Cowboys, overcoming a 17-point deficit to steal the game in overtime, 40-34, with a pick six that had head coach Doug Pederson ripping off his headset in the late afternoon glow of northeast Florida.

The Jags' win was their first against an NFC opponent in 20 tries, an indication of the turnaround Pederson has on his hands to restore the team to relevance. And in a weak AFC South, the 6-8 Jaguars actually have a shot at the postseason, if Pederson can sustain the momentum.

With the Cowboys loss, life was made a bit easier for the Eagles heading into their Christmas Eve matchup in Dallas. Philadelphia only needs one victory in the final three weeks of the season in order to clinch the NFC East and the first round bye that comes with the top seed in the conference. Had Dallas won, the stakes on Saturday would have been much higher at a time when the Eagles are dealing with the uncertainty of the shoulder sprain suffered by quarterback Jalen Hurts in the team's win over the Bears, improving them to 13-1.

As a "thank you" to Pederson, someone in the Eagles organization ordered 35 cheesesteaks for the former head coach in Philly, who led the team to its first Super Bowl title nearly five years ago.

Jacksonville cheesesteak shop Philly's Finest, which has been around since 2001, got the unusual call for 35 steaks and 25 orders of fries to be sent to TIAA Bank Field on Monday, the Florida Times-Union reported. The restaurant's owner, Jeff Harris, said it was a surprise to get the call from someone in Philly.

"I was in shock. Not by the amount of sandwiches because we do that many sandwiches quite often," Harris told Jaguar Report. "We opened in 2001. A couple of months ago, we just sold our one millionth cheesesteak. But to have somebody call down from Philly was kind of a little bit overwhelming."

The order arrived with a note from the restaurant.

"Coach Pederson, enjoy a taste of Philly! Great win over the Cowboys! Next time you are out at the beach, please stop in and see us at Philly's Finest 15th Ave. N. Jax Beach," the note said.

A spokesperson for the Jaguars confirmed to the Florida Times-Union that the cheesesteaks and fries were "promptly eaten."

Harris said his restaurant has grown to be a popular destination among locals, Philly transplants and people vacationing in Jacksonville.

"We fill every seat for every Eagles game at 11:30 in the morning, and that is 180 seats and people are standing," Harris told Jaguar report.

Pederson's departure from the Eagles was tough to see after Philadelphia's brutal 4-11-1 season in 2020, which became the catalyst for the team's ascent to the top of the standings under Nick Sirianni in just his second season leading the team. If the Eagles follow the script Pederson set in his second season in Philly, another Lombardi Trophy will be waiting for them in February.