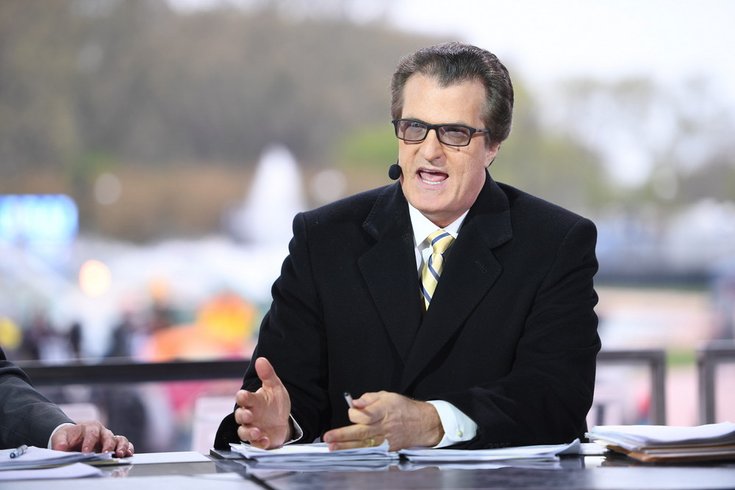 Now that the 2018 NFL Draft is in the books, it's time to give the Philadelphia Eagles arbitrary letter grades, which we also did this morning. Here's what some of the national guys think:

It's good to be the Eagles. Coming off a Super Bowl title, they have no major needs and get to develop starters -- not try to draft plug-and-play guys. They're looking for impact depth. That's why we saw GM Howie Roseman trade out of the last pick in the first round to move down 20 spots and add an extra 2019 second-round pick (plus pick 125 in this draft). That 2019 pick is an extremely valuable one to stash away.

Now, you have to laugh at the Eagles trading up three spots to take tight end Dallas Goedert ahead of Dallas (49) with the draft in the Dallas area. And my best comp for Goedert all along was Zach Ertz, so now the Eagles have both players. Goedert is the best pass-catching and most athletic tight end in this class. Remember: Trey Burton and Brent Celek are both gone from 2018, so Goedert is going to play. Philadelphia led the league with 110 receptions by tight ends last season. If Goedert had gone late in Round 1 -- maybe to Philly! -- it wouldn't have surprised me.

The Eagles didn't have a third-round pick due to the Jordan Matthews-Ronald Darby swap with Buffalo last year, so Philly had only one pick on the first two days. Fourth-rounders Avonte Maddox (125) and Josh Sweat (130) are talented and athletic. Maddox was a four-year starter who ran a 4.39 at the combine. Sweat had 29 tackles for loss in college and had a 39.5-inch vertical jump at the combine. I moved up Matt Pryor (206) over the past few weeks after people in the league told me he was going to move to guard. And how about the Australian former rugby league player Jordan Mailata going late in the seventh round? Philly is going to try to make him an offensive tackle.

The reason this class isn't a straight "A"? Not a single running back (though they did announce the re-signing of Darren Sproles when the day ended). If that's the only bad thing I can say, the Eagles must have had a good day.

The skinny: General Manager Howie Roseman took advantage of other teams ignoring Lamar Jackson by trading out of the first round so Baltimore could select him. He grabbed the Ravens' 2019 second-round pick and moved up in the second round on Friday night to select a tight end they could have taken in the first round: Dallas Goedert. He'll be an outstanding player in the Jimmy Graham mold. The Eagles had given up their second-round pick to the Browns to get Carson Wentz two years ago and traded away their third-rounder to Buffalo, giving them just two picks in the first three rounds. The feisty and small Maddox can help replace Daryl Worley. Roseman reeled in Sweat, a first-round talent, in the fourth round, only because of medical concerns. Mailata's potential as a 6-foot-8, 350-pound offensive tackle without football experience (he's a former rugby player) was worth a flyer in the seventh round. They could have used a little more linebacker depth, but they might find it on the undrafted free agent market.

#JimmySays: An A grade might be a little generous, but good on Reuter for looking at the picks that were made as opposed to the number of picks.

With their first pick, the defending Super Bowl champions leapfrogged their division rival Cowboys to draft a tight end (Dallas Goedert) who can play alongside Zach Ertz. Head coach Doug Pederson understands that defenses hate an offense that can throw the ball out of two tight end sets, and that’s especially true when that offense has a running game as expansive and effective as Philly’s. With Ertz and Goedert on the field together, No. 3 linebackers will now be forced into coverage. Carson Wentz is licking his chops.

After that, it was just about building depth and taking the best players available—a perfect scenario for any team, and an unthinkably perfect one for a defending champion. The Eagles didn’t address their inside linebacker situation after their predraft behavior suggested they would. But even if the injury-prone Jordan Hicks doesn’t bounce back from last year’s torn Achilles, riding one more year with Mychal Kendricks alongside the recently re-signed Nigel Bradham isn’t the worst thing.

#JimmySays: If I'm going to quibble, I'll disagree that the Eagles' pre-draft actions suggested they would draft a linebacker, considering they re-signed Bradham, and signed a pair of free agents in Corey Nelson and Paul Worrilow.

Howie Roseman keeps adding depth where the Super Bowl 52 champions lost it, as Goedert (Trey Burton), Maddox (Patrick Robinson) and Sweat (Vinny Curry) help the Eagles reload that those positions. With Jason Peters 36 and coming off a major knee injury, Pryor is a worthy developmental tackle. Mailata, the raw rugby renegade from Down Under, was a worthy gamble for a confident team.

#JimmySays: Pretty much anything the Eagles would have drafted this weekend would have been for depth, which is crazy. This is the most loaded Eagles roster I can ever recall.

Champs often draft for depth, and GM Howie Roseman traded down to get more. Stealing TE "Dallas" Goedert in Jerry Jones' backyard was a nice touch. But getting Florida State pass rusher Josh Sweat in Round 4 might wind up being Roseman's best pick.

#JimmySays: The Eagles actually ended up with fewer picks at the end of the draft than what they begin with.

Overview: The Eagles didn’t have many picks after trading No. 96 to the Bills for Ronald Darby and No. 131 to the Dolphins for Jay Ajayi, but those players remain under contract with the team and are considered part of this draft class. As is Michael Bennett, although he is currently in legal hot water. The Eagles also acquired the Ravens’ 2019 second-round pick in Thursday’s Lamar Jackson trade. Philly began its draft by leapfrogging the division-rival Cowboys for Goedert, the best two-way tight end in this class and a surefire Dallas target with Jason Witten retiring. Maddox is a feisty slot corner with lightning-quick short-area agility, helpful when covering quicker-than-fast interior receivers like Jamison Crowder, Cole Beasley, and Sterling Shepard. Sweat has first-round athleticism and pass-rush potential. He fell due to knee problems that have plagued him since high school. Pryor’s probable ceiling is a long-term swing guard-tackle backup. Massively athletic rugby freak Mailata was a seventh-round shot in the dark.

#JimmySays: I don't disagree with anything here.

Day 2: With one pick in the first two days of the draft, it’s just as well the Eagles roster is in good shape, and they showed that by making something of a luxury pick with the selection of TE Dallas Goedert out of South Dakota State. Goedert has reminded many in the pre-draft process of Zach Ertz, so it’s interesting to see the two players on the same roster. Against admittedly questionable competition, Goedert was on another level of dominance, averaging 8.1 yards per catch after the reception and breaking a dozen tackles along the way. Goedert’s run-blocking grade was solid, but this was against FCS competition and it will be unlikely to be a major strength at the next level.

Day 3: Josh Sweat is an edge rusher a lot of people had higher on their boards but had some injury concerns. He had 34 total pressures in 2017 and 32 defensive stops. Avonte Maddox would be a much higher pick if he wasn’t just 5-foot-9 as he had 30 pass breakups over the past four seasons. They also grabbed an Australian NRL rugby player in OT Jordan Mailata in the seventh round as a flier.

After sitting out the first day of the draft, the Eagles hit on the second and third days of the draft. South Dakota State tight end Dallas Goedert should easily replace Trey Burton and Brent Celek from a pass catching standpoint.

At the 130th pick, the Eagles got a pass rusher in Josh Sweat that some thought would sneak into the first round. Where he plays in Philadelphia is a little unknown. It could be standing up since the Eagles have so many defensive linemen. If he’s healthy, he could be a steal of the draft.

The Super Bowl champions got better during the draft. The knock is that they didn’t get an offensive lineman earlier than Matt Pryor in the sixth round. He’s a solid right tackle. The Eagles also picked up one of my sleepers in Australian rugby player Jordan Mailata in the seventh round.

#JimmySays: Sweat will play DE, just FYI. They'll just take their time with him, knowing that Chris Long is certain to retire soon, Michael Bennett is a short-term player, and Brandon Graham's contract remains up in the air.