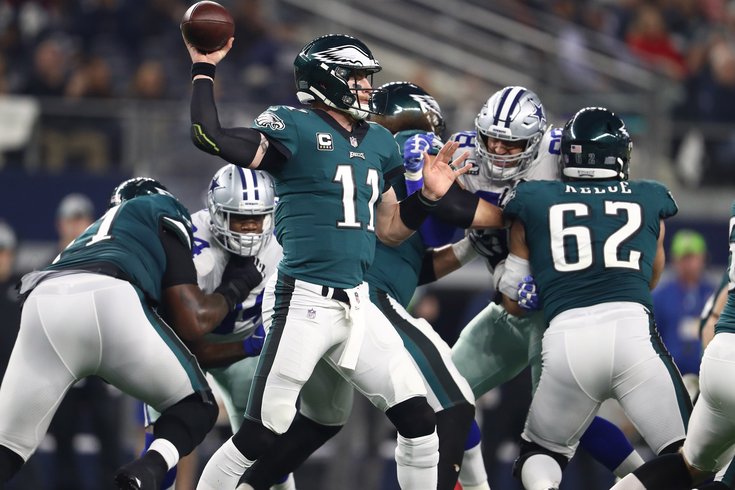 Carson Wentz will remain under the Eagles' control through the 2020 season.

The Philadelphia Eagles made the extremely obvious decision to exercise a fifth-year option on franchise quarterback Carson Wentz. Barring a contract extension between now and next season, Wentz's 2020 salary will be $22,783,000, according to a league source. His cap number in 2019, again, barring an extension, will be $8,487,927.

Wentz had a promising rookie season in 2016, when he was able to start all 16 games. He showed flashes of greatness, but he was hamstrung by missing offensive linemen and one of the worst wide receiver groups in the NFL.

In 2017, aided by better weapons in the passing game, Wentz was arguably the best player in the NFL before he was lost for the season with a torn ACL. Without Wentz's contributions, the Eagles almost certainly would not have earned home-field advantage throughout the playoffs, and likely would not have won their first ever Super Bowl as a result.

In 2018, Wentz missed the team's first two games while still recovering from that ACL surgery. When he returned, he was clearly not 100 percent healthy, and yet, still improved on his quarterback rating from the previous season. It would later be revealed that he had been playing through a fracture in his back, which would eventually cause him to miss the final three regular season games, as well as two playoff games.

Wentz still has to put injury concerns to rest, but when healthy, he is, in my view, an elite talent, and a top-five caliber quarterback.

So what is the 'fifth-year option?'

Wentz was drafted second overall, obviously, so he would fall into the former bucket.

Ultimately, there's little risk to exercising Wentz's fifth-year option, and even if there were, the Eagles would not let him slip away under any circumstances.