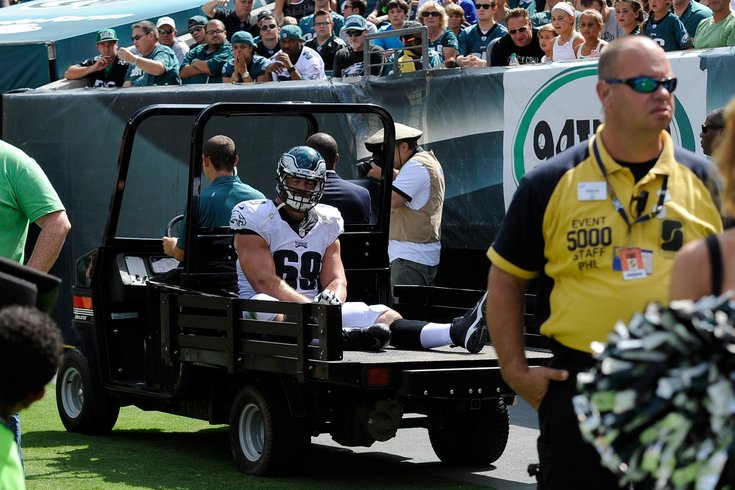 The Eagles have three spots along their OL that are far above the league average at their positions, in terms of age:

• Jason Peters (33) is the second-oldest projected starting offensive tackle in the NFL, behind only Bengals OT Andrew Whitworth, who is older by a month. The Bengals prepared for Whitworth's decline, drafting offensive tackles (Cedric Ogbuehi of Texas A&M and Jake Fisher of Oregon) with each of their first two picks in the 2015 draft.

• Evan Mathis, who turns 34 in November, is the oldest projected starting offensive guard in the NFL. Additionally, it would appear Mathis' relationship with Chip Kelly is strained. Speaking to reporters during day three of the draft, Kelly remarked, "Evan has been available to trade for two years now, and we've never had an offer for him. That's through his agent and him. They've asked us if we can renegotiate a contract and see what he can get, and we've obliged them with that, but we've never had an offer on him."

• The Eagles released Todd Herremans (33 in October), but it seems he'll be replaced by journeyman offensive linemen Allen Barbre, who will turn 31 in June and is returning from a serious injury. Barbre is not only among the oldest starting guards in the league, but he is inexperienced, with just 797 career snaps (less than a full NFL season) since he entered the league in 2007. While he has low mileage, there's little in the way of proof that he can be a good starter over a 16-game NFL season.

Beyond the starters, the Eagles lack quality depth. The top three backups are Matt Tobin, Andrew Gardner, and David Molk. Tobin is a player the Eagles like, but he was hampered with injuries and did not play well in seven starts in 2014. Gardner, who is aging in his own right at 29, is on his sixth team in the pros, and was just as ineffective in 2014 as Tobin. Molk was an adequate backup for Jason Kelce, but is really only a center who can play guard in an emergency.

The Eagles themselves recognize that their offensive line needed help. According to Jeff McLane of the Inquirer, the Eagles made a play for former Broncos OG Orlando Franklin in free agency, but Franklin signed in San Diego for $36.5 million over five years.

The Eagles also failed to draft any offensive linemen, even though the Eagles felt it was a very strong position in this draft. "I think there are certain positions of strength and weakness," said Eagles VP of Player Personnel Ed Marynowitz in his pre-draft media session. "This draft in particular I think especially in the mid rounds, or the 'solid starter' categories as we would call them, there are some guys on the offensive line that I think can help, and can contribute."

Chip Kelly echoed that sentiment, speaking to reporters on day three of the draft.

"There were guys that we really wanted in this draft, but you know, in each round they were taken before we had an opportunity to pick," said Kelly. "We're going to stick to our board, and I've talked about that, when it crosses. But again, I think you look at our line in terms of being able to go play this season, I think we're excited about the group we have to go play this season.

"We do have to address it as we move forward in the future, and then maybe there's one or two or three or four guys that we sign here that are undrafted guys that will have an opportunity like Matt Tobin that's come in here and made our team as an undrafted guy, and that's kind of the direction we're going to go, at least this year."

The best example of the Eagles missing on the OL was probably in round four, when four quality offensive line prospects were drafted just before the Eagles were set to pick at 113rd overall.

At pick #113, the Eagles traded out, although they were at least able to get decent value (a third round pick in 2016 from the Lions) in return. Still, that's not the first time this has happened. During the 2014 draft, it appeared that the Eagles were targeting OL help in the 3rd round, but when 7 offensive linemen were selected in the 19 picks before the Eagles were on the clock with the 83rd overall pick, they traded out.

The Eagles' "swing and miss" on offensive linemen in 2014 was a scenario that former general manager Howie Roseman referred to as "a dagger in the heart." This year, you could classify it as a dagger in the (fill in a body part of your choice).

The Eagles offensive line, when healthy, is still very good. Kelce and Johnson are good young players, and Peters and Mathis both made the Pro Bowl last year (although there's an argument to be made that Peters' game fell off some in 2014). Of course, the key phrase there is "when healthy." In 2013, four of the Eagles' starters played more than 99% of the team's offensive snaps. In 2014, their continuity took a major hit when they didn't have the same luck.

The Eagles' injury issues contributed in a major way to their sharp decline in rushing efficiency:

The Eagles went from being the best rushing team in the NFL to one that was merely "good," and the trickle down effect was felt by Nick Foles and a passing game that could no longer capitalize on opposing defenses who were overly concerned with the run.

The Eagles' indifference to the offensive line could have drastic short-term and long-term effects.

• In the short term, the Eagles will be in decent shape if everyone stays healthy. If they don't stay healthy, they'll be counting on undrafted free agents and marginal NFL roster-worthy players to provide their depth along the OL. It has the strong potential to cost them games, like it did in 2014.

• In the long term, the Eagles don't have much to be excited about on their bench in terms of future starters, which is obviously not ideal, seeing as they have three positions where they will need replacements in the immediate future. Replacing three starters on the OL in a short amount of time is extremely difficult, and even IF the Eagles are able to find quality replacements, it'll take time for the new unit to develop rapport, which again, is not easy. Had they added young talent to the mix, those young players could be developed and acclimated to the Eagles' offensive scheme, with an eye toward inserting them in as starters in 2016 or 2017. Instead, the Eagles are going to have to replace a bunch of starters along the OL simultaneously when the older guys experience an inevitable decline.

It was imperative that the Eagles added youth and depth to the offensive line, and the failure to do so may eventually end up being their their biggest mistake this offseason.

Oh, and the Eagles' new "franchise QB" is arguably the most injury-prone player at his position in the NFL. So there's that.