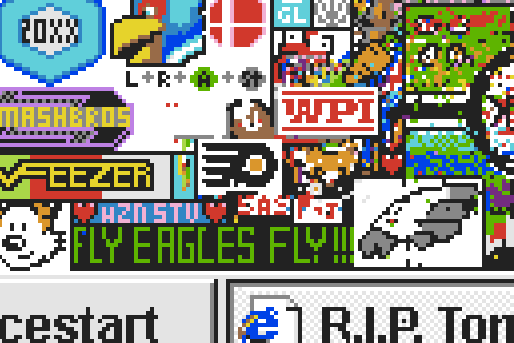 Philadelphia was represented at least twice in the final version of Reddit.com's latest social experiment that allowed the site's millions of users to place pixels, one at a time, on a blank digital canvas, creating a massive collaborative artwork. When it ended Flyers and Eagles logos, along with the title to the Eagles' fight song, 'Fly, Eagles, Fly,' were visible in the bottom left corner of the image.

The Philadelphia Eagles and Flyers have achieved Reddit immortality, presumably thanks to a group of patient, well-coordinated fans – who apparently also had too much free time this weekend.

Reddit – a hive-minded community that describes itself as at the "front page of the Internet" – completed it's latest social experiment Monday afternoon. The site invited its millions of users to to contribute to a cooperative piece of art, one pixel at a time, in the subreddit r/place.

Using the colors of his or her choice, users meticulously created images on 1,000-by-1,000 pixel-wide canvas. This was a members only event, but users could draw anything they liked.

One catch was that the pixel artists only could place a single square of color every five minutes. Users who shared common goals were forced to band together to get their artwork accomplished.

This produced more than sports logos, like those of the Eagles and Flyers.  National pride was on display, too. For example, some created and recreated the German and French flags, but ultimately the flag of the European Union survived.

Among the more impressive endeavors was the painting of the "Mona Lisa," the prism from Pink Floyd's "Dark side of the Moon" album cover, Van Gogh's "Stary Night," portraits of David Bowie, "Crocodile Hunter" Steve Erwin, as well as Pokemon and Minecraft characters and more.

Reddit timed the experiment to begin on April Fools' Day. In 2015, the site conducted a different social experiment, called "The Button."

Below, the time-lapse video shows the metamorphosis of r/place canvas.