Week 15 NFL picks: Rounding up the experts' predictions for Eagles vs. Redskins 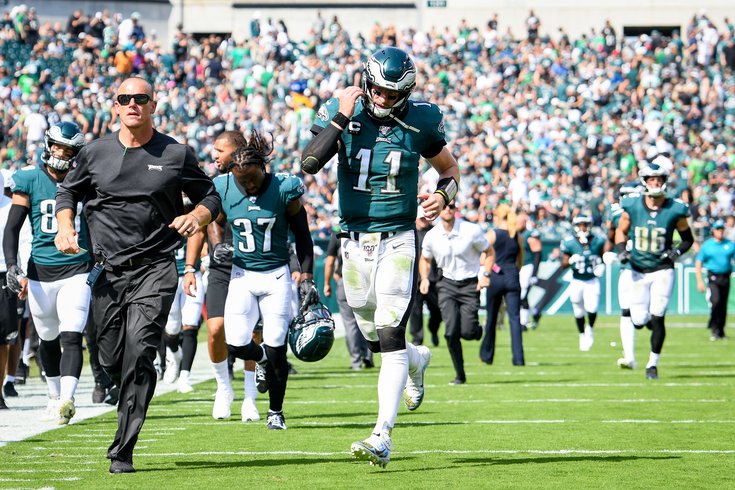 For all their ups and downs, the Eagles can still contend if they take care of business.

It's easier said than done — even with the lowly Redskins next on the slate — as the injuries continue to pile up on the offensive side of things as Week 15 approaches.

Carson Wentz may be good enough to beat the Redskins all by himself, but if the Eagles don't get healthy by the end of the year, their chances of going deep into the playoffs against the NFL's top teams probably won't be good. Especially based on their track record this season.

But that's something to worry about on another day. The Birds will be looking to get back to .500 in Washington Sunday at 1 p.m.

We've already given you some matchups to watch, broken down the injuries on both sides of the ball, and offered our own predictions for Monday night's primetime matchup. Now, as we do every week, it's time to take a look around the nation to see how various experts, both local and national, see Sunday's game playing out...

• PhillyVoice staff: The Eagles took care of business last week, validating all six of our writers picking them over New York. This week, it's nearly unanimous, with one writer — Matt Mullin — going rogue with pessimism ahead of Week 15:

If it's the former, the Eagles should be fine. But if it's the latter, they're going to be embarrassed again on Sunday. Unfortunately, I just don't think the Birds will have enough offensive firepower to get the job done on Sunday. Without any of their starting wide receivers, Carson Wentz will be throwing to Zach Ertz, Dallas Goedert, Greg Ward, J.J. Arcega-Whiteside and some guys you've probably never even heard of. The Washington defense has been just OK this season — their last place offense hasn't been doing them any favors — but they've been playing well of late and there's just very little on this Eagles offense to scare them.

And if the offense struggles to get going, that's going to mean the defense could find itself on the field quite a bit this Sunday. They're certainly good enough to shut down Haskins and the Washington offense, but as we've seen in recent weeks, when the Eagles offense is a stream of endless three-and-outs, the defense gets stuck picking up the slack.

This could very well be a relatively low-scoring affair, and I don't think that bodes well for Philly.

• ESPN staff: Eight of their nine experts are picking the Eagles, with Jason Reid being the only one to pick the Washington.

With each passing week, Dwayne Haskins' solid rookie play becomes more impressive. Since taking over as Washington's starter in Week 9, he's 17th in PFF's grading among 38 qualifiers. A strong offensive line and running game have helped, and the potential return of receivers Trey Quinn and Paul Richardson would help some more. Philadelphia's receiver group is unlikely to get such good news, while Lane Johnson's injury only further reinforces that even Eagles wins from here on out figure to be slogs. At least Philly's strong rush defense matches up well with Redskins interim coach Bill Callahan's game plan. Adrian Peterson may wind up with 100 more carries in what could be his final three games as an NFL starter.

• CBSSports.com staff: Will Brinson is the only of CBS's eight experts taking Washington this week.

• OddsShark: Their computer models see Philly as a touchdown better and predict they'll win and cover the spread.

Something clicked for the Eagles in the second half of Monday night’s game; if it continues, the Eagles will keep winning.

Both these teams stink, in a division that stinks, but the Eagles still have an opportunity to win that division, and they’ll play well enough to beat a bad team.

What's left of the Philadelphia Eagles?

That's the question the majority of our analysts are asking as they try to determine whether the depleted, potentially run-down Eagles can even cover a 4.5-point road spread on the road against a feisty division rival on Sunday in Washington.

"Philly had to scratch and claw to beat the Giants at home," Gagnon said, "and it lost offensive starters Alshon Jeffery and Lane Johnson in the process. On short rest coming off an overtime game, an injury-ravaged team that has just once convincing win dating back to Week 6 can't possibly be laying more than a field goal on the road. I know the Redskins aren't good, but they've actually managed to outscore their last three points by an average of 2.0 points per outing. They'll hang in here, and they might even pull off the upset."

Washington's defense is quietly one of just nine in the league that have surrendered fewer than 20.0 points per game since Week 6. They generate takeaways, and they often keep games close by grinding out yardage on the ground.

But Sobleski stands in dissent. He's backing an Eagles team that is well-coached, mentally strong and resilient with its back against the wall. The Eagles went on a three-game winning streak in December 2017 despite losing quarterback Carson Wentz, and they also finished last season on a three-game winning streak to sneak into the playoffs. They need this one badly, and they might not mess around against an inferior opponent.

They could be fired up after last week's comeback, and the Redskins are also far from healthy after losing running back Derrius Guice to a knee injury in Week 14. So be careful with this one.

Washington has been frisky in the past few games. The Eagles are thin at wide receiver and could be without right tackle Lane Johnson. Doug Pederson’s team stays alive in the NFC East mix, but it’s close.

• SBNation staff: It's a completely clean sweep, as even their non-human pickers are taking the Eagles to win in Week 15.

• Bleeding Green Nation staff: No surprises here, as all of their writers are going with the Birds.

• Philadelphia Inquirer: All of their Eagles writers are taking the visitors to succeed Sunday afternoon. Here's Les Bowen, who predicts a tight 19-16 win:

The Eagles won’t have Case Keenum (30-for-44, 380 yards, three touchdowns in the opener) to worry about this time. Jim Schwartz is good at confounding inexperienced quarterbacks, such as rookie Dwayne Haskins. The Redskins are more of a running team under Bill Callahan than they were under Jay Gruden, but they have lost Derrius Guice for the season. Adrian Peterson, while still formidable, isn’t really AP anymore. And the Eagles can shut down the run well enough.

If there is a danger here -- and we’re talking about the Eagles, of course there’s a danger -- it’s that even without Ryan Kerrigan, the Redskins can get after the quarterback, and Halapoulivaati Vaitai is going to be replacing right tackle Lane Johnson (ankle). The Birds need to stick with the run, and Carson Wentz needs to take care of the ball. The visitors might need to get comfortable winning a low-scoring game, unless Haskins, who has seven INTs with his three touchdown passes, gives the ball away a lot.

The group of receivers Wentz is taking into FedEx is just ridiculous, absolutely the thinnest resumes of any group in the NFL. Howie Roseman should abjectly apologize to his quarterback. The Eagles aren’t beating Dallas next week with this weapons array, they’re going to need Nelson Agholor and Jordan Howard back, at the very least. But for this week, Wentz might be able to keep the playoff flame burning, even if it flickers and smolders a bit.

• NJ.com staff: All five of their writers making picks chose the Eagles to prevail in this one, including Darryl Slater, who predicts a blow out 'W':

This would be an embarrassing loss for the Eagles, but the presence of Dwayne Haskins under center for Washington could bode well for Philadelphia. Haskins might wind up being a good player, but he’s not that right now.

The Eagles have no chance to make the playoffs if they continue to play as poorly as they did against the Giants on Monday night, but that victory should keep them motivated to push for at least one more against a terrible division rival. Philadelphia is banged up, but so is Washington. Even with the receiver issues around him, Carson Wentz should find enough mismatches against the Redskins' secondary to adequately compliment the running game and score enough points.

The Eagles played the Redskins in Week 1 when they had a much more explosive offense. They are in more of a grind mode now with their running game and short-to-intermediate passing game. The Redskins' strength is running the ball with a different coach for the rematch in Bill Callahan, but they lost a big weapon with Derrius Guice's latest injury. The Eagles' blitzes will rattle Dwayne Haskins enough to keep him from burning their secondary, and Carson Wentz will do the little things right to win the Eagles another game without looking ahead to the Cowboys.

MORE: The Eagles are so frustratingly inconsistent, they're not even average