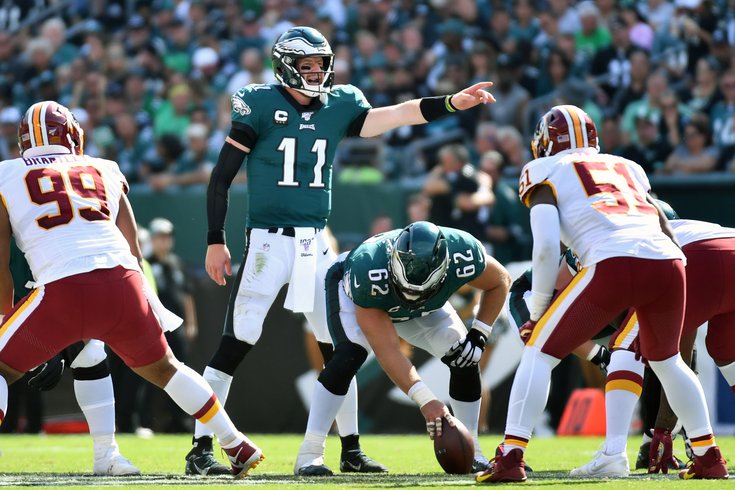 Ah, remember Week 1, when the Eagles were Super Bowl contenders heading into their matchup with Washington?

For the gambling degenerates, here are my Week 15 NFL picks. To note, the team logos indicate who I think will win the game, not cover the spread. At the end of the picks, I'll note a few teams that I like based on the spread.

Jets at Ravens (-15.5): It's setting up nicely for the Ravens to clinch home field advantage throughout the playoffs, after the Patri*ts lost to the Chiefs on Sunday. The Ravens get a speed bump Thursday home game against the already dead Jets, then a couple extra days of rest for their road date in Cleveland Week 16. If they win those two games, they can rest their starters Week 17, get a bye in the wildcard round, and then play a flawed team like the Texans, Bills, Steelers, or Titans in the divisional round. They are the clear Super Bowl favorites right now.

Eagles (-4.5) at Washington: For the third straight week, the Eagles will face a truly terrible team. Offensively, Washington has a good young receiver in Terry McLaurin, aaaaand, that's it. Otherwise, they have a turnover-prone rookie quarterback, a bad offensive line, a 34-year-old running back, and a pair of tight ends on IR. Defensively, Washington will be without its best player, Ryan Kerrigan.

Still, it's not as if the Eagles are good either. They lost to the then 2-9 Dolphins two weeks ago, and needed Carson Wentz to put the team on his back to beat the then 2-10 Giants in overtime Monday night.

The Eagles should cover the 4.5-point spread, just as they should have smoked the Dolphins and Giants the last two weeks. Alas, I don't even trust them to bury teams that can't wait for this season to just be over. I do think that they'll get the job done, but it won't be aesthetically pleasing.

Patri*ts (-8.5) at Bengals: So it appears that the alibis that the Patri*ts are going with for their illegal taping of the Bengals' sideline last Sunday are the following:

Do I have them all?

I'm sure we can take the Patri*ts at their word. I mean, it's not as if:

But yeah, it's all just a huge coincidental misunderstanding, and this is yet another attempt by haters to further the reputation the Patri*ts have as cheaters.

Seahawks (-6) at Panthers: In my opinion, the Panthers are in the conversation for worst team in the NFL, and they might not even have a top 10 pick to show for it.

Anyway, the Bucs are playing decent football at the moment, winning three straight games, while the Lions have lost six straight, and are on their third quarterback. Why is this line only 3?

Bears at Packers (-4.5): Despite their records, I think these teams are a little closer than most realize. Over the last month or so, the Packers have not been an impressive football team, while the Bears have woken up some. I'll take Green Bay to win, but I do like that 4.5-point line for the Bears.

Broncos at Chiefs (-9.5): Rookie quarterback Drew Lock has looked good in his first two NFL starts, but he'll have a difficult matchup this week against a blitz-happy Steve Spagnuolo. Also, why wasn't Lock playing sooner?

Dolphins at Giants (-3.5): This is a game seemingly with huge draft order implications, as the Giants currently have the No. 2 overall pick, while the Dolphins would pick fourth if the season ended today. A look at the current draft order, via Tankathon: 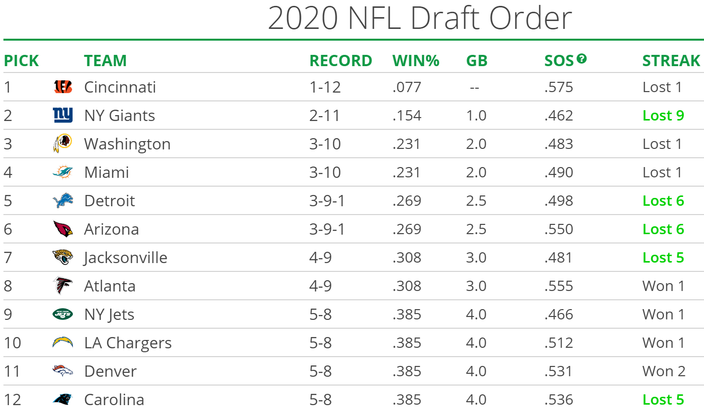 However, the 2-11 Giants are unlikely to move from that No. 2 overall pick. They are ensconced there, as they have a bit of a buffer between themselves and the 3-10 Dolphins and Washington team, since they would (currently) hold the strength of schedule tiebreaker even if they won another game.

Texans at Titans (-3): In their last four games, the Titans have beaten the Chiefs, and then a trio of bad teams, but by at least two touchdowns in each game. Suddenly, people are talking about Ryan Tannehill getting either a long-term deal or a franchise tag.

Browns (-2.5) at Cardinals: Baker Mayfield is trash as a leader, but the Browns have enough talent to take down a Cardinals team that has lost six straight.

Jaguars at Raiders (-6.5): Above I noted that the Panthers are in the conversation as the worst team in the NFL currently. Well, the Jaguars would be in that conversation for me as well. The Jags are 0-5 in their last five games, by a combined score of 174-57. And it's not as if they've played great competition. The combined record of the teams they played during their five game losing streak is 33-32.

I hate laying a lot of points, just generally speaking, and I sure as hell don't like laying points on a team like the friggin Raiders, but the Jags have quit.

Rams (-1) at Cowboys: This line opened at Cowboys (-4)!!! What?!? Like, I get that Vegas is very aware that dopey homer Cowboys fans will bet the Cowboys no matter what the line is, but I think that even the homeriest of their homers realize how badly their team is falling apart.

Falcons at 49ers (-10.5): This is a sneaky game for the Niners, in my opinion. They're coming off a huge road win in New Orleans, and have division-deciding games upcoming against the Rams and Seahawks Weeks 16 and 17.

It'd be easy to overlook the 4-9 Falcons, who have looked decent recently.

Bills at Steelers (-2.5): When I saw this matchup initially, my brain was just kind of conditioned to go, "Steelers." However, this Bills team is obviously healthier, and they're 5-1 on the road this season.

Colts at Saints (-9.5): Golf clap for Frank Reich and the Colts for holding it together as long as they did after Andrew Luck unexpectedly retired just before the start of the season, but they're done.