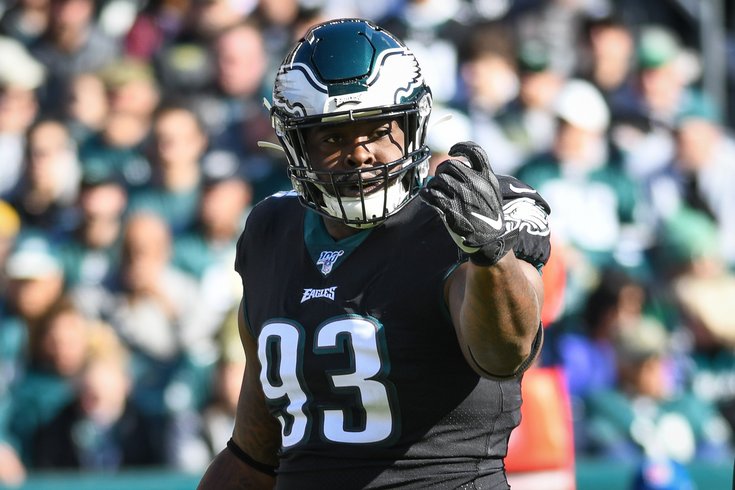 Perhaps the first warning sign that this Eagles season was going to go according to plan should've come back in Week 1 when the Birds got off to a slow start and likely wouldn't have beat Washington had it not been for two deep-ball touchdowns from DeSean Jackson. Philly, however, did come away victorious in that one, and it may have blinded us to the real issues that were waiting to surface.

Since then, it's been quite the up and down season for Philly, with what feels like way more lows than highs despite the fact that the Eagles are, in a sense, right where everybody hoped they'd be: in control of their playoff destiny in the NFC East with three games left to go.

But for a team that's playing without it's starting running back in Jordan Howard and will likely be without all three of their top wide receivers — DeSean Jackson (IR), Alshon Jeffery (IR) and Nelson Agholor (knee, questionable) — when it travels to Washington on Sunday, that's little consolation. They'll still need to come away with a win in order to maintain control in the NFC East heading into next week's matchup with the Cowboys.

Luckily for the Eagles, they should still have enough to beat Washington, who will be lead by rookie quarterback Dwayne Haskins. He's 2-3 as a starter since taking over for Case Keenum, the quarterback the Eagles faced in Week 1, and has been helped by the fact that their defense hasn't allowed more than 21 points in any of his last three starts (two wins).

So, how will Sunday's game at FedEx Field play out? Let's take a look at what our writers have to say about this Week 15 matchup...

For the third straight week, the Eagles will face a truly terrible team. Offensively, Washington has a good young receiver in Terry McLaurin, aaaaand, that's it. Otherwise, they have a turnover-prone rookie quarterback, a bad offensive line, a 34-year-old running back, and a pair of tight ends on IR. Defensively, Washington will be without its best player, Ryan Kerrigan.

Still, it's not as if the Eagles are good either. They lost to the then 2-9 Dolphins two weeks ago, and needed Carson Wentz to put the team on his back to beat the then 2-10 Giants in overtime Monday night.

The Eagles should cover the 4.5-point spread, just as they should have smoked the Dolphins and Giants the last two weeks. Alas, I don't even trust them to bury teams that can't wait for this season to just be over. I do think that they'll get the job done, but it won't be aesthetically pleasing.

The Eagles didn't exactly make me into a believer last week, but they didn't do enough wrong to have me wanting to pick the Redskins in this one.

The schedule did Philly a favor, and somehow they can run the table and win the NFC East. Heck, they can lose in Week 15 and still win the NFC East by beating the Cowboys and Giants in their last two.

I think if the Eagles can find a way to keep Terry McLaurin under wraps, this one should be cake from a defensive perspective. Dwayne Haskins isn't making anyone lose sleep, and neither is Washington's defense, ranked 18th overall in total yards allowed per game and 21st in points allowed.

If it's the former, the Eagles should be fine. But if it's the latter, they're going to be embarrassed again on Sunday. Unfortunately, I just don't think the Birds will have enough offensive firepower to get the job done on Sunday. Without any of their starting wide receivers, Carson Wentz will be throwing to Zach Ertz, Dallas Goedert, Greg Ward, J.J. Arcega-Whiteside and some guys you've probably never even heard of. The Washington defense has been just OK this season — their last place offense hasn't been doing them any favors — but they've been playing well of late and there's just very little on this Eagles offense to scare them.

And if the offense struggles to get going, that's going to mean the defense could find itself on the field quite a bit this Sunday. They're certainly good enough to shut down Haskins and the Washington offense, but as we've seen in recent weeks, when the Eagles offense is a stream of endless three-and-outs, the defense gets stuck picking up the slack.

This could very well be a relatively low-scoring affair, and I don't think that bodes well for Philly.

Against my better judgment, I’m going to look at that closing stretch from Carson Wentz and Co. as a potential turning point for the team. They reached back and found what it took to win when many of us assumed they were dead, and they’re up against another team they should beat this week, albeit one who has played teams tough in recent weeks.

I look forward to seeing this prediction blow up in my face in spectacular fashion.

Call this another whirl on the  Eagles wonderful putrid tour. The Redskins are last in almost every pertinent offensive metric. They have a rookie quarterback who doesn't know which end is up.

Yes, the Boston Scott-Greg Ward-Josh Perkins led Eagles may be too much for them.

That pretty much says it all.