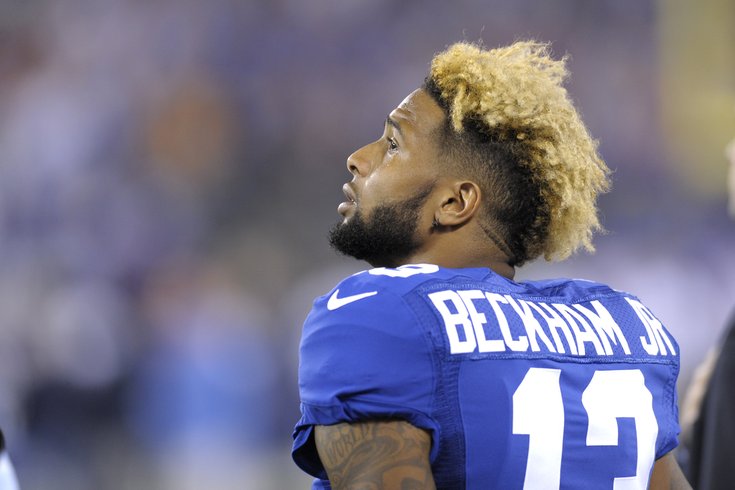 With a huge game against a division rival on the horizon, the Eagles were lucky to escape their Week 5 win over the Saints without any major injuries; Nelson Agholor (ankle) seems to have gotten the worst of it.

However, Thursday is the midway point between their 39-17 victory and Monday's primetime matchup against the Giants, and there are a few Eagles whose lingering injuries may force them to sit out against New York.

Agholor, who said a day earlier that his MRI results looked fine, was not out in pads when practiced began Thursday. He, at the very least, will be a limited participant. And if we've learned anything this season from how Chip Kelly deals with players who miss practice, it's safe to assume that the former USC wideout's role will be limited Monday night, even if he dresses.

Joining Agholor were injured linebackers Mychal Kendricks (hamstring) and Kiko Alonso (knee). Kendricks missed all of the Saints game after re-aggravating his hamstring -- he originally injured it in their Week 2 loss to the Cowboys -- on the first series against the Redskins. Alonso, who was also injured against the Cowboys, remains sidelined.

Considering how well rookie Jordan Hicks has played filling in for the two ILBs, it would be foolish to rush with player back before they are 100 percent. Alonso has a history of knee injuries -- which never bodes well -- and Kendricks has already re-injured his hammy once this season trying to return, perhaps before he was completely ready. On Wednesday, defensive coordinator Bill Davis said Kendricks is day-to-day.

Defensive lineman Brandon Bair also remains out for the Eagles with a groin injury. However, Cedric Thornton and Taylor Hart are both healthy, meaning Bair may have been a gamely inactive anyway.

Luckily for the Eagles, they seem to be the healthier team in this matchup. The Giants have 11 players -- including several starters -- on their injury report.

For starters, wide receiver and 2014 AP Offensive Rookie of the Year Odell Beckham, Jr. (hamstring) has not practiced yet this week and was not expected to practice Thursday.

In New York today, Odell Beckham will not practice today ahead of Monday night's game vs Eagles

He torched the Eagles in last year's (meaningless) regular season finale to the tune of 12 catches, 185 yards and a touchdown.

Another Eagle killer, Victor Cruz, will likely be sidelined. He hasn't played since suffering a season-ending knee injury against the Eagles in Week 6 of last season. There's also questions as to whether or not WR Ruben Randle will be able to go, although he was expected to practice on Thursday.

On the other side of the ball, there was a new addition to the Giants injury report on Thursday.

Cornerback Prince Amukamara will not play against the Eagles. He's out two to four weeks with a partially torn pectoral muscle. That's a big loss for a Giants defense that already has three linebackers -- including Jon Beason -- and a pair of defensive ends listed on their injury report.

Here's the full pre-practice injury list for the Giants, according to NJ.com's Jordan Raanan:

Check back a little later as I'll update this post with the official post-practice injury reports that the teams send out.