Chip Kelly says he has no interest in leaving the Eagles for USC, or any college 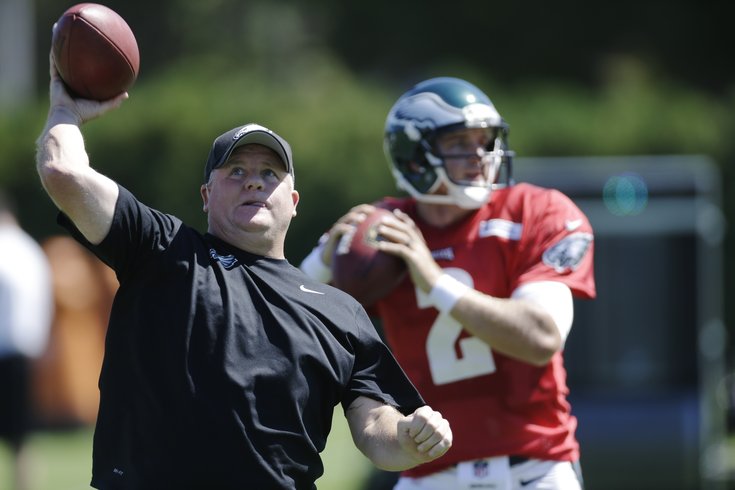 Chip Kelly DOES seem to like USC quarterbacks. He throws better than them too.

As we noted here earlier in the week, ever since Chip Kelly landed in Philadelphia, sportswriters have for some reason linked him with whatever latest major college football program suddenly had a new opening. The latest such opening is USC, who fired head coach Steve Sarkisian, who is reportedly battling alcoholism.

And sure enough, Kelly was asked if he had been contacted about leaving for USC.

"No. No. No. No. No," said Kelly to reporters today. "North Texas. State. The Armadillos, or whatever. Just keep asking questions like this in press conferences, and it'll be over quicker. What do you want to talk about? Let's talk about another college. You have 10 minutes, so let's talk about North Texas... I know you have an obligation. I understand it. It's going to happen. If we're not successful and we're not winning, (the talk will be that) I came from college and I'm going to go back to college.

"I hope some day to be like coach Coughlin and win enough games where I can stay around long enough where that speculation ends. But I understand you have to ask the question. I answered it the same way a year ago, and I answered it the same way my first year here. It's an unfortunate part of the game because the other part of it is the people that have lost their jobs. A friend of mine, Steve Sarkisian, is dealing with a big issue and I wish him the best with the whole thing. That's how I look at it, with that situation."

As for how this type of speculation might affect "the locker room," Kelly was unworried.

"Our players (couldn't) care less about it," he said. "Ask them, I guess. I don't think Jason Kelce is really concerned because my name came up with a college. I think he's concerned with going up against Steve Spagnuolo's defense, which is what's first and foremost on our team right now."

There has never once been any concrete information to emerge that Kelly has any interest in heading back to coach another college program. But, the second another major college has a head coach opening, you can be 100% sure Kelly's name will be linked with it yet again.