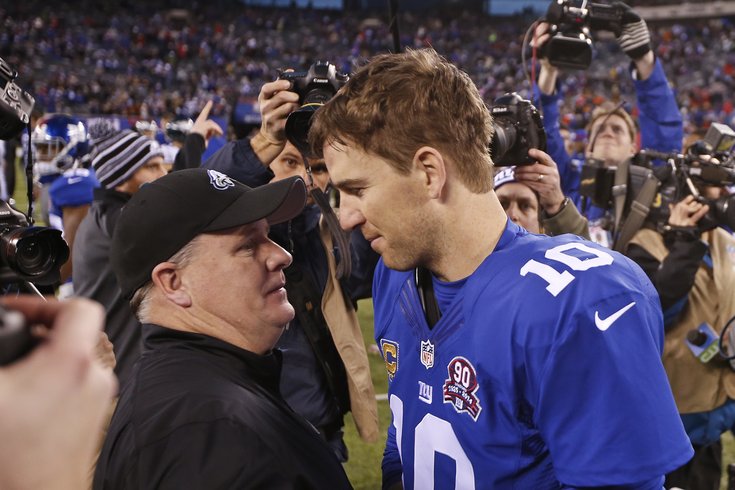 OMG CHIP AND ELI ARE GOING TO KISS!

For the gambling degenerates, here are my Week 6 picks. To note, the helmets indicate who I think will win the game, not cover the spread. At the end of the picks, I'll note a few teams that I like based on the spread.

Redskins at Jets (-6): The Jets' defense has been outstanding this season. It allows just 13.8 points per game (best in the NFL), 4.5 yards per play (2nd best), 16.8 first downs per game (2nd best), and opposing offenses are converting just 32 percent of their third conversions (4th best). They also force the most turnovers per game in the NFL (3.25 per game), and they're facing the most interception-prone quarterback in the NFL in Kirk Cousins. I like the Jets to the extent that they'll beat bad teams, but not so much that I'd trust Ryan Fitzpatrick to cover a six-point spread. Take the Jets to win, but Washington to cover.

Cardinals (-3) at Steelers: Michael Vick picked up a win last week with an impressive late drive in San Diego, however, he has looked very awkward in Pittsburgh's timing-based offense. I've really come to respect "Michael Vick the person," but at this stage in his career, I'm inclined to pick against "Michael Vick the player" any chance I get.

Chiefs at Vikings (-4): The long-awaited rematch of Super Bowl IV! Actually, one of the weird quirks of the schedule this year is that there are only four weeks this season in which there isn't a rematch of a past Super Bowl. Is that weird? Some who is better at math and probability than I am please let me know if this is out of the ordinary. Or maybe the NFL did that on purpose because it's Super Bowl 50 this year. This week there are three of them:

I spent way too long researching that just to make a Chiefs-Vikings pick. Anyway... Vikings, I guess.

Bears at Lions (-3): Ugh. This is like picking between a turd sandwich, and, well, here you go. The Lions benched Matthew Stafford last week and are the only winless team in the NFL. While the Bears have somehow won two straight games, they have a truly awful team and are going nowhere this season. I'll take the Lions here, I guess, with no conviction whatsoever. If you bet this game, you have problems.

Broncos (-4) at Browns: If you saw that the Broncos were going to be 5-0 before the season began, you'd think that Peyton Manning was dominating the way he used to. Nope. He's been really bad, frankly. He is currently 30th in the NFL with a 77.3 QB rating. However, the Broncos' defense has been incredible this season. They are first in yards allowed, at 278.0, and they lead the NFL with 22 sacks.

Texans at Jaguars (Pick 'em): The Jaguars are a perennial "bottom 5" team, and it doesn't look like it's getting much better. They have the worst point differential in the AFC, at -52. Since 2012, the Jaguars are 10-43. Why in the world is this game a "pick 'em?" I mean, I'm not a Texans guy by any stretch. Frankly, I kinda think their defense is wildly overrated, and they have an offense being run by Brian Hoyer or Ryan Mallett, depending on whatever mood Bill O'Brien is in. But still, who would actually bet on the Jaguars at even money to win a football game? 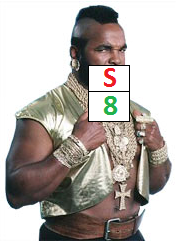 Dolphins at Titans (-2): The Dolphins fired Joe Philbin and made Dan Campbell the interim head coach. One thing I love about new coaches is their initial press conferences. They always say they want to be more physical, more aggressive, smarter, etc. I want to see a guy up at the podium say, "We want to be the most passive, dumbest, wuss football team you've ever seen. Apparently, Campbell is a "tough guy," according to everyone. Is Dan Campbell playing? Because I don't think "toughness" means jack if he isn't. You know who else is tough? That's right -- Mr. T. But Mr. T isn't winning any football games.

Panthers at Seahawks (-8): As we've noted in our hierarchy/obituary series, the Panthers have played a slate of terrible teams. In fact, the Panthers' first four opponents have a combined record of 5-15 with a combined point differential of -168. Still, I'm not sure exactly what the oddsmakers have seen in the Seahawks so far this season to make them eight-point favorites over them. Seahawks to win, Panthers to cover.

Chargers at Packers (-10.5): Last week, Aaron Rodgers threw his first INT at Lambeau Field after 49 consecutive TD throws there. He sucks. Couldn't get to 50. What a choker. This week he'll get back to work in Green Bay against one of the perennial most overrated teams (often by me) in the NFL. The Packers are starting to get huge point spreads even against average teams.

Ravens (-2.5) at 49ers: At -65, the 49ers have the worst point differential in the NFL. Meanwhile, if not for Josh Scobee, the Ravens would be 0-5. Still, the Ravens are clearly the better team here, as John Harbaugh will travel to San Francisco to avenge his brother's falling out with the Niners. OK, probably not, but that's what I'm going with.

Patri*ts (-8) at Colts: Is Andrew Luck going to play? Is he going to sit? Who cares? The Patri*ts are a juggernaut right now, and the Colts aren't anywhere near as good a team as many (self included) thought they'd be before the season began. For the second straight week, Tom Brady has reason to stick it to his opponent for personal reasons. Last week, Greg Hardy was yapping about Brady's wife. This week, Brady may conjure up the Colts tattling on him about deflated footballs during the playoffs last season. I expect the Patri*ts to roll, Luck or no Luck.

Giants at Eagles (-4.5): Is the Eagles' offense back, or was their stomping of a terrible Saints defense just a one-week aberration? Last season the Giants gave up 4.9 yards per carry, which was worst in the NFL. This year, they have a new defensive coordinator who is committed to stopping the run. Through five games, the Giants are allowing 3.5 yards per carry, which is tied for best in the NFL. However, because they're dedicating more guys to the box, they've been exposed on the back end, as they have the worst pass defense in the league, allowing 304.2 passing yards per game.