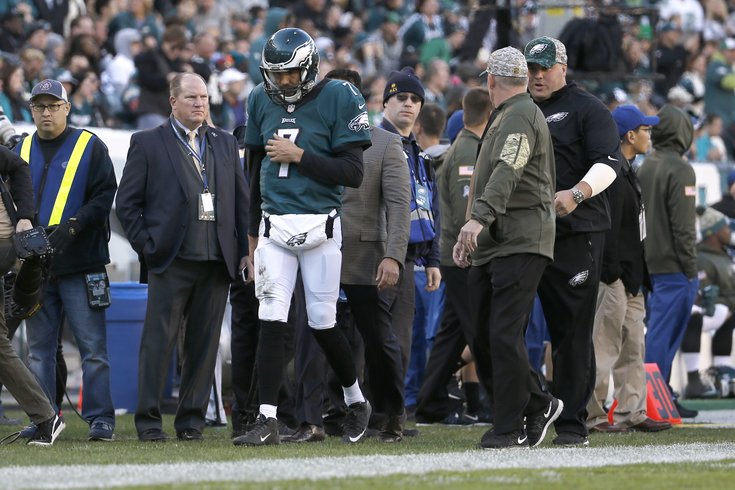 The Eagles' injury report lists nine names this week. As expected, Sam Bradford will not play. The other big name to watch as we get closer to game day remains Jason Peters, who was officially listed as questionable. Here's a look at the Eagles' and Buccaneers' injuries, with analysis.

• QB Sam Bradford (concussion, shoulder): As expected, Sam Bradford will not play against the Buccaneers. The Eagles will officially not have a quarterback start all 16 regular season games for the 21st time in the last 25 years. Sanchise time.

• RB Ryan Mathews (concussion): Ryan Mathews' nagging injuries haven't stopped him from being productive whenever he has gotten opportunities, as he has played through an assortment of injuries, including a groin injury last week against the Dolphins. On the season, Mathews is running for 6.1 yards per carry. However, he has not passed the concussion protocol and will not play Sunday. Earlier today, we covered how his absence will affect the Eagles' rushing attack.

• S Jerome Couplin (shoulder): Couplin remains on the 53-man roster, after we reported a week ago that he could head to injured reserve. Because the Eagles don't have a lot of injuries in number, they have room on the inactive list, so the Eagles have time to let Couplin heal.

• OT Jason Peters (back): In Peters' first game out against the Cowboys, the Eagles OL held their own. Against the Dolphins last week? Not so much. Peters is as important to this team as anyone. According to the injury report, Peters did not participate in today's walk-through, which is obviously a bad sign.

If he cannot go, Lane Johnson will again move over to LT, with the struggling Dennis Kelly again filling in at RT.

We will update the injury report when the Buccaneers make theirs available.