Five matchups to watch Sunday between the Eagles and Buccaneers 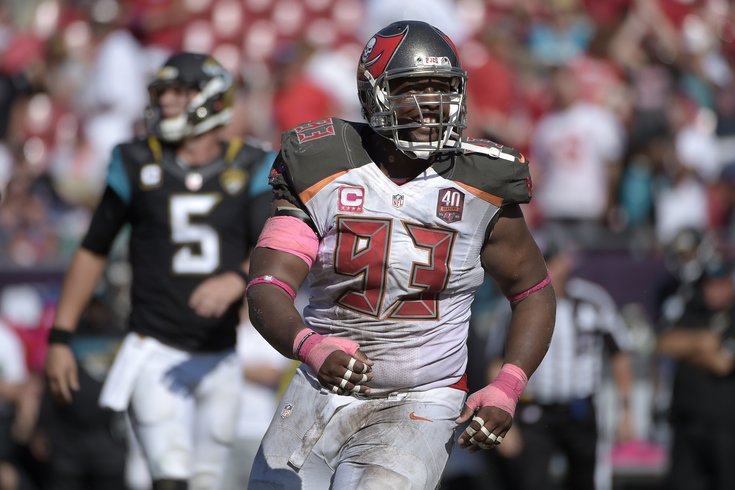 The Eagles cannot allow Gerald McCoy to wreck the game like Ndamukong Suh did last week.

The Philadelphia Eagles and Tampa Bay Buccaneers are a pair of flawed 4-5 teams who will match up this Sunday in Philadelphia. The Eagles come in on a low note, after suffering one of their worst defeats of the Chip Kelly era, while the Bucs come in as a confident bunch. Here are five matchups to watch.

1) The Eagles' rushing attack vs the Buccaneers' run defense

As we've seen this season, the Eagles go as their run game goes. When the Eagles have not been able to run the football successfully, Sam Bradford has not shown that he can put the team on his back and get wins. The same can probably be projected for Mark Sanchez.

MORE ON THE EAGLES: For Eagles, tempo = No Darren Sproles | Week 11 NFL picks | Eagles so banged up they can't even keep all their injuries straight | What they're saying about the Eagles: Tampa Bay edition | Riley Cooper and Miles Austin can't be gone soon enough | Eagles measure themselves on 'points per drive'

This Sunday, the Eagles will face a Bucs D that allows the third-lowest yards per rushing attempt in the NFL, at 3.6. They have also allowed no runs of 40+ yards, and only three runs of 20+ yards. Only one team has allowed fewer. In that sense, this is a bad matchup for the Eagles offense.

On the 2015 season, among players with at least 250 pass attempts, Jameis Winston has the sixth-highest INT percentage in the NFL.

That's a carry-over from Winston's final season at Florida State, when he threw 18 INTs.

Meanwhile, Winston has only been sacked 16 times this season. That is emblematic of a quarterback who will force the ball rather than eat a sack. The Eagles' pass rush must put pressure on Winston so he forces those ill-advised throws.

3) Mike Evans vs the Eagles' cornerbacks

Evans is a second year receiver with incredible size, at 6'5, 231, and is clearly the Buccaneers most dangerous weapon in the passing game.

"He's a tough matchup," said Chip Kelly. "The first thing that jumps out at you, obviously we saw him coming out of college, is just how big he is. He looks like a basketball player. He's in the Brandon Marshall, Dez Bryant size, physicality-type thing. So he's one of those guys, and I think Jameis [Winston] seems like he's developed a comfort level with him that he's one of those guys that it looks like he's covered, but he may not be covered because you can throw it up and he can go get it.

"He's a vertical threat. He's got very good speed for someone that size. Sometimes when you get a guy that's that big, they're not a deep threat down the field. But he's obviously is a deep threat and is their number one target, and by far, he's the number one receiver that we have to – especially with [Vincent] Jackson being out recently and [Austin] Seferian-Jenkins being out recently, I think Jameis has really leaned on Evans. We have to know where he is. They line him up in multiple positions, so we have to know where he is at all times on the field."

Bigger receivers like Evans are the reason why the Eagles have made a concerted effort to acquire bigger cornerbacks. Evans has had issues with drops, and the Bucs are only completing 47.1 percent of the passes that go his way.

Last week in our five matchups between the Eagles and Dolphins, we noted that Ndamukong Suh had the ability to wreck a game:

I'll keep this short and sweet. Ndamukong Suh has the ability to wreck a game. With stud pass rusher Cameron Wake out for the season, the Eagles would be wise allocate extra resources to the interior of the offensive line and give Tobin some help.

The Eagles didn't do a good enough job taking Suh away, and he did indeed wreck the game. This week the Eagles will face another enormously talented DT in Gerald McCoy, a former No. 3 overall draft pick.

"I think sometimes the credit goes to who you're playing," said Chip Kelly. "I think the performance that Ndamukong Suh had last Sunday was a factor in that. I think that's part of it. I think sometimes we always look at, ‘How come this guy played so poorly?’ Well [maybe it’s], ‘How come that guy played so well?’ Sometimes you're playing against a really good player, and it was a tough matchup. We knew going into the game, he's the premier defensive tackle that we've faced so far this year. We're going to face another one this week and get another challenge this week in Gerald McCoy."

The Eagles had the Dolphins buried in the first quarter last week. The Dolphins were playing like crap, and already thinking about getting back to the beach. And then the Eagles eagled. They missed a field goal, they had a punt blocked, receivers weren't ready for passes coming their way, they had a TD called back because they couldn't get lined up properly, etc etc. You all saw it. It's not like the Dolphins played well in that game... at all. They were terrible. The Eagles managed to be worse.

The Buccaneers were picking first in the draft seven months ago. This is a team the Eagles have to bury.