Malcolm Jenkins grew up trying to be like Eagles' Brian Dawkins – and, boy, has he succeeded 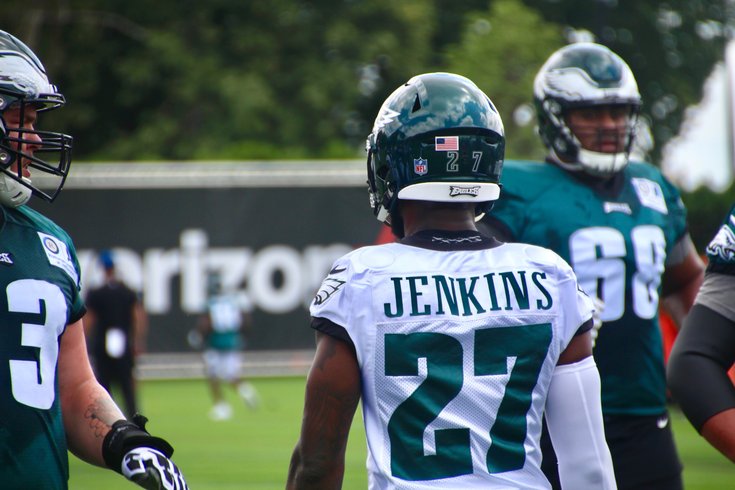 There are so many reasons Brian Dawkins will be forever loved in Philadelphia. And those only became more amplified as the Eagles somewhat unsurprisingly struggled for years to replace one of the greatest players in franchise history.

In the immediate aftermath of Dawkins' unceremonious departure from the Eagles following the 2008 season, one that would leave a bad taste in his mouth for years to come, Eagles fans began searching for "The Next Dawkins." It seemed like every year a new guy would be brought in and fans would wonder, "Is this the one?"

Ultimately, however, it seemed like each time that question would quickly morph back into, "When are we going to replace Dawkins?" And this happened year after year, right up until it didn't.

Over the past few seasons that line of questioning has ceased altogether — and that silence happens to coincide perfectly with the arrival of Malcolm Jenkins back in 2014. Now, after Jenkins helped lead the Birds to their first Super Bowl title — something Dawkins, for all his accolades, was never quite able to capture — it doesn't seem like those questions are going to be returning any time soon.

It might be borderline sacrilegious to call Jenkins this generation's Dawkins — and maybe that's why you haven't heard it shouted from every corner of Eagles country — but the comparisons are nearly impossible to ignore. Their styles may be different, but their impact on the game (and beyond) can be hard to measure at times.

The captain of the defense (and arguably the entire team, especially after quarterback Carson Wentz was lost for the season)?

The ability to change a game with a big hit — and to do so when the stakes are the highest?

A leader on the field, in the locker room and in the community?

NFL star @MalcolmJenkins: "We can talk about social issues and still have a great game."

The @Eagles player sat down for an exclusive interview with @LesterHoltNBC to discuss the social issues players have brought on the field. See more tonight on @NBCNightlyNews. pic.twitter.com/fhhfNzRp5C

And that's why you haven't you heard any fans asking when the Eagles are finally going to find the next Brian Dawkins — it's because they already have.

On Thursday, ahead of Dawkins' enshrinement into the Pro Football Hall of Fame, Jenkins was asked about his predecessor and mentor, his struggles with depression and how the legendary safety contributed to the Eagles' Super Bowl season.

What were your thoughts on Brian Dawkins' revelation about his battle with depression?

"I don't think it's shocking. I think, if anything, it brings a lot of things [close] to home. I think a lot of guys, including myself, deal with some kind of anxiety — at some points in time, depression — so to know that somebody of his stature, somebody that I looked up to as a leader in the locker room, that I try to emulate on the field, [deals with it too], you know that it's not easy and that he deals with some of those same things that we all as athletes deal with. I think it's comforting and inspiring knowing that, especially when you're talking about mental health, the big issue is that a lot of people think that they're alone. And so to know that guys like him who we all view as strong and invincible can share those weaknesses, it lets everybody else know that it's normal and something you should seek help for."

What did Brian Dawkins mean to your childhood?

"For me, he was one of those legends that when you see him on the field, you try as a young kind to emulate his intensity, the way he comes out of the tunnel, the way he talks. And now, in my own career, trying to forge my own legacy, being able to communicate with a legend like that and hear how he sees the game and have him critique what I'm doing on the field and kind of be that mentor has been great for me, for my career, just how I approach the game at this point in time. So I've been grateful, not only for me and my generation as we watched him growing up, and now what he's doing for me individually."

Are you jealous of the unique energy Dawkins was able to play with?

"If I tried to do half of that stuff, I'd be gassed by the first quarter. So, you have a respect for the amount of passion and enthusiasm he brought to the game because even if you try, it's really hard to replicate that. And not only just the pageantry of all the pregame stuff, but how he carried that team throughout the game. Even now, he can be talking about anything, he can be talking about the lunch menu, and he's still going to have the same passion and intensity. That's just who he is ... and that's what makes him special."

What was Dawkins impact on last year's Super Bowl team?

"I think B-Dawk is cognizant of his gravitational pull. So he tries to keep his distance — he doesn't want to make it about him. He'll interject when asked to, even with me. He won't be on my neck every day or calling me all the time, but every now and then, he'll drop a couple hints here or there. But I think from a leadership standpoint, I think he's touched guys individually at different points in time throughout the year. I know at one point he was working with the linebackers after practice; he'll pick a couple of guys and work on their flexibility and bending. So he's looking not only at the DBs, but at the leadership, the entire defense and talking to specific guys that he thinks can improve. And he's doing it all behind the scenes, not out in front. So I think he's probably had a bigger impact than anybody's noticed. But him being around is definitely, definitely something that helps and benefits us."