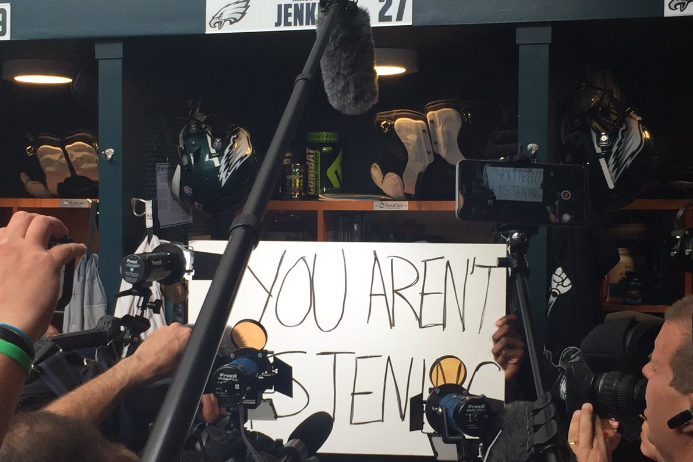 Eagles safety Malcolm Jenkins holds up signs in the locker room a day after President Donald Trump blasted the team and disinvited them from a visit to the White House to celebrate their Super Bowl victory.

The Philadelphia Eagles have been largely silent since President Donald Trump rescinded their invitation to visit the White House on Tuesday. The national spectacle spoke for itself.

Head coach Doug Pederson told reporters on Wednesday that he had been looking forward to the Washington trip, but said there was nothing else he felt required further comment from the team.

After OTA's on Wednesday, safety Malcolm Jenkins took a silent stand as reporters gathered around his locker.

One of the league's most outspoken activists, Jenkins has released a series of statements over the past few days reiterating that NFL protests are driven by a common goal to end police brutality and achieve racial and economic equality in the United States.

In the wake of Trump's criticism of the Eagles, Jenkins cycled through several signs in the Eagles locker room.

Malcolm Jenkins is not speaking to the media. He's holding up signs silently. #eagles pic.twitter.com/EwnLff9jIO

A third listed the names of more than a dozen NFL players under the heading, "True Patriots."

Another pointed out sobering statistics about the nation's prison population swelling as a result of poverty and a crippling cash bail system.

Jenkins, 30, was instrumental as a player representative last season when he helped negotiate a deal with the NFL to secure $89 million for projects nationwide dealing with criminal justice reform, law enforcement and community relations and education.

When the NFL implemented a stricter national anthem policy last month, Jenkins and teammate Chris Long were among several players who felt the move was an unnecessary concession made to President Trump and the NFL's bottom line.

Jenkins may have been quiet on Wednesday, but the message was crystal clear to his teammates.

"Everyone in this locker room understands that everyone's heart is in the right place," tight end Zach Ertz said. "We weren't ok with someone trying to formulate an agenda. Everyone understood Malcolm was vocal in his beliefs, but he also did a lot of amazing work in the community. People love and respect him for doing that amazing work in the community, and that's what's unique in the locker room. People treat each other with respect and respect each other's opinions."