What they're saying: Where (and when) Ertz might get traded, Foles nixed potential Eagles return

Plus, the latest hype on rookie WR DeVonta Smith and more 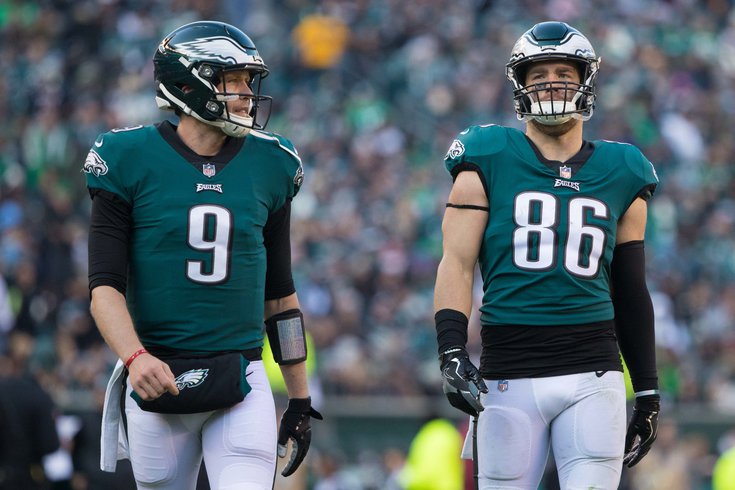 The NFL's 4 p.m. June 1 roster deadline has come and gone, meaning movement is again expected across the NFL. And, as is always the case with the Philadelphia Eagles, the Birds are a team to watch now that the salary cap situation has been shaken up slightly.

[For more on what June 1 means and how it might impact the Eagles, check out Jimmy Kempski's primer right here.]

For starters, Zach Ertz could (and likely will) be dealt before long — and if Howie Roseman can't find a suitor at the price he's charging, he could opt to release Ertz to save some salary cap space that could be better allocated elsewhere. Beyond that, there are big-name players reportedly on the trade block (or at least looking themselves to be dealt) like Julio Jones and Deshaun Watson, as well as remaining free agents who would fill some of the Eagles needs, like cornerback Steven Nelson or linebacker K.J. Wright.

Of course, with the Eagles currently right up against the cap, and still needing to sign their rookies to their deals, any moves Roseman and Co. are looking to make will likely begin with some savings. Alshon Jeffrey and Malik Jackson have already come off the books, freeing up $4 million for the Birds. And an Ertz trade will save them an addition $8.5 million against the cap.

If the Eagles plan on making any significant additions (like trading for Jones or Watson), Ertz will need to be unloaded first. And there could already be a suitor getting their own finances in order with an eye on acquiring the veteran tight end before too long.

Where will Ertz land?

Over at NJ.com, Mike Kaye took a look at seven potential suitors for Ertz, and one name really pops out when you consider the move they made early Tuesday morning: the Buffalo Bills, who re-worked Stefon Diggs contract to free up some salary cap space of their own, according to ESPN's Field Yates.

That's certainly interesting timing, and is perhaps at least part of the reason why Kaye included them, along with other teams like the Cardinals, as possible landing spots for Ertz.

Cap Space: $3.62 million (plus a reported $7.81 million in additional space from Diggs restructure)

How? Trade (or free agency after release)

Why: The Bills and Ertz have seemed like a match for months. The Bills are going all-in with Josh Allen still on his rookie contract, and Ertz would provide a massive upgrade at tight end. Surrounded by weapons, Ertz could boost his stock for next offseason by being a key cog in the Bills’ offense. The Eagles could look to get a Day 3 pick from Buffalo. The Diggs restructure is very interesting.

How? Trade (or free agency after release)

Why: With the Cardinals gearing up to contend with Kyler Murray still on his rookie deal, Ertz would make a lot of sense as a receiving option in their spread offense. Ertz could team with DeAndre Hopkins, Christian Kirk and A.J. Green to create the best receiving quartet in the game. The Cardinals are shopping former Eagles linebacker Jordan Hicks, so a player-for-player swap could be a positive for Howie Roseman, who will look to sell the return in trading Ertz.  [nj.com]

Who are the other five teams? You'll have to click over to find out...

Andy Wong | Revenge of the Birds

Speaking of the Cardinals, it's not just local beat writers who think Arizona makes sense for Ertz. Over at the Cardinals SB Nation site, Revenge of the Birds, Andy Wong listed Ertz as a trade candidate who made sense when he was looking ahead to some post-June 1 roster moves the team could make.

Ertz is coming off a poor 2020 season marred with injuries and inconsistencies. Based on the 2020 season alone, you would have to ask yourself why any team would trade for this guy?

Prior to 2020, he was selected to three consecutive Pro Bowls and was a top-5 tight end in the NFL. He has 561 receptions, 6,078 receiving yards, and 60 touchdowns in his career being one of the top tight ends over the last decade. I cannot remember the last time the Cardinals have had a tight end of his caliber and he would certainly satisfy a need. His wife, Julie, was born in Mesa, Arizona so the Pro Bowl tight end certainly has some ties to the Valley. Any team that trades for Ertz will have to take in his $8.5 million salary but with his quality production over the last decade, he could be worth the price.  [revengeofthebirds.com]

The Cardinals already have the cap space to fit Ertz, and could free up some more with some post-June 1 moves of their own. And one move could be particularly interesting for Eagles fans. With the Birds (the Philly ones, that is) still very much in need of linebacking help and the Cardinals giving Jordan Hicks permission to seek a trade, maybe there's a way the two teams could work something out involving both players — and that would still make some sense for the Eagles, as Hicks' cap hit wouldn't be an issue if their getting that $8.5 million back from shipping out Ertz.

And in that very same post, Wong listed Hicks (for good reason) as a guy who could be on the move...

Less than two weeks ago, NFL Network’s Ian Rapoport tweeted out that Zaven Collins would be the starting MIKE linebacker and the Cardinals granted permission to veteran Jordan Hicks to seek a trade.

1st round draft picks can change plans: The #AZCardinals picked LB Zaven Collins 16th overall, and he is now the starting MIKE backer. The team has given Jordan Hicks permission to find a new home via trade, source said. Hicks is a respected leader & AZ wants to do right by him.

According to Over the Cap, the Cardinals would save over $2.94 million in cap space if traded after June 1st. Though Hicks has his athletic limitations, he has been durable in his two years in Arizona having played all 32 regular season games. Any team that acquires him would be getting a smart team captain and a quality tackler with 268 career tackles as a Cardinal. If he stays put, Hicks would be a great mentor for second-year linebacker Isaiah Simmons and rookie Zaven Collins.  [revengeofthebirds.com]

All of that being said, there's no guarantee that the Eagles are even able to trade Ertz — they may have to simply cut him if no team is willing to give them anything knowing how little leverage Philly has — and even if they do make a deal, nothing says that it has to happen this week...

Talks on a potential Zach Ertz trade have been ongoing for quite some time but fairly quiet of late. At least three TE-needy teams have looked into this. Eagles have made clear they won't part for nothing in return, making a release unlikely. Things could pick back up this week.

It seems like this has already been dragging on forever, so what's a couple more weeks?

Foles says, 'No, thanks'

We'll stick with the trade talk here for a minute, and specifically one that didn't happen. I missed this one when it was first reported because, admittedly, I don't subscribe to Tyler Dunne's site. I guess that's a mistake, since he dropped a juicy nugget last week.

Dunne reported that the Bears were trying to trade Foles back to Philly (presumably before the Birds signed Joe Flacco to be Jalen Hurts' backup to compete with Jalen Hurts for the starting job, but it never happened — and not for the reason you're likely thinking.

The Bears tried cleansing their hands of the Nick Foles mistake by trading Foles back to Philly. Foles didn’t want to go, one source says, so the Eagles refused to trade for a QB who wouldn’t report.  [golongtd.com]

Finally, what would a WTS post be without a little DeVonta Smith hype.

Over at Bleeding Green Nation, Brandon Gowton, who said "there’s a case to be made DeVonta Smith is the most exciting Philadelphia Eagles draft pick of all time," argued that Smith could have the best rookie season any Eagles wideout has ever had. And you know what? I buy it.

Smith just might finally be the solution to the Eagles’ wide receiver woes. As we’ve written about at length, he’s a tremendous talent. And there are no foreseeable roadblocks to him being an instant difference-maker for the Eagles. He’s a polished prospect with the versatility to line up at multiple positions.

One might think the Smith hype unfair to him in that we’re setting the bar too high. Maybe. But, one, this article was inspired in part by a themed post series we’re doing at SB Nation centered around the “greatest of all time.” And, two, I find it hard to temper expectations for Smith after all the good things we’ve both seen out of him and heard about him.

So, let’s get wild and allow ourselves to indulge in the hype. Assuming that Smith will be the stud many of us expect him to be in the NFL, what’s the ceiling for him in Year 1? Could he have the best Eagles rookie receiving season of all time?

Here’s a look back at the franchise record for rookie single-season receiving yards (top 20):

At the very least, it’d be concerning if Smith doesn’t crack the top 10. Especially considering the NFL is adding a 17th regular season game.  [bleedinggreennation.com]

One concern, in addition to not knowing what kind of scheme the new coaching staff is going to run, is the uncertainty at quarterback. If Smith had a perennial Pro Bowler throwing to him, I'd 100% believe he breaks the Eagles rookie record. Jalen Hurts, at least right now, is not that. But he and Smith have a history together, and if the two of them can re-ignite that spark, who knows?