After becoming the first local product to win the league's top honor for a head coach, what's next for the St. Joe's Prep and Penn grad? 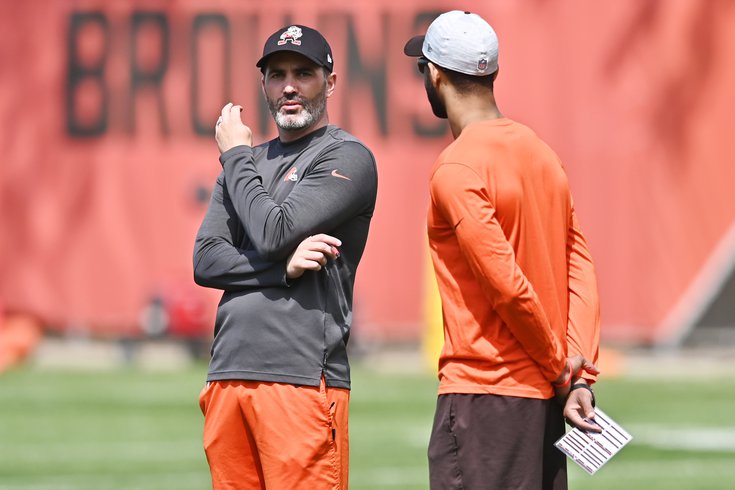 He made Will and Gabe converts. If Kevin Stefanski deserved an award for anything in the 2020 COVID-19 challenged NFL season, it may have been for that alone: Turning his 11- and 9-year-old sons into avid Cleveland Browns’ fans.

Then again, the boys had only to look up to their father as to why. Stefanski, the St. Joe’s Prep and Penn grad who once worked for the Eagles, has made widespread Browns’ converts throughout the country.

We’re talking about someone as a kid who grew up in Drexel Hill, Delaware County, an Eagles’ fan who would pester his mother to stencil in the No. 92 on white T-shirts because he was a huge Reggie White fan.

Now, he’s leading the Browns to victories over the Eagles and the rest of the NFL.

In his first year as an NFL head coach, all Stefanski did was lead the once-lowly Cleveland Browns to the playoffs for the first time in almost two decades—and led them to their first playoff victory in 25 years. He guided the Browns to an 11-5 finish, a five-game improvement over their previous season and their best record since 1994, when another first-time coach landed and dazzled the Cleveland area by the name of Bill Belichick.

To top it all off, Stefanski became the first coach from the Philadelphia area to ever garner the NFL Coach of the Year award. Ironically, he beat out another coach with strong Philadelphia-area roots in La Salle High grad and Buffalo Bills’ head coach Sean McDermott.

But Stefanski honestly doesn’t want to hear any of the accolades he collected and deserved after the 2020 season. To hear Stefanski, it was if the Browns’ success last year had almost nothing to do with him.

His roots and humility stem from the Philadelphia basketball community, which Stefanski was firmly entrenched in as the son of Ed “The Shot” Stefanski, a former 76ers’ executive who currently works in an advisory capacity with the Detroit Pistons.

“I learned a lot this past year, just with everything going on with the pandemic, but I really hope to learn a lot every season,” Stefanski told PhillyVoice during a recent interview. “That’s the goal of constantly growing as a coach and as a person. I think after my first year I definitely learned that I cannot do this by myself.

“There are so many people on a daily basis that allow me to operate with our program and to coach our players. If I tried to do this by myself, I would spread myself way to thin and wouldn’t be able to accomplish what we need to get done. I like to create a collaborative environment and we’ve grown that at the Browns.

“I count myself lucky to work with some pretty amazing men and women.”

Stefanski said he learned as he went along, like the first time you do anything.

“You don’t know until you do it, so the experience I went through will make me a better coach moving forward in Year 2,” Stefanski said. 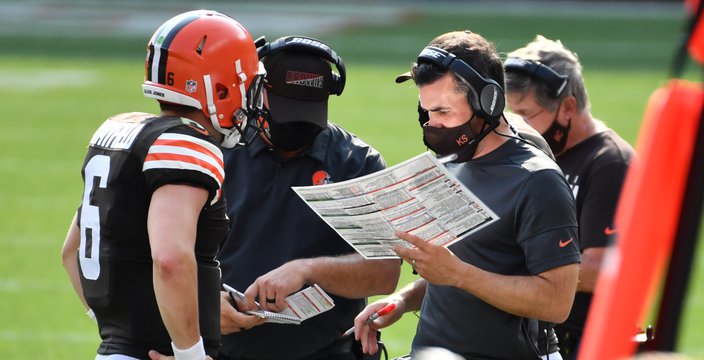 The Browns players love Stefanski’s balance—he doesn’t get too high with success; he doesn’t sink to unthinkable depths with setbacks. They like his approach. They like how straightforward he is. The guy they see on Monday is the same guy they see on Tuesday. The players also like the fact that Stefanski holds himself as much accountable as he does his players.

“I’ve told the guys many, many times that I’m going to be myself, because that’s pretty easy to do every single day,” Stefanski said. “I think players are way too smart when a coach comes in and tries to be something that they’re not. The easy part for me is to show up every day and be the same guy every single day.

“If my players appreciate that, it’s something that I’m actively trying to be for them.”

Stefanski’s biggest strength was being able to simplify. He doesn’t like to over complicate what he does, placing great stock and faith into those around him for input and advice. Like New York Giants’ head coach Joe Judge, another Philadelphia-area NFL head coach, Stefanski is not afraid to hear “no” from assistant coaches or anyone else.

“I’m not even close to being satisfied with last year. There are 31 teams that come away disappointed after the season ends, and I count myself among those 31,” Stefanski said. “That final loss [a 22-17 Divisional Round playoff loss to the eventual AFC champion Kansas City Chiefs] continues to eat at me. Until you win that final game, that’s how it works.

“I think that’s the beauty of our profession. You’re in it to win that last game. That’s why you do what we do. Until that happens, offseasons will be about getting better. That’s what this offseason has been about for me and our coaches and certainly our players. We just have to get better.

What Stefanski did establish is a foundation of a winning culture to build on. There is consistency there in Cleveland to build on. The 39-year-old coach doesn’t want to hear it, but he’s had a lot to do with it.

"I got back to the challenge of proving it every week... I grew up going around town with my dad in the basketball world of Philadelphia, where there was a challenge every day." —Kevin Stefanski

The Browns have had five different coaches in the last five years (Mike Pettine, Hue Jackson, interim coach Gregg Williams, Freddie Kitchens for a season and now Stefanski.) In contrast, the Eagles had one—Doug Pederson, who directed the Eagles to the playoffs in three of the last four seasons he coached—until they fired him this winter and hired Nick Sirianni

“In 2020, I do feel like with Andrew Berry, our general manager, and myself, that we did establish a foundation,” Stefanski said. “But I do know this, every single year you have to reinforce that foundation. That’s what this offseason is about to me. We established something, but we better go back and reinforce it before we try to build upon it.

“I got back to the challenge of proving it every week. There are such great teams and great coaches in this league, and the challenge is what excites me about this profession and about moving forward.

“I grew up going around town with my dad in the basketball world of Philadelphia, where there was a challenge every day. I remember as a kid going to Speedy Morris’ practices and watching Lionel Simmons play. I love the Philly basketball mentality and those are times that I will never forget.”

Stefanski then went on his way on a lazy April Saturday afternoon, taking his sons to toss around the football at the Browns’ practice facility in their Browns’ gear.

A little swag does go a long way.