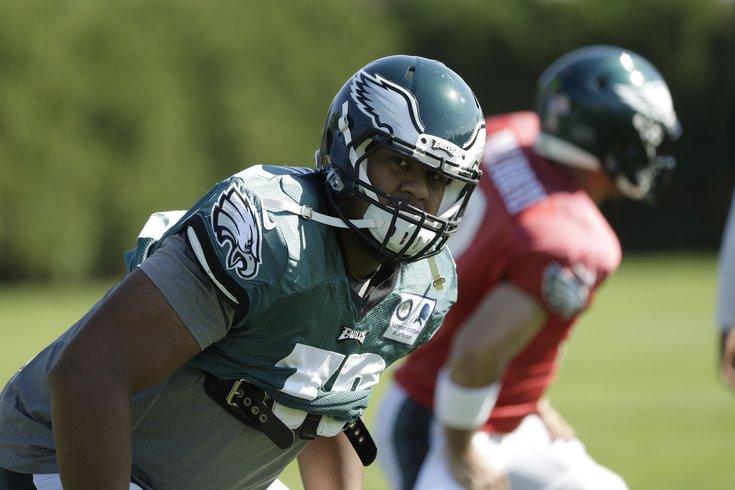 Back in training camp, there were questions as to whether or not Philadelphia Eagles rookie offensive tackle Halapoulivaati Vaitai would even make the final 53-man roster. Eventually, with the potential suspension of Lane Johnson on the horizon in addition to a few injuries, Vaitai's inclusion on the roster became more of a sure thing.

Vaitai has not yet dressed for a game this season, as he has been a mainstay on the Eagles' inactive list. However, on Wednesday, Doug Pederson confirmed a surprising report that Vaitai will get a shot to start at right tackle if and when Lane Johnson is suspended. The premise for that move would be that (A) Vaitai has improved since training camp, and (B) if the Eagles can switch just one offensive lineman, that would be more ideal than moving Allen Barbre to right tackle from his left guard spot, where Barbre has played well.

"He's getting a lot of reps versus a very good defense and versus a very good defensive line," said Reich. "And when we're running scout team, I mean, we're paying attention to that. Stout and Eugene are paying attention and watching ‘V’ and coaching him go against our first-team defensive line. That certainly gives you indicators because when you're running scout team the defense is going full speed, they're going hard. So, it's really a good measure. That's why we push our guys. Those guys that run scout team, it's a good opportunity for them as well."

Reich said he started to see the light go on for Vaitai during the preseason games.

Because Vaitai is facing the Eagles' talented defensive line starters every day in practice, we asked them what they have seen in him. Here's what they said:

"He’s patient. He doesn’t give away his hands too much, and he’s big. He’s able to take the bull rush. He really makes me think when I’m pass rushing, so that’s always the first battle. 'How can I beat him?' When you have to think hard on someone, that means you respect him a lot, so I respect everything he does. He comes to work every day. I think if 'V' had to fill those shoes, he definitely would fit right in.

He’s gotten a lot better (since training camp). I go against him every day, and like I tell him, ‘We’re going to go hard against each other. You get me better, I’ll get him better.’

I think he’s done a great job of what they ask him to do, and he gets us ready every week. I think when it’s his time, he will definitely be ready.

He’s more athletic than people know… Sometimes if you have to chip, like they do in this system, that’ll help him. He’s a rookie, but at the same time, I don’t look at him as a rookie because I’ve been going against him for a while, and sometimes he’ll really be getting me. I have to respect him as a player and I think he’ll do a great job when it’s his time."

"I’m on the other side, so I haven’t gone up against him that much, but I’ve seen him get a lot better since he first got here when I was going against him in the summer in training camp. He’s definitely grown a lot, which is a great sign.

He’s playing more confidently. He’s more sure of himself than he was early on in the summer, and that’s normal for a rookie.

For a big guy – he’s really tall and he’s got long arms – I think he moves well. Once he started playing with more confidence, with his size, he can cover people up and slow them down before they get started."

"He’s a good player, man. He’s definitely a good player. He’s ready. I’m excited for him. One, he works his butt off every day in practice. It’s his time, so we’re excited to watch him play. He does a lot of things well. He has good hand placement, very fundamental, and he takes coaching."

"I think he’s a very good competitive guy. I think he’s physical. Guys can’t move him around a whole lot. He stands his ground, and if something did happen to Lane he’d be a great addition to O-line, whatever they decide to do. But obviously, I don’t play that side of the ball, but I support any decision that the team makes."

Obviously, veterans are never going to trash a rookie to reporters, but perhaps the common theme that is encouraging from the veterans' standpoint is that they seem to agree that he has improved since camp.

If Vaitai is indeed the coaching staff's choice once Johnson is suspended (if indeed he even is suspended), that would be a huge opportunity for the rookie to show that he can be the starter of the future at right tackle whenever Johnson replaces the aging Jason Peters at left tackle.