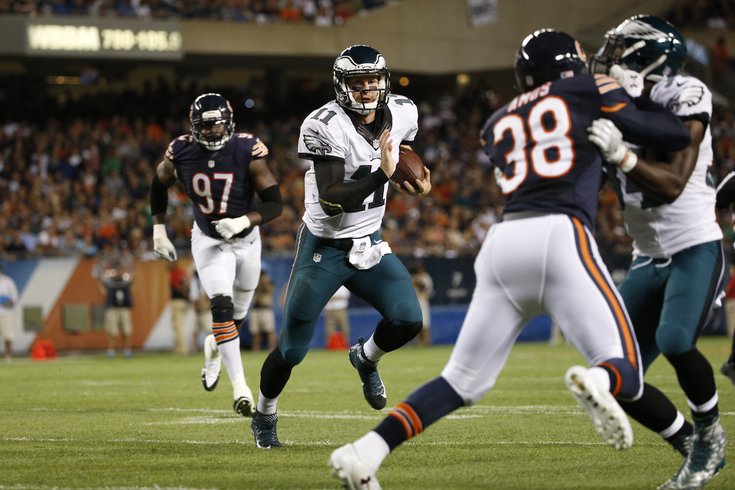 Could we see more of this from Philadelphia Eagles QB Carson Wentz in the not-so-distant future?

Through Carson Wentz's first three NFL starts, Eagles fans likely found themselves holding their breath each time the rookie quarterback decided to tuck the football and run. He hasn't done it often – just nine times for 21 yards – but that could change in the future.

According to head coach Doug Pederson, there's a chance the team starts running some designed run plays for Wentz. However, he did preface his answer by saying that he didn't envision that happening on Sunday in Detroit.

"Probably the deeper as you go into your regular season, if you are in a position to make the postseason, you might increase that a little bit," he said prior to Wednesday's practice. "One of the things that I think defenses sometimes forget – I'm not saying they forget it completely – is the quarterback and the ability to run.

If the Eagles prove the first three weeks of the season were not a fluke, there's no doubt they'll find themselves in playoff contention. And that's when the former Chiefs offensive coordinator believes Birds fans could begin seeing Wentz use his legs more often to keep defenses on their toes.

"I think that was the advantage to us in Kansas City with Alex Smith; his strength was the ability to run the football," Pederson added. "As we got deeper into the season, we dialed up a few more of those for him.

"I think it could be the same type of formula with Carson. Obviously, you want to protect him and you want to get through a full 16-game schedule. But I think the deeper you go, you increase it a little bit more."

If you're taking a longterm view of this team, then keeping Wentz healthy paramount. The 3-0 record, all the accolades and lack of turnovers makes it easy to forget that the second-overall pick didn't make it through his debut before taking a hit that broke two ribs and cost him the rest of the preseason.

Wentz said that in college, he ran the ball "about eight-to-10 times a game" and, to be fair, his rib injury came while he was in the pocket looking to throw. But he doesn't see the need to add any designed QB run plays. At least not yet.

"So far, I can't complain about the play calling," Wentz said with a smile. "I think it's been tremendous. [Pederson] has done a really good job of putting us in situations to make plays. And I trust that he will for the rest of the year as well."

The offensive line has done a good job protecting him to this point -- he's been sacked just four times through three games -- but Lane Johnson's looming suspension is a cause for concern. But ultimately, when it comes to running the ball, it becomes more about self-protection than anything else.

Essentially, there's a lot the 23-year-old can do to keep himself out of harm's way. It's one of the only knocks on Wentz so far, but his coach is seeing improvements.

"Well, he ran out of bounds a couple of times in that Pittsburgh game, once on a scramble," Pederson said when asked how Wentz did a better job protecting himself against the Steelers. "The second one, he obviously made the great play to Darren [RB Darren Sproles]. He’s just seeing himself on film and understanding."

"[He's been] just watching highlights and clips and seeing some of the quarterbacks that are being hurt are in the pocket, which is going to happen," Pederson added. "Others, whether they get out of bounds or slide -- he's seeing that sort of thing throughout the week.

"He learns not only from his mistakes, but he also learns from other teams around the League just by watching and observing what they are doing."

So whose tape has Wentz been studying?

"I think [Seahawks QB] Russell Wilson does a really good job of protecting himself," he said. "He makes plays with his feet. [Panthers QB] Cam Newton takes some shots here and there, but last year he was a guy that I thought did a good job on all of the designed quarterback runs of just protecting himself and taking his shots very sparingly."

Wentz ran for over 1,000 yards (4.8 YPC) and 13 touchdowns at North Dakota State, so there's clearly reason for the Eagles to be interested in taking advantage of their quarterback's ability on the ground. They'll just have to weight that against the added risk of injury that causes fans to hold their collective breath.