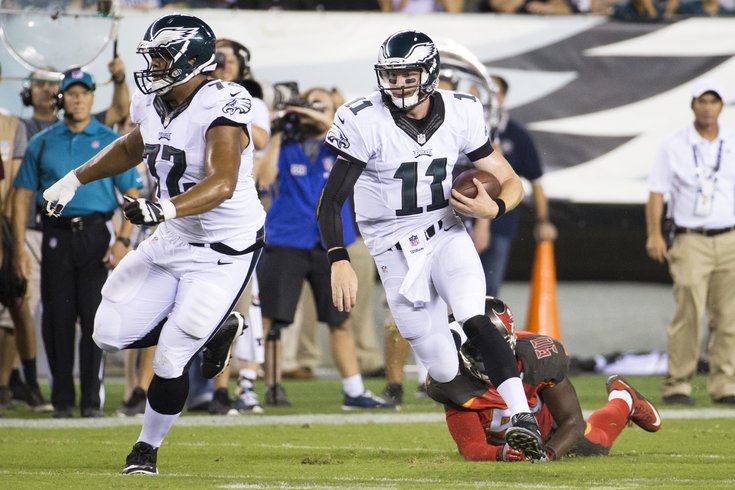 Eagles rookie OT Halapoulivaati Vaitai could be the second rookie on offense from the Eagles' 2016 draft class to crack the starting lineup.

If and when Lane Johnson is suspended 10 games for his second offense for violating the NFL's policy on performance enhancing drugs, the Eagles' original plan was for LG Allen Barbre to move over to RT, with free agent acquisition Stefen Wisniewski filling in at LG.

On Tuesday, Ed Werder of ESPN reported that the Eagles may be giving rookie OT Halapoulivaati Vaitai a shot at the starting RT spot if and when it opens up.

"It’s something we’re considering," said Pederson. "We still have the original (plan) like we talked about before where we move Allen out and possibly put Wisniewski at LG, but I have to take in all the information. And it’s a situation where if we can tweak one spot and not two, it could be better for us that way."

Vaitai has not yet been given reps with the first team offense, but Pederson noted that he has been going up against the Eagles' starting defensive line every day in practice, therefore making him comfortable with his abilities.

"He’s been going against our starting defensive line all of the regular season so far, so the work he has done in that capacity against a good defensive line gives us confidence that if we had to make that decision we could do that and not bat an eye," Pederson explained. "And then going back and evaluating his preseason games and looking at that and where he is, physically, mentally, it puts him in a good position to potentially be that right tackle."

One of the early surprises of the 2016 season has been the solid play of Barbre, who struggled in Chip Kelly's offense a season ago. Barbre's improved play has given Pederson pause about moving him away from LG, thus changing two spots along the offensive line instead of just one.

"Talking with Coach Stoutland, and watching Big V not only through the preseason but also in practices these last couple of weeks, we want to exhaust all the possibilities," said Pederson. "Allen Barbre has been playing great at left guard. If you don’t have to disrupt two positions and just do one, I think there’s some conversation there that we have to have. But Vaitai is definitely in the mix."

This move likely won't happen immediately. Les Bowen of the Philadelphia Daily News reported that Johnson is going to play this Sunday in Detroit while he, the Eagles, and the league wait for a decision to be made Johnson's appeal made to an arbitrator on Tuesday.

Pederson confirmed that he expects Johnson to play on Sunday.

"I do, I do," he said. "It’s kind of a strange deal, but week to week, we just go that route and Big V or Allen or whoever we end up putting over there, we’ll be ready to go, but right now it’s Lane Johnson at right tackle."