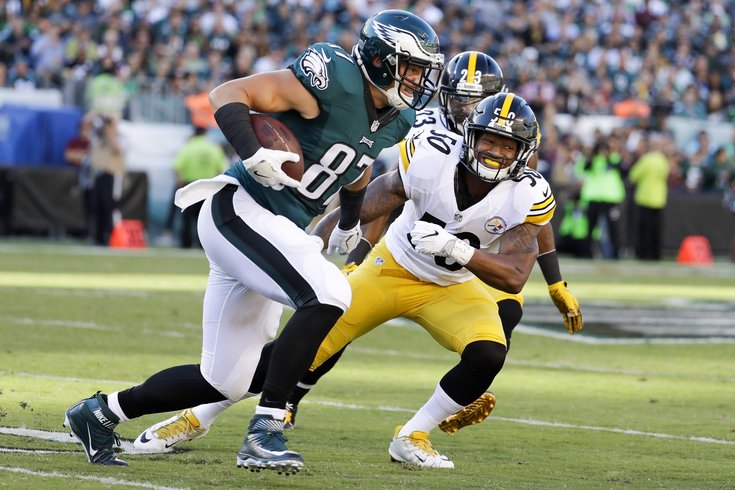 Look for the Eagles to heavily utilize their three tight ends against the Lions' defense.

Over the years, while the Detroit Lions aren't a division rival, they have had a number of memorable games against the Philadelphia Eagles. For example, the last time these two teams matched up, the Lions obliterated the Eagles in front of a national audience on Thanksgiving. The meeting before that was the iconic Snow Bowl.

This year, the Eagles seem to be on their way up, sporting a 3-0 record, while the Lions have struggled early this season, starting 1-3, including two losses to weaker opponents in the Tennessee Titans and Chicago Bears.

Here are five matchups to watch this upcoming Sunday.

1) Carson Wentz against yet another inexperienced pass rush

To put that in perspective, there are 10 active individual players with more than 85 sacks, on their own, including Trent Cole, for example, who has 87.5.

So far this season, the Eagles have allowed just four sacks, which was tied for fourth-best in the NFL prior to Week 4. The Eagles' offensive line has given Wentz time to throw, and he has responded with outstanding quarterback play.

Against the Lions, with stud pass rusher Ziggy Ansah out, the Eagles will be beneficiaries of yet another defensive front seven without proven pass rushers:

55.7 percent of the Lions' career sacks from their defensive front seven starters are coming from Haloti Ngata, who is now 32 and has never had more than 5.5 sacks in any one season, although previously unknown DE Kerry Hyder actually leads the league with 5 sacks.

Still, even with Lane Johnson potentially out, the Eagles should be able to protect Wentz once again.

2) The Eagles' run defense vs. the Lions' rushing attack

After losing starting running back Ameer Abdullah with a torn ligament in his foot, the Lions don't have much in the way of frightening rushers in their backfield.

They're left with just fourth-year pro Theo Riddick, rookie seventh-round pick Dwayne Washington, and second-year pro Zach Zenner. Riddick is the starter, and while he is a very good receiver out of the backfield, he is not an effective runner. For his career, Riddick has averaged 2.98 yards per carry.

The Eagles, meanwhile, are third in the NFL in rushing defense, allowing just 72.0 yards per game. If they can shut down the Lions' under-manned rushing attack, they can make the Lions one-dimensional.

3) The Lions' receivers vs. the Eagles' secondary

In the Eagles' embarrassing loss to the Lions a season ago, Calvin Johnson went off for 8 catches for 93 yards and 3 TDs. This past offseason, Johnson did the rest of the league a big favor by retiring, so the Eagles won't have to deal with him on Sunday.

However, the Lions do still boast a very good trio of receivers in Marvin Jones, Anquan Boldin, and Golden Tate.

As we noted yesterday, the Eagles will likely be getting Leodis McKelvin back from a hamstring strain this week. The Eagles' corners will need the front four to continue to get pressure, as well getting a huge assist from the stud safety tandem of Malcolm Jenkins and Rodney McLeod on the back end.

Expect to see a lot of nickel defense.

4) The Eagles' front four vs. Matthew Stafford and the Lions OL

The Lions have a young offensive line that they have added to with high picks in the draft every year over the last five drafts:

In fact, the Lions added them in order from RT to LT. Because I have too much time on my hands, we'll show you that concept in stick figure gif form:

While the Lions may have set themselves up to have a very good offensive line in the future, for now, they are what they are -- an inexperienced group with a rookie protecting Stafford's blind side.

Only two teams -- the Broncos and Vikings -- are averaging more sacks per game so far than the Eagles, and the Eagles are getting to the passer with only four rushers.

5) The Eagles' tight ends vs. the Lions' linebackers

Back in early August, we suggested that the Eagles should run their offense through their three talented tight ends in Zach Ertz, Brent Celek, and Trey Burton. Unfortunately for the Eagles, they have not had all three tight ends healthy in any one game yet this season, which has meant that OT Matt Tobin has functioned as the third tight end.

Zach Ertz will be returning from his displaced rib injury this Sunday. He said that the Eagles are likely to utilize their three tight end sets more heavily this week.

"We have three really talented tight ends, in my opinion, three of the best in the league," said Ertz. "All offseason there was a lot of work put into that (three tight end) package, and I think it’s going to grow this week because all three guys will be able to catch passes, no offense to Matt. We’re really excited about that package, and I think that’s going to open up everyone else in the run game and the passing game.

"It’s tough to go nickel against three tight ends, but if teams go base or possibly even bigger packages, you have the ability to kind of spread Trey and I out. If you have three really good tight ends who can do both, which in our opinion we can, I think you’d have to ask Schwartz how he’d game plan for it, but in our eyes I think it presents a lot of problems."

After releasing linebacker Stephen Tulloch and being without DeAndre Levy (quad), the Lions are very thin at linebacker. In each of the first four weeks of the season, the Lions have allowed at least one touchdown reception to an opposing tight end.